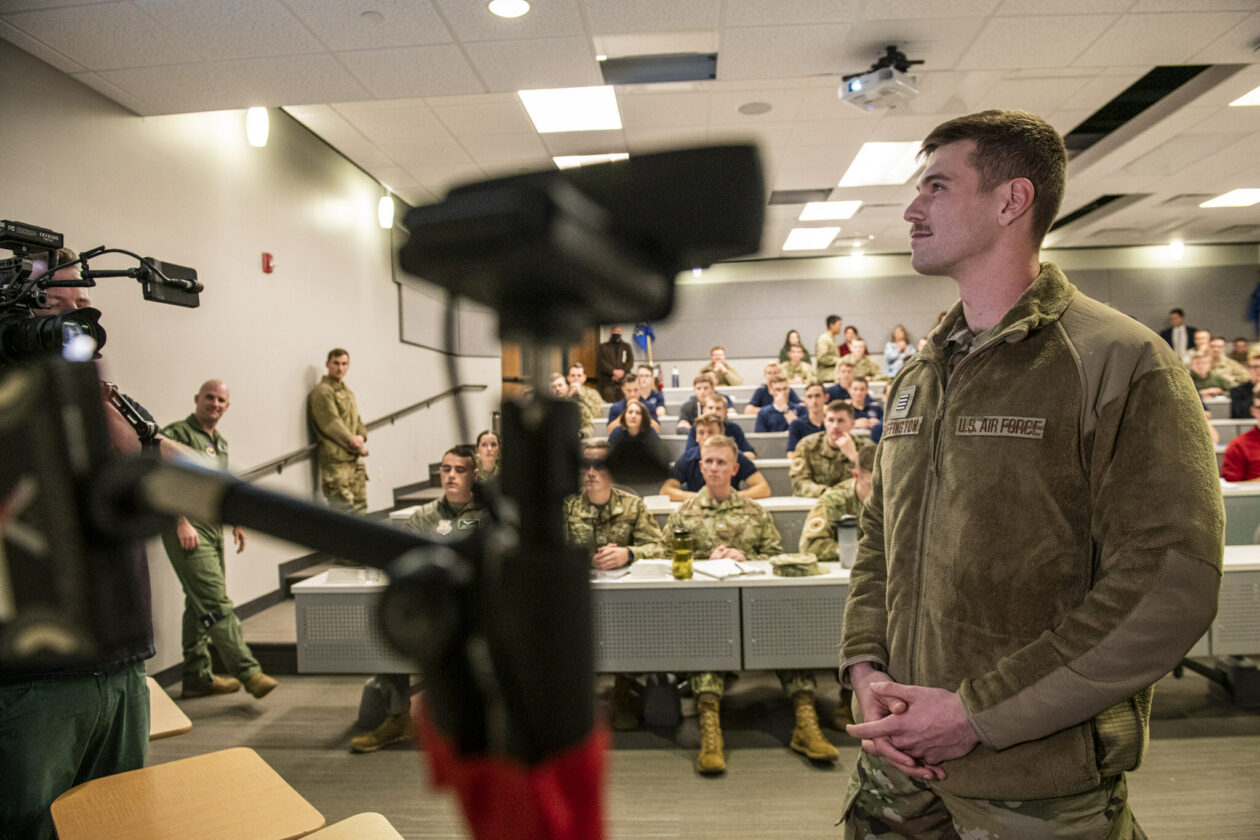 Buffington is one of three students nationwide selected as a Student of the Year through the Navy Federal Credit Union’s ROTC All-American Scholarship Program, with the other two winners representing the Army and the Navy/Marines.

Along with the award, Buffington received a $6,500 scholarship and his ROTC detachment at Missouri S&T receives a $5,000 donation. Buffington will also be recognized at the Military Bowl football game later this month in Annapolis, Maryland.

“I was completely surprised when they told me I had been selected as the top cadet for the Air Force,” Buffington said. “It still feels surreal, but I’m very thankful for it.”

Buffington learned of his award win through a surprise announcement at Missouri S&T the week before Thanksgiving break. He was told it was a normal Air Force training lab with all his fellow cadets in attendance.

“Up until the point I walked in, I had no clue what was about to happen.” Buffington said. “I walk in, see cameras and think, ‘Oh, this is kind of weird.’ I figured out it was more than required training when I saw my mom [Colleen Talley] in the room, because she would not be at my school for an Air Force lab.”

More than 300 cadets were nominated for the award, with every ROTC detachment in the nation able to nominate one cadet. Students were evaluated for their leadership, military excellence, scholarship and service.

Buffington currently serves as the wing commander for the Air Force ROTC Detachment 442 Cadre at Missouri S&T. “As wing commander, which is like the president for other organizations, I sit over a board of other leading cadets,” Buffington said. “That’s been a lot of fun and a completely new style of leadership and high level management for me.”

In his junior year, he served as the detachment’s morale officer, planning extracurricular and service events, and as the field training prep advisor, creating training plans for underclassmen cadets.

As morale officer, Buffington organized a food drive for the Phelps County Faith Distribution. In addition to the food drive, he rallied cadets to help participate in the distribution of the food – packing boxes and helping deliver the food to people’s cars.

Buffington has earned a 3.957 GPA overall at Missouri S&T, with a 4.0 GPA last semester. He also earned a perfect score of 100 on the ROTC physical fitness assessment.

“When I was a kid, I have memories of going into our public library in Jackson and checking out all the airplane books that they had,” Buffington said. “I was always dreaming about flying and liked learning about flight and space and things like that. My mom saw that passion in me and some of my best memories as a kid was us traveling to air shows in the area and seeing the Blue Angels.”

During his childhood, he was also able to fly in a Piper Cub two-seater plane, which helped solidify his interest in flying and carried into his decision to study aerospace engineering at Missouri S&T.

“I actually went into college wanting to be a fighter pilot, but when the Space Force was created, I decided to pursue a commission into the Space Force as a space operations officer doing orbital warfare – which is satellite operations,” Buffington said. “It aligned better with my major and my interests, so I switched even though it was a hard decision and I had done a lot of flying.”

Buffington said he decided to join the military because it balanced his passions with his foundational faith and commitment to service.

“Most foundationally, I want to be in the military and ROTC because the military protects freedoms and protects the American way of life – I think that is worth giving a life of service to,” he said. “Specifically for me, I’m very passionate about my Christian faith. The constitution and its amendments are what guarantees me that right.”

Buffington competed at state in both cross country and track and field while at Jackson High School. He said he chose to focus on ROTC in college, instead of college athletics, but was able to get back to running through marathons with his ROTC detachment.

“The first marathon I did was out in New Mexico in the spring of 2019,” Buffington said. “It was called the Bataan Memorial Death March. It’s a full-length marathon, and its done in full uniform and boots with a 35 pound rucksack on.”

Buffington was able to run in the Boston Marathon this October. He was in the top three percent of finishers, running the race in two hours and 44 minutes.

“The number of runners were cut a lot because of COVID, so it was really competitive to get in,” Buffington said. “So just the fact that I was able to actually do the race is something I’m super thankful for.”

Buffington said he has grown a lot since he graduated high school, crediting ROTC for giving him opportunities to lead and build communication skills.

“ROTC is a great environment to try things and fail and learn from people that have done it before and are good role models,” Buffington said. “I’ve grown a lot in just the ability to work hard. Rolla is a really challenging academic institute, so it’s tested me and challenged me a ton.”