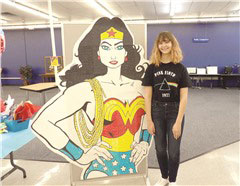 Sharpie markers were the medium Traci Rhodes of Jackson used for her larger-than-life-sized rendering of Wonder Woman, the DC Comics spokesperson for National Library Card Sign Up Month.

Since 1987, the month of September has been designated for the purpose of making a national effort to ensure every child signs up for his or her own library card. Both the American Library Association and libraries nationwide take part.

Rhodes, an eighth grade Jackson Junior High School student, said, “My mom posted some of my art on her Facebook page, so we heard about it (the invitation to volunteer and promote the event) from a friend who commented on the post.”

“The Wonder Woman was approximately 6 feet tall,” Rhodes said. While she did all the work by herself, she said her parents were very supportive.

“I sketched in pencil and filled it in with Sharpies. It took about one to two weeks, with some off days. I only used printer paper for the base,” she said.

“There is nothing more empowering than signing up for your own library card,” Eunice Schlichting, public services librarian at Riverside Regional Library in Jackson, said. “Through access to technology, media resources and educational programs, a library card gives students the tools to succeed in the classroom and provides people of all ages opportunities to pursue their dreams and passions.”

Rhodes thanks her teachers over the years, including Ms. Sample (elementary school), Mr. Kohm (sixth grade) and Mrs. Moore (seventh and eighth grade). “My past art teachers definitely helped me along the way to be here because I wouldn’t be as skilled,” she said.