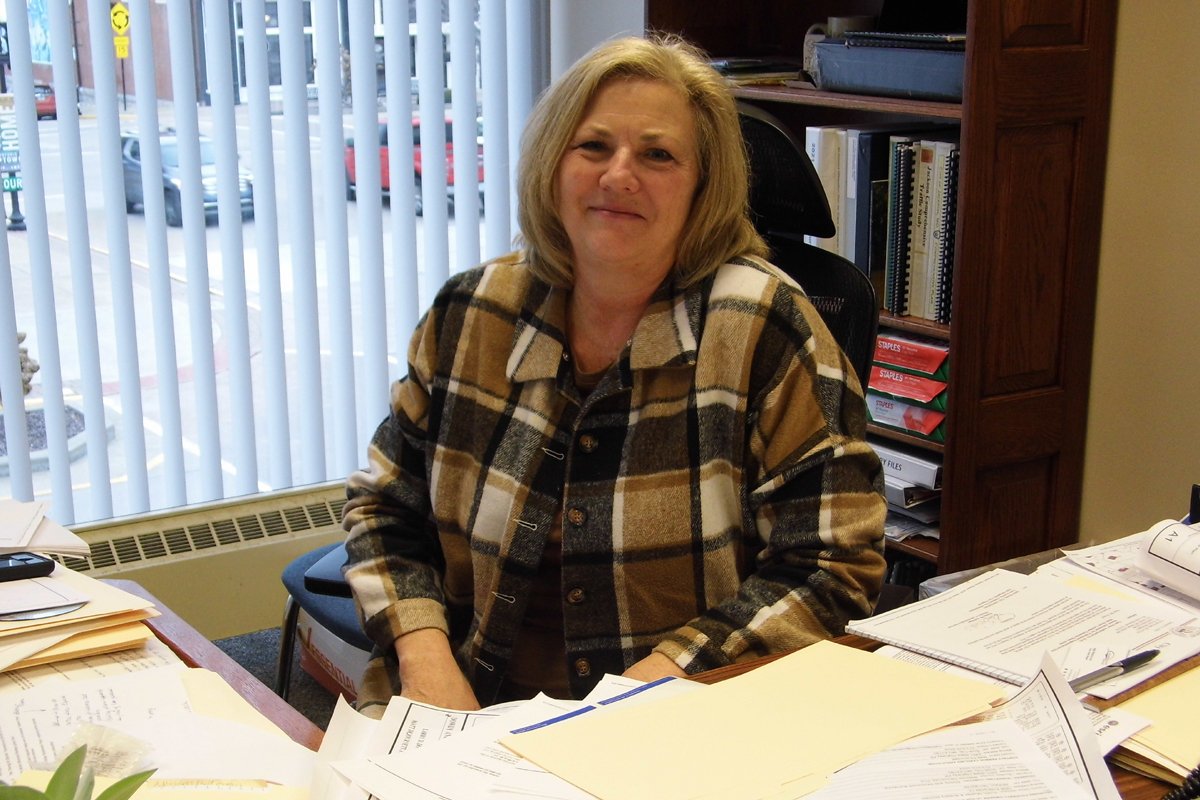 Janet Sanders, shown in her office at the Jackson City Hall, has worked for the city for more than 28 years. She will be taking on the role of public works director this week. Submitted photo

Janet Sanders, Jackson’s building and planning manager, has moved up the ladder over 28 years with the city and will soon take on a new position as Public Works Director as of January 25.

Honored that she was selected for this position upon Kent Peetz’ retirement, Sanders said, “I will be involved more directly with the water, wastewater and street departments in addition to building and planning.“

Sanders said the city has several major infrastructure projects currently underway, as well as other projects that will begin soon. She said all of them, at least partially, are the result of Jackson’s continue growth.

“We have great supervisors and employees who keep all the critical facilities operating on a daily basis,” Sanders said. “They are out in the rain and snow and often knee deep in mud and muck, troubleshooting minor and major problems so our citizens experience as little disruption as possible. I will be very proud to be able to become part of that team.”

Her first job with the city in 1995 was as a construction inspector, where being on site inspecting streets, sewers, and water mains the entire day was the norm – being a woman in that role was not.

“It came with some skepticism from the construction crews because not only was I new, but I was female, and at that time it was very rare to see a woman on a construction site,” Sanders said. “Within less than a year I began transitioning into building inspections because the boom in new subdivisions in the 90s was creating more building construction and we only had one building inspector.”

Sanders said there were many mentors along the way, including a couple of reputable contractors who taught her how to sweat copper plumbing pipes and correctly wire outlets and switches.

“I also had co-workers who were willing to train me in concrete testing and subgrade evaluation,” Sanders said. “Throughout my career with the city, there have been continual opportunities to learn new things as codes and technologies changed.”

As building and planning manager, Sander’s favorite part of her position has been building projects along with the team philosophy of her co-workers and working alongside citizens on an infinite variety of property issues. “I enjoy helping them navigate through the governmental red tape to a successful conclusion when that is at all possible,” she said.

Born and raised in Sikeston, one of Sanders’ fondest memories in high school was that of participating in the annual Jackson Band Festival along with other marching bands. In addition, Sanders said she has some “ancestral roots” in the area, with her grandfather growing up in Daisy. “His first job as a teen was in Jackson at McNeely’s Foundry,” she said.

After graduating from Sikeston High School in 1980, she began a degree in fashion merchandising and home economics at Southeast Missouri State University, which was placed on the back burner to marry Doug, her high school sweetheart. Being a homemaker, wife and mother was the plan.

Two daughters and a few years later, Sanders and her husband went their separate ways and Sanders went back to SEMO. Knowing she needed to become more marketable, she obtained a bachelor’s degree in industrial technology.

It was a big change from her original plan, but after college she began her career at Blair Industries – a Scott City packaging manufacturer where Sanders was the sole member of the AutoCad department.

Equipped with a bit of construction knowledge from personal projects and some technical knowledge from her education, Sanders applied for a job for the City of Jackson when the opportunity came up simply because it was closer to home.

“From the time I applied until I was hired, several months passed because the city was still in the process of creating an additional construction position,” Sanders said.

She remembers the single four-way stop light swinging over the intersection at Jackson Boulevard and Hope Street. “Since then, we have added thousands of houses, a few more schools, a larger variety of businesses, lighted intersections, roundabouts and uptown has become a vibrant destination again,” Sanders said.

Sanders put down roots in Jackson in 1991, just prior to her oldest daughter starting kindergarten. “The excellent Jackson school system and the clean and safe small-town atmosphere seemed the ideal place to raise children,” she said.

Janet and Doug Sanders spent several years apart but found their way back to each other, making family time with two grown daughters, son-in-laws and five delightful grandchildren a priority.

“If either of the girls’ families were to relocate, I think the rest of us would have to pack up and move too,” Sanders said. “Fortunately, that’s not their plan.”

Her favorite things about Jackson are the hometown feel, friendly people and rural surroundings. “When I go to visit downtown St. Louis or other large cities when you’re surrounded by nothing but buildings and concrete, I always breathe a big sigh of relief to be back among big expanses of trees and farmland and people who stop their car in a long line of traffic to let you turn in,” Sanders said

Jackson in Bloom is Sanders’ favorite event. “I find that I thoroughly enjoy playing in the dirt as much as I did when I was a little girl making mud pies,” she said.

Sanders was involved in starting the Uptown Jackson Revitalization Organization much loved springtime event. Sanders admits to spending hours at Jackson in Bloom, finding the benefits of gardening to be therapeutic. She feels the current chair, Cassi Holcomb of Cassi Bock Flower Gardens & Landscaping, has formed an ideal event for passionate gardeners and their families.

“To me, the events created by UJRO enhance the quality of life in Jackson, and I firmly believe that if you want your town to be a vibrant community, you should do your part to help make it that way,” she said.

Sanders, former mayor Barb Lohr and a small group of dedicated business owners and citizens willing to volunteer their time helped to get UJRO off the ground. A consistent board member since the beginning, Sanders will resign from that role but continue to volunteer and recruit her family to do the same.

“I have seen UJRO grow from a tiny seed to the robust organization it is today, led by our amazing director, Janna Clifton,” Sanders said.

Sanders said she has been able to prosper in Jackson through perseverance and contentment with what she has. “By staying in the same location with a relatively low cost of living and by sticking with the same employer for 28 years, I have moved slowly up the ladder of various positions and managed to build a secure retirement fund for the future,” she said.

Her hope for Jackson’s future is continued residential growth and to attract an even larger variety of commercial businesses – without losing the treasured hometown atmosphere.