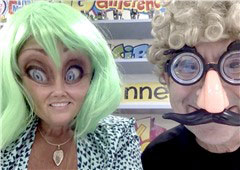 Educators know that being a bit of an entertainer can go a long way in keeping students focused and engaged in learning. So when St. Paul Lutheran School closed its doors due to coronavirus precautions mandated by Gov. Mike Parson, it meant the students would no longer have a “Bad Joke Friday” broadcast unless one was created by teachers.

Gilbert and Cossette began their series of YouTube videos on March 20, entertaining weekly for seven consecutive weeks, with the exception of Good Friday.

There was never a second take for the sibling pair of teachers, Orville Perr, Jr. and Karen Perr Cunningham. Maybe it was because — like teachers — they prepared for creating the video ahead of time. The two met at 5:30 a.m. on Fridays and talked about the script over a walk at Jackson Junior High School track.

“Bad Joke Friday” has been a portion of the student-led broadcast at St. Paul Lutheran School during in-school time for about five years.

Originally, they planned on doing just one episode but kept it up so the students would have a sense of normalcy. It doesn’t hurt that laughter is the best medicine either. As with most humor appealing to youth, many of the jokes used knock knock, yoohoo and ding dong to reel the listener in.

Perr Cunningham said that as a result, the parents gifted them with Yoo-hoo drinks and Ding Dongs.

The teachers continued with “Bad Joke Friday” because they loved doing it but mainly because they didn’t want to disappoint the students.

“I had a parent tell me that her son said he was so excited for the next day. When she asked why, he answered, because it’s “Bad Joke Friday.”

In the bad joke skits, Perr plays Gilbert, a character who gets things wrong a lot. His gigantic nose, curly blonde hair and smiling mustache are lovable. Cosette, with her bright green or pink hair, has a very memorable laugh and is constantly getting frustrated with Gilbert. She said, “I knew by doing knock knock jokes we needed to have a variation somehow. That’s when I came up with the idea of Gilbert wanting to do knock knock jokes but messing it up.”

From there, it went to Gilbert and his variation on knock knock jokes by saying, “ding dong.” Cosette didn’t approve, so she took over after telling him his job was well done. Perr said, “The “ding dong” one is my favorite. When I rewatched it, I realized how bizarre and weird it was.”

While the video is rolling, the Mac Photo Booth program causes the characters to get wide and narrow, with an alien-like appearance, adding to the weirdness.

The pair act much like a pair of comedians but a lot like brother and sister too. “When we were kids, we played; we fought,” they said.

Now the two are best friends and have been especially close since the loss of their dad when they were still in school.They were both born and raised in Jackson.

Accents they use in “Bad Joke Friday” are ones they cannot identify as specific, but they are flawless. Perr Cunningham said, “It’s just what I do.” When she reads books to her students she uses a New York accent or impersonates a dog speaking, whatever it takes to make it more interesting.

They both attended St. Paul Lutheran School as children.

“They (the teachers) took us places (with their accents),” said Perr-Cunningham. “You tried to mimic that.” Perr said, “I don’t just read monotone. The accents make it more interesting for the listeners. It’s rewarding. When the kids try and do it, they get the joy of reading.”

As Bad Joke Friday YouTubers, the fame is getting a little hard to handle, especially when they are out in public places such as McDonald’s and get recognized. Perhaps the Facebook post by Jenni Wachter, a St. Paul Lutheran School mom, jumpstarted their rise to fortune and fame.

Check out the zany pair of YouTubers at www.youtube.com/results?search_query=%23BadJokeFriday.