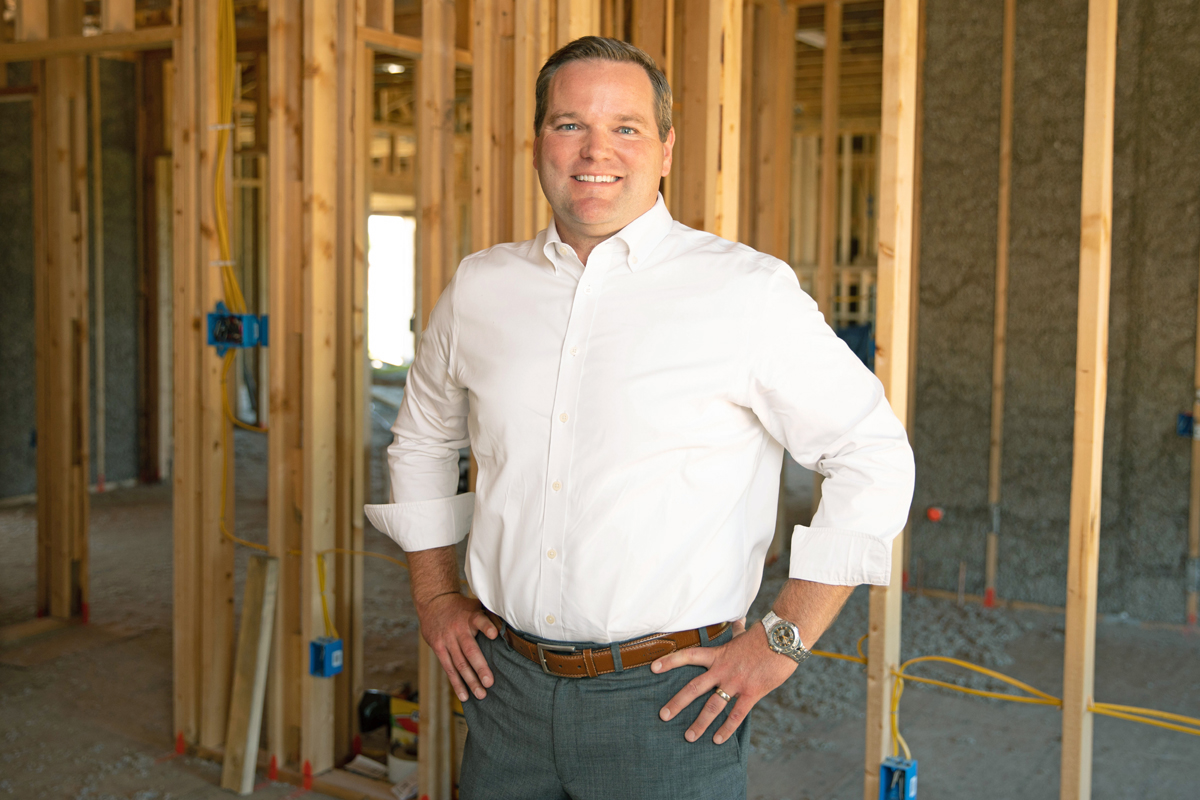 Wade “Pee Wee” Bartels is the president and CEO of the Jackson Alliance Bank. Submitted photo

After graduating from Southeast Missouri State in 2003, Wade “Pee Wee” Bartels left Jackson to begin his banking career up north in Farmington. However, it only took a few years for Bartels to return to his hometown.

Pee Wee at first had the “I can’t wait to get out of this town” mentality like many young people often do, but he realized something when he moved back to the area. “There’s really no place like [Jackson],” he said.

“I do think it’s a unique area and has so many unique qualities and values that are important to me,” Bartels continued. “Our leadership from school superintendents to the mayor and all the companies that we have around here are really good at respecting the history of Jackson. They’re also very forward thinking and try to progress our area, and I think they do a great job with that. That’s a unique combination.”

Bartels is helping the progression of the area in his own right as the current president and CEO of Alliance Bank, which opened the Jackson branch he works at in 2017. Alliance first opened in Southeast Missouri back in 1997 with the Cape branch and also now has banks in Sikeston (founded in 2001), Oran (2004) and New Madrid (2019).

As president and CEO of the Alliance Bank, Pee Wee is in charge of the strategic work for the bank, while managing the balance sheet and making decisions that impact the future of the bank. Bartels is also able to be a lender on an average day to work with customers personally.

“Being a lender to my personal customers is one of the most fun and rewarding aspects about the job, getting to interact with our customers daily,” Pee Wee said. “I don’t think a lot of CEOs get to do that — still maintain a loan portfolio and visit with customers, but I do it every day and love that part. The bank recently turned 25, and the decisions we’re making today will impact the next 25 years.”

“That’s what’s really exciting for me is to be able to play the chess game with the immediate and then also for future moves. Maybe the best part about being here is getting to lead a phenomenal staff. I get to work with some of the best people that you could imagine and I look forward to coming to work every day.”

Born in 1980, Bartels was what his mother would describe as a “pleasant surprise,” and he is the youngest of four children by eight years, which is how he got the nickname “Pee Wee.” His father actually gave him the nickname at the hospital and it’s stuck ever since. “I didn’t have any choice but to embrace it,” he laughed.

Pee Wee began his education at Immaculate Conception before going to Jackson starting in the eighth grade. Bartels decided to attend Jackson so he could play football, which he did throughout his high school years as he was also a member of the wrestling team.

In fact, Pee Wee’s high school wrestling coach Steve Wachter is still the head coach at Jackson today. Bartels attributes Coach Wachter to being one of the best mentors he had growing up. He also played football under Carl Gross.

“All of those guys have had a big impact on me over the years,” Pee Wee said. “Coach Wachter certainly had a very big impact. I mean, he instilled a lot of values in me such as accountability, mental toughness and the list goes on. I have a lot of gratitude for all of those guys.”

Bartels took these values to pursue a business degree at SEMO, and he, of course, had a big interest in banking. Pee Wee also earned his Masters in Business Administration from SEMO in 2008, and he later got his doctorate in education leadership from the University of Missouri (2014). Bartels also graduated from the graduate school of banking at Colorado in 2018.

In his first job at US Bank in Farmington, Pee Wee first worked as a credit analyst before becoming a commercial loan officer and the assistant vice president. During his time in St. Francois County is when Bartels and his wife Heather got married.

Pee Wee and Heather were high school sweethearts and decided to move back to the area in 2005, where Pee Wee continued serving as a lender at Commerce Bank in Cape. Bartels ended up becoming vice president of the bank and worked there until 2008, which was when he started working for the Jackson R-2 School District.

With Jackson, Pee Wee served as the district’s chief financial officer and associate superintendent for nearly a decade. Some of his duties included being responsible for the long and short-term financial planning and overseeing all of the district’s budget, while also serving as a safety coordinator in the District Safety Program.

“I absolutely loved [working at Jackson] — it was a great opportunity with a lot of great people,” Bartels said. “I was able to visit the schools whenever I wanted, so the interaction with the kids and staff was just a really good experience.”

Fast forward to today and Bartels is now getting to enjoy Jackson as the parent of two of the district’s students in his sons Nolan and Holden, who both play baseball and football. Pee Wee has even had the pleasure of coaching both of his sons on their respective travel teams.

As for his wife, Heather is a school nurse for Cape Central and has been for the past six years. Bartels not only describes her as a phenomenal mother and someone who keeps him out of trouble, but he said she has quite the impact on the community with her own profession.

“Not only being a nurse to those students in Cape but also being an adult that knows, loves and cares about them is so important,” Pee Wee said. “… She keeps me on the right track day-to-day, and I need a lot of guidance and structure.” He joked. “She is just overall a great person. She’s the type of person that would do anything for anybody and is always there when anybody needs her.”

Over the course of his life in Jackson, the growth he has noticed the most in his hometown has been at the high school. Not only has the campus grown with the addition of the J-Wing — the new freshman center — but also in enrollment as the school currently has more than 1,700 students.

Bartels believes this is because “the secret is out” about how great a community Jackson is, so therefore, he doesn’t see this growth slowing down. One of the reasons why he thinks this is because of the fact that the people’s values haven’t changed over the years he’s lived here. “Everybody’s willing to help whether it’s through a tornado, or whether it’s through charitable organizations or churches,” Bartels said. “There’s always somebody there that’s willing to help and go the extra mile, and I think that’s really important.”

Pee Wee has been involved in several organizations outside of his job at Alliance Bank, which include the Missouri Bankers Association, the Jackson Rotary Club, New McKendree United Methodist Church, Breaking Bonds, the Jackson Area Chamber of Commerce and the City of Jackson Board of Adjustments committee to name a few.

Bartels is hopeful his community can continue on the trajectory it’s on and knows how vital banks like his are to the town’s growth. Even though there are plenty of banks in the community outside of Alliance, he knows they’re good ones that also support the community.

“That’s a fun part of my job — I get to see the business aspect and the growth and the opportunities that are here and also be a part of that success of my customers as they’re investing and we’re investing with them into the community,” Pee Wee said. “That’s a huge blessing to be able to come to work and see that everyday. Not only is the bank providing for the community but for our customers as well.

“This is a phenomenal community. There are many across the country, but this place just seems special. Maybe it’s because I was born and raised here and just have a lot of love for the community, but to me it’s just special.”