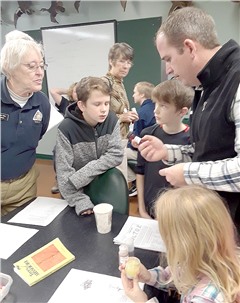 Be it achy muscles, rashes, cancer or rattlesnake bite, the early settlers made remedies from plants and everyday items found in most households to ease symptoms of every ailment.

On Saturday, Jan. 6, the Cape Girardeau County Nature Center held a program that taught the significance of many native Missouri plants and, in a hands-on workshop, participants made several remedies to promote better health.

Several teas, including memory tea, were available to enjoy during the class.

A plant and history geek, Koehler enthusiastically began with, “This is my favorite [subject] — not bugs or animals, but plants.

“We use plants for lots of different things. One of our best is breathing,” said Koehler.

In colonial days, “Doctors who went to school were few and far between. Some of them apprenticed, a vast majority learned from their dads and called themselves doctors. Midwives learned the value of medicinal plants and passed on the tradition,” said Koehler.

“If it (the medicine) tasted bad, it was good for you,” she said.

Koehler offered inexpensive options for the group to make infusions, tinctures, decoctions and distillations at home. These techniques “get the goodness out (of the plant),” she said.

For example, a glass bowl lining a pot can serve as a double boiler; a coffee grinder can grind roots and seeds that are particularly hard.

All supplies, which included plant and natural materials, were provided at the program. Koehler said she uses pant hangers to begin the process of drying her plant leaves in a closet. Other suggested methods included placing plants in the back of a car window or microwaving them.

Bryce Gentry, a 12-year-old Jackson Middle School student, attended the program with family members. After following calamine rose lotion and herbal liniment recipes which included comfrey root, St. John’s wort, peppermint leaves and rose petals harvested by Koehler, they placed the products in bottles and labeled them to share with others at the program.

Gentry said, “I learned how to make medicine.” Besides making it, learning about what it does was his favorite part.

Another Jackson Junior High School student, Levi Brotherton, volunteered at the program. He has always wanted to work at the Nature Center. The experience  “works great for my resume,” he said.

Other groups made Elderberries syrup Cockaigne and sunflower salve. They all shared the finished products, having a selection to bring home.

Devonne Glastetter of Jackson, who grows her own herbs at home to use as alternative medicine, attended the wild edibles program to gain more knowledge.

She said, “I like learning from other people and I read a lot. I harvest and forage during the seasons and experiment all winter long. I’ve learned a lot from Jamie too.”