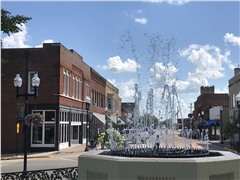 When we placed the new 2020 calendar on the wall or on our desktop last Jan. 1, we had no idea what was in store. No one around here had yet heard of COVID-19, or dreamed of the havoc it would wreak.

And yet, in spite of the worldwide pandemic that shut down and limited businesses for awhile, Jackson and this area has shown great resilience and amazing growth.

As Mayor Dwain Hahs reports in his column this week (see page 3), residents purchasing locally resulted in an 11 percent increase in retail business in 2020. So the news is not all bad.

This is how local events unfolded during 2020.

Beginning Jan. 1, residents of the City of Jackson could have special pickups of bulky trash at their home. They could sign up for one free annual pickup online or by calling Public Works. This pickup replaced the clean-up/fix-up weeks of previous years.

It seems as if the construction of the diverging diamond interchange at Center Junction has been going on forever. It hasn’t. It was on Wednesday, Jan. 8, that the Missouri Highways and Transportation Commission awarded the $17,476,608 contract to a local company, Penzel Construction.

Live, in-person events were still being held in the early months of 2020. The Chamber banquet on Friday, Jan. 10, sold out for the first time ever. The R.A. Fulenwider Award went to Tom Strickland.

While most residents were asleep that Friday night, an EF-2 tornado knocked out power to much of the city about 1:45 a.m. With winds in excess of 125 mph, the tornado snapped power poles near the substation close to Center Junction. The tornado severely damaged several businesses in the area, including Crader Tire and the Sides Construction Building on Birk Lane.

On Friday, Jan. 17, the Bank of Missouri donated $50,000 to the Humane Society of Southeast Missouri to help finance the building of a new facility. A ground-breaking for that facility happened later in the year.

Meanwhile, the City of Cape Girardeau had its own problems. A malicious cyber attack caused problems with the City’s e-mail and other digital systems that lasted for many weeks.

Sports is not the only way JHS students excelled. In the Feb. 5 issue of the CBJ, it was announced that six JHS vocal students were named to the All-State Choir. They were: Jeremy Brown, Maggie Carter, Patrick Malone, Hayley Rosborg, Lilia Rushing and Stone Vandeven.

At the Feb. 3 meeting of the Jackson Mayor and Board of Aldermen, it was reported that a new Shelter No. 5 was completed near the band shell in City Park. It replaced a shelter that had been damaged in the June 21, 2019, windstorm. The replacement shelter was funded through insurance payments and a generous donation from the Optimist Club.

Construction of the diverging diamond interchange began Tuesday, Feb. 11, with lane restrictions on I-55.

During the Feb. 11 meeting of the Jackson Board of Education, the $6.1 million junior high construction project budget was approved. The project includes expanding the cafeteria and adding a new library and band room. The School Board had rejected the first round of bids in December 2019 because the bids were all too high.

The American Legion held an open house Sunday, Feb. 16, to show off its renovated building. The building had been damaged the previous summer in a windstorm.

On Wednesday, Feb 19, SoutheastHEALTH held a beam-signing ceremony at its new behavioral hospital at 639 S. Silver Springs Rd., Cape Girardeau. The hospital was originally scheduled to be opened by the end of 2020.

As February was coming to a close, on Friday night, Feb. 28, the Saxony girls basketball team won its eighth-straight district championship by defeating No. 2 seed West County 64-52. Saxony was the No. 1 seed.

At the March 2 meeting of the Jackson Mayor and Board of Aldermen, John Mehner, president of MAGNET, announced that a national company (later revealed to be K-CoeIsom) had an interest in building a new facility in Jackson. To help persuade the company to build here, the Board agreed to issue Chapter 100 revenue bonds and to give a partial property tax abatement for 10 years.

In the March 4 issue of The Cash-Book Journal, a new word entered our vocabulary: coronavirus.

U.S. Rep. Jason Smith wrote a column titled, “A time for clarity about coronavirus.” At that time, he reported, “Currently, there are more than 83,000 confirmed cases in over 50 countries, including Japan, North Korea, Iran, Italy, France, Britain, Canada, and the United States.”

He added, “Despite China’s attempt to conceal the truth and the Left attacking him for being un-American, President Trump did not hesitate to take strong action. He closed our borders to all non-Americans who had recently traveled to China and put a quarantine into effect on Americans infected with the virus. These actions were critical to slowing the virus from spreading within the United States, and, more importantly, it provided us with a crucial advantage: time.”

Missouri did not yet have a case of coronavirus. The first “presumptive positive” case in Missouri was announced by Gov. Mike Parson at a press conference on Saturday, March 7. It was a female in her 20s who had recently traveled to Italy.

Who knew then what tidal wave of trouble loomed over the horizon?

(Continued next week!)
In this article: