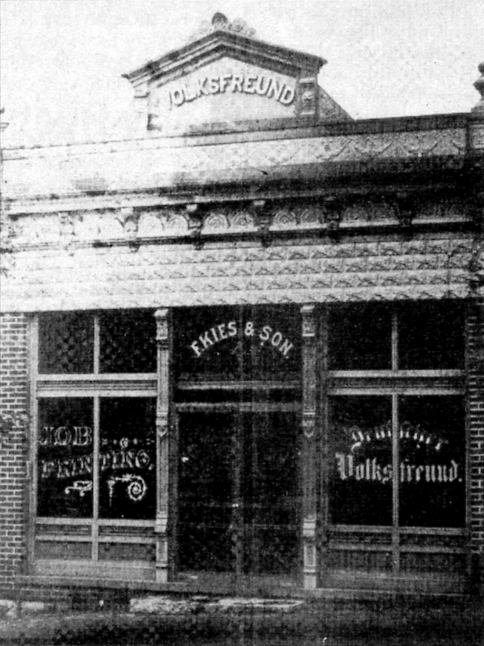 Frederick Kies owned the The Volkesfreud newspaper on Adams Street. This was the forerunner of the Cape County Post. File Photo

Rev. Frederick Kies established a newspaper in Jackson called the Deutscher Volksfreund, meaning “A friend of the Folks” on March 11, 1886. This new venture began back in Ohio where he had been a principal of a school in Zoar.

At the time, he came upon a Washington hand press and type at a reasonable price. He then published a religious monthly in the German language in Ohio, followed by a move back to Cape Girardeau County from where his family originated.

It was with the prompting of his friends here in Jackson that he decided to publish a weekly in the German language. Since many of the local population hailed directly from Germany, many still spoke the language and barely wrote or read English. Their education in English was slight which resulted many times for documents being signed with an “X.”

Kies began by purchasing the defunct printing outfit of the “Cape Girardeau An-zeiger,” and set up in the se-cond story of the Emanuel Milde’s frame building on High St., the former location of the blacksmith and wagon shop of Fred Hatch. With his modest equipment and mismatched type, Kies published his Deutscher Volksfreund, a six column folio in 1886.

He decided subscriptions would not be taken until the townspeople would have a chance to read the first edition. That first evening he knew it would be a success as Leo Tobler came running up the steps enthusiastically with a $1.25 from his mother, Mrs. Augusta Tobler, saying she wanted to be his first subscriber.

The paper’s motto was, “The Welfare of the Whole Contains Within Itself the Welfare of the Individual.” It would be a vehicle of information of local and national happenings with truth and justice.

The first edition was two pages with advertisements from Otto Buehrmann taking up two columns on the first page with prices of his new goods. Others were from Williams & Son, Wessell & Kneibert, C.H. Macke, Mc-Combs Hotel, Charles Welling and Orient Roller Mills.

Growing in success, the second year of the paper was published by a new job press and type.

In the summer of 1888, Rev. Kies was invited to move to Kansas and accepted a job in education and religious work. Son Fred Kies, who was the mechanical man on the paper, took over the publishing duties and continued the business, assisted by William Schwartz.

Returning from Kansas at Christmas, 1889, Fred Kies Sr. came back to the paper awhile before being elected Cape Girardeau County Treasurer in 1890 for two terms.

Expanding, the Volks-freund appeared as an 8-column folio in May, 1891, with a subscription price of $1.50.

On January 1, 1894, Fred E. Kies Jr. was added as a member of the firm, although he had always been involved from the beginning.

Because the present floor of the building was not sturdy enough to allow the newer, heavier equipment, the decision was made to move in 1896 and build their permanent place on 107 East Adams Street. Today it is the home of The Ground-A-Bout.

In February, 1897, the first cylinder press, the new Improved Prouty was purchased in Jackson. The new No. 1, Vol. 13, appeared on March 11, including 8 pages of six columns each. Jack Hopkins hand cranked many editions until a gasoline engine was installed which turned out 600-700 copies an hour, instead of 150 hand-cranked.

The March 27, 1892 edition announced that Fred Kies Sr. sold his interest to his sons, Fred E. and J.G. Kies. In 1910, J.G. went to a Brooklyn, N.Y. factory to learn the mechanism of the linotype press. At that time two other newspapers ordered the linotype, the Dunklin Democrat and the Bloomfield Vindicator.

Apprenticeships were popular at the paper, the first being Herman Ade. He aspired to operate the future linotype, but died in 1911 of tuberculosis. The second was Herman’s brother, T.W. followed by Reuben Schade who started as a school boy. He left, attended two years of college and returned. His brother, Leo, also an apprentice, became an expert lino-type operator.

William Schwartz and family moved to Jackson, remained with the Cape County Post until 1930. He became the owner of the Mississippi Valley Printing Co.

With the coming of World War I with Germany, all changed for the Volksfreund. On July 14, 1918, the name was changed to the Cape County Post; however the paper continued to print five pages in English and three pages in German for a year. On Friday, August 29, 1919, a mob gathered outside the Post with the intention of destroying all the German type. Kies decided to agree to relinquishing the German segment to prevent destruction of his property and bloodshed.

The incident unfortunately took place during Homecomers when a reception had been given for the veterans.

It was considered after the unfortunate incident, to move the Post to Cape; however the decision was reversed and the paper remained on Adams St. Calm and harmony prevailed thereafter.

After 76 years, the Deutscher Volksfreund and Cape County Post stopped publication under that name. In April, 1962, it was purchased from Leo Schade by John Hoffman. He merged the paper with the Missouri Cash-Book from Marvin Proffer and created The Jackson Pioneer Newspaper which published until 1965.