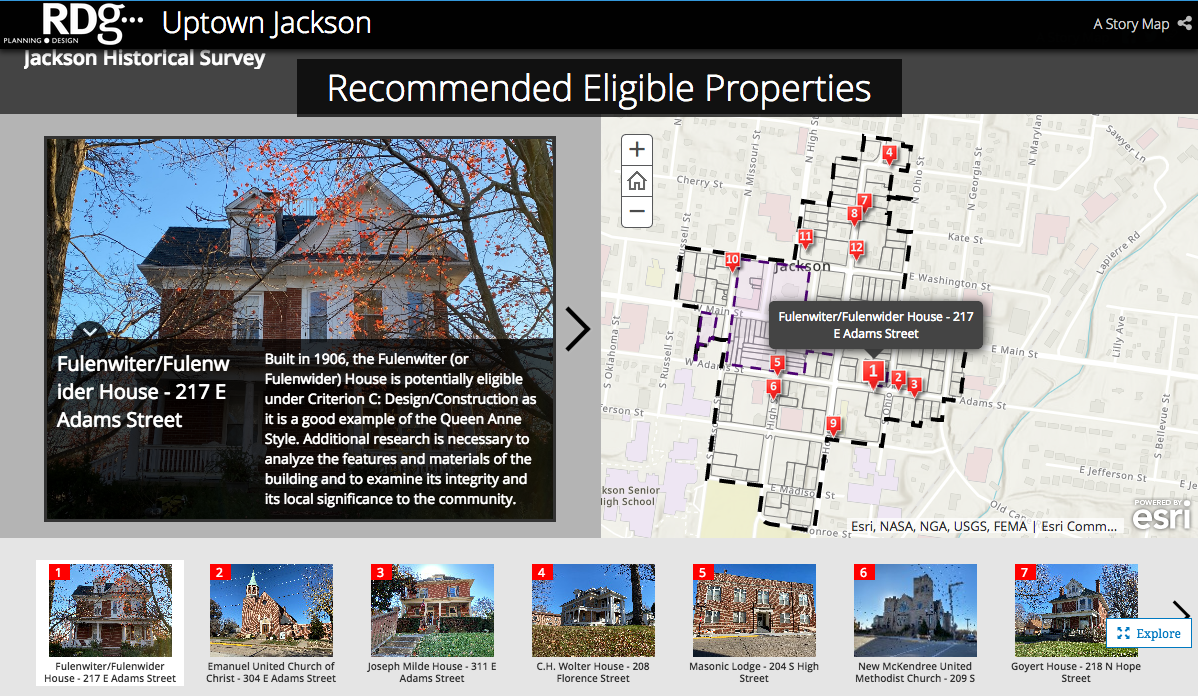 A story map of the report will be added to the City of Jackson website this summer. Submitted graphic

A historical architecture survey of Uptown Jackson has found 12 local properties that may qualify to be included on the National Register of Historic Places. The completed survey report was presented in an open house on June 17 and will be made available on the City’s website this summer.

The reconnaissance survey, completed by RDG Planning and Design, included 126 buildings and properties within the early boundaries of Jackson, with each property surveyed and researched for historical significance.

RDG historical architect Michelle Cunliffe said the survey recommendations do not guarantee that the 12 properties will be eligible for the national register, but that further research would be needed.

“It’s a high level survey of what is in the area to help the City plan for next steps,” Cunliffe said. “It’s a good planning tool to understand what’s there and what should be saved. It also helps building owners recognize if they have a special piece of architecture and what they can do about it.”

The Historic Preservation Commission will assist property owners who would like to move forward in the national register process. Some properties listed on the National Register of Historic Places are eligible for federal and state historic tax credits that apply to rehabilitation projects.

The survey report will also be used by the city’s Historic Preservation Commission to develop a list of historically significant properties. According to Jackson Building and Planning Manager Janet Sanders, this list will help the City maintain its Certified Local Government status with the State of Missouri.

The City of Jackson currently has two individual properties on the national register (the Oliver House and the Frizel/Welling House). In addition, an Uptown Jackson Commercial Historic District consisting of 30 buildings was added to the National Register of Historic Places in 2005.

The survey did look into possible expansions to the uptown commercial district, as well as a new historic district, but none were deemed eligible for inclusion. Cunliffe said if there was a strong desire to expand the district for the national registry, some historical building restorations would be needed.

Most of the recommendations in the survey were due to the building’s unique and historical designs. “Jackson has a lot of variety of different styles, which is great,” Cunliffe said. “Because the city was settled so early, you see a wider variety of styles compared to what you would see farther west or north.”

The report will be presented to the Jackson Board of Aldermen and is still waiting on final approval from the State Historic Preservation Office before the full report will be shared.

“There’s a lot of history information in there that I found really interesting and I learned a lot,” Sanders said of the report and inventory forms. “We are looking forward to getting it out there where people can see it and learn about different buildings in town.”

The $25,000 project was partially funded through a $15,000 grant from the National Park Service and managed by Missouri Department of Natural Resources’ State Historic Preservation Office.

The recommended buildings include:

• Fulenwiter (or Fulenwider) House at 217 E. Adams Street: The house was built in 1906 and is potentially eligible for the national register as a “good design example of the Queen Anne Style.”

• Emanual United Church of Christ at 304 E. Adams Street: Built in 1928, the church is potentially eligible as an “excellent example of the revival styles of architecture that were used during the time of construction for religious facilities.”

• Joseph Milde House at 311 E Adams Street: Joseph Milde and his uncle Dan Milde built the house in 1910. The house is potentially eligible as “an intact example of Italianate architecture.”

• C.H. Wolter House at 208 Florence Street: The 1910 house is potentially eligible as it “embodies distinctive characteristics of the Neoclassic Style.” The home features unique yellow bricks, multiple porches, stained glass and other details that remained intact. The early owner of the house, C.H. Wolter, owned the C.H. Wolter Buggy and Harness Shop on the corner of Main and Missouri Streets.

• Masonic Lodge at 204 S. High Street: The masonic lodge has been at this location since at least 1895, but the current building was reconstructed following severe tornado damage in 1923. The masonic lodge is potentially eligible for its social history.

• New McKendree United Methodist Church at 209 S. High Street: The church was built in 1910, seeing an addition of the education building in 1959. The church is potentially eligible as an “excellent example” of the revival/late Gothic architectural style.

• Goyert House at 218 N. Hope Street: The house was built by Fred and Ellen Goyert in 1910 and is potentially eligible as it “embodies distinctive characteristics of the Queen Anne Style.” Other owners of the home include John G. Heinberg and John R. and Margaret Boss Short.

• Brooks House at 219 N. Hope Street: The home was built by Major James Francis Brooks in 1877 and the Phillip Heyde family lived in the home by 1900. The house is potentially eligible for the national register due to it embodying “distinctive characteristics of the Italianate style,” but may also hold local significance for its ties to early development of Jackson.

• Immaculate Conception Church at 208 S. Hope Street: The current church was constructed in 1962. More research is needed to determine if any major alterations have occurred since its construction, but may be eligible at the national or local level for “its representation of the Moderne style of architecture.”

• Criddle-Sander (Stone) House at 119 N. Missouri Street: The first two-story house in Jackson, also known as the Rock House, was originally owned by Charles Criddle. The stones used came from Hubble Creek and were quarried by the slaves who built the house in 1815. The I-House style home is potentially eligible as a “rare surviving example of this type of architecture,” as well as locally significant in the early settlement of Jackson.

• Henry Gockel House at 104 E. Washington Street: The 1908 brink home was originally owned by Henry C. Gockel, who also owned the only livery stable in the city next door to the house. Gockel was also one of the organizers of the People’s National Bank. The home was also used as a clinic for Dr. Walter Hutton, who lived upstairs. The house is potentially eligible “as it embodies distinctive characteristics of the Queen Anne Style and maintains a great deal of historic integrity.”

• First Presbyterian Church at 206 E. Washington Street: The First Presbyterian Church was constructed just before World War II in 1940 on the site of the former Episcopal Church that was destroyed by a tornado. The church is potentially eligible “as an excellent example of the revival styles of architecture that were used during the time of construction for religious facilities.”