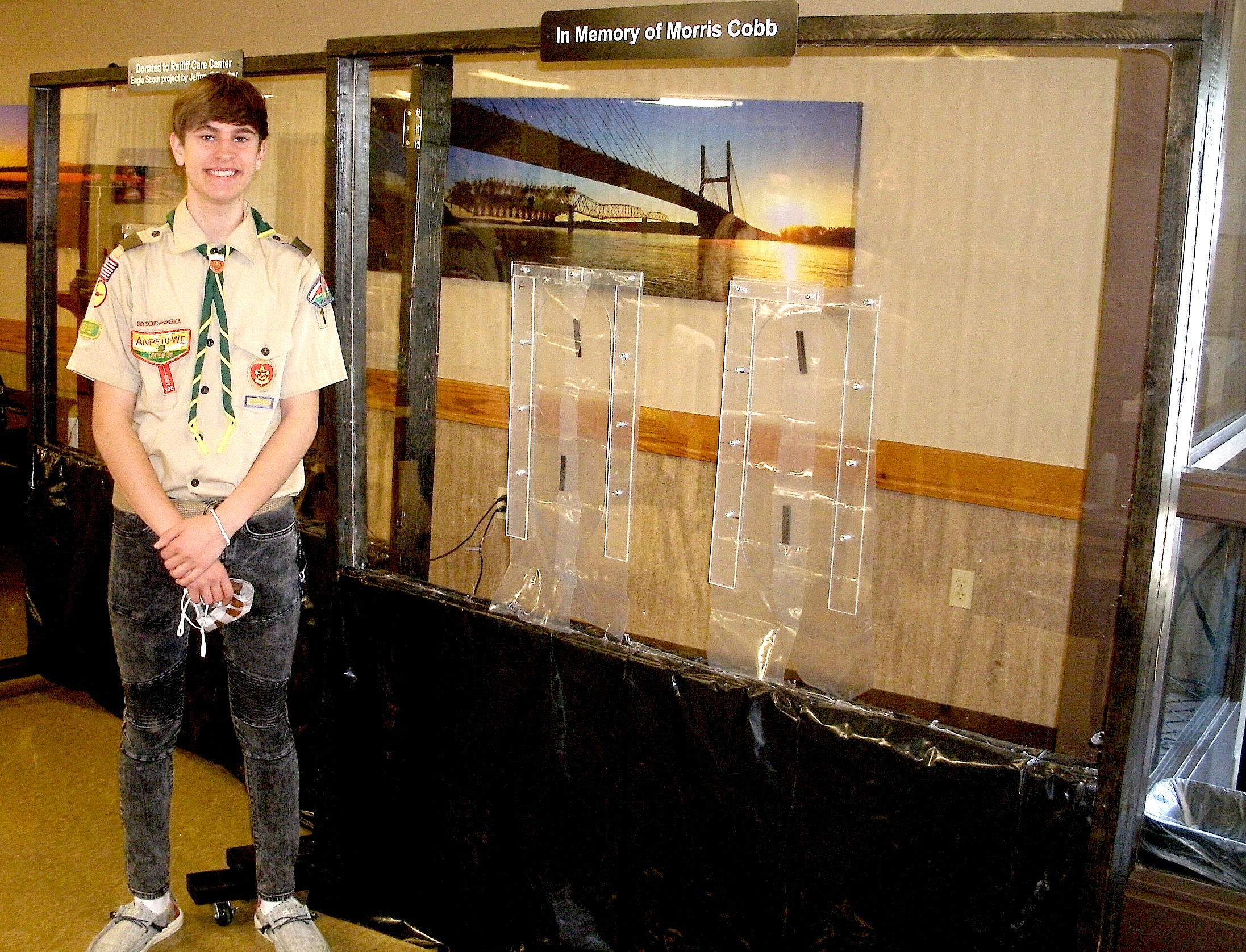 Jeffrey Erlbacher poses with his hugging booth. Constructed of wood and plexiglass, the booth is on casters, making it moveable. Photo by Gregory Dullum

Hugging is more than just a way to greet people who are especially close to you. It has power to affect our daily health.

According to “The Power of Hugs and How They Affect Our Daily Health” published on the SCL Health’s Web site, hugs help lower stress, give our immune system a boost, may lower heart rates and blood pressure, and could lead to decreased depression.

During this COVID-19 pandemic, as social distancing became the norm, hugs were no longer permitted, especially in nursing homes.

Jackson High School Junior Jeffrey Erlbacher decided to do something about that. For his Eagle Scout project, he decided to make a hugging booth and donate it to Ratliff Care Center, 717 N. Sprigg St., Cape Girardeau. With the help of his father and mother, Jimmy and Melanie Erlbacher, he delivered the two panels and completed the final assembly in the nursing home lobby on April 15.

The booth consists of two hinged wooden panels on wheels with large plexiglass windows that have two oval-shaped holes cut in them. Visitors standing on one side of the plexiglass can put their arms through the holes and hug residents on the other side with very little risk of spreading the virus.

Early this year, while Ratliff Care Center was in “major lockdown” because of COVID-19, Jeffrey approached Administrator Mike Ratliff with the idea of building and donating a hugging booth.

Jeffrey said he came up with the idea after his maternal grandfather, Morris Cobb, was in the Lutheran Home “and we couldn’t talk to him at all. Well, we could, but over the phone.”

“On Christmas Day, we all went there in 20-degree weather, and he was in his room, and we were standing outside of the nursing home. There was no physical touch,” added Melanie.

“My dad — his grandfather — was in his nursing home in like 100 percent isolation for 23 days because he was in the COVID unit,” continued Melanie. The only contact Cobb had with people was when staff “put on all that garb” and brought him meals or when he received “a tiny bit of therapy,” she added. Cobb was a former Southern Baptist preacher who “liked to go visit people and being in isolation almost killed him,” she said.

Cobb didn’t die from CO-VID-19. He had congestive heart failure and his heart gave out. “We were able to bring him home Jan. 11. I took a leave of absence and helped my mom take care of him. We had a really good month with him.”

Signs atop the hugging booth proclaim that the booth is “Donated to Ratliff Care Center. Eagle Scout Project by Jeffrey Erlbacher. In Memory of Morris Cobb.”

Rather than make a bench or put a light on a flagpole, Jeffrey decided to make a hugging booth. His mother said, “When I saw this, it meant so much more. I told my dad after we got him home, “You inspired Jeffrey for his Eagle Project.”

Billye Elledge, infection control preventionist at Ratliff, said she was aware that hugging booths had been in use overseas. “We were looking for different ways to accommodate family visits. All the residents were on lockdown for so long that they were emotionally suffering from not having contact. This is a very family-oriented place. A lot of our residents were used to having their families in daily.”

During the height of the pandemic, outdoor visits were permitted, but that was not a good option because of the cold temperatures.

Rules regarding visitors are currently not as restrictive as they were in January because the positivity rate has now dropped. But Elledge is thankful for the hugging booth. “We don’t know what tomorrow holds.”

Several area businesses chipped in to make the project affordable. R.P. Lumber provided the wood at cost, which was about $60. Three individuals donated $20 each, covering that cost. Columbia Construction donated $400 worth of plexiglass. Ken’s Ace Hardware provided a $100 gift card that paid for the hardware—hinges, wheels, nuts and bolts.

Boy Scouts from Jeffrey’s Troop 11 helped sand, stain and assemble the booth. Melanie’s cousin’s husband has a workshop where the work was done.

“I think it’s great,” said Mike Ratliff, administrator of Ratliff Care Center. “You go back a year and what transpired over the year, it was really tough for the residents, for staff, and for families. We have a small facility, so it’s difficult to have a dedicated area for having indoor visits. So having this [be] portable is very innovative; we can roll it around and use it for visits or use it as a hugging booth.”

Ratliff also was impressed to see “a young person that thought of giving back to this older population. Doesn’t that inspire hope for tomorrow?” he asked. “It’s great to have this. People sell these. But for this young man to take his time and talent, to give back. It gives hope. You need that today.”