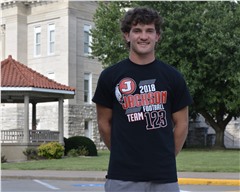 Even though Jackson dual-sport athlete and 2020 graduate Seth Waters was unable to play his senior season of golf due to the coronavirus pandemic canceling spring sports, he still went out with a bang on the course and also on the gridiron.

Hundreds of thousands of athletes have never experienced what it is like to play for a state championship, but Waters did so twice in his final two seasons as an Indian.

The first was back in the 2019 spring season — his final year of high school golf — as he helped Jackson’s boys team win their first state title in school history.

The second and final state championship Waters played for was this fall as a member of the Indians football team, which was the first time the program had played in the state title game in 24 years.

“I’m thankful for all the memories and people I met,” Waters said. “It couldn’t have ended better obviously unless we would’ve won it in football, but still it was an awesome experience to go up there and play with your teammates in a huge game like that.

“Winning state in golf — I’ll probably never experience anything that cool again, but I’m excited for the future and playing golf in college.”

Waters officially signed with Mineral Area College to continue his golf career at the next level back in January two months after his final season of football. His football career ended with a 27-21 overtime loss to Carthage for the Class 5 state title.

“I can’t even describe [what it was like playing in that game],” Waters said. “I looked up in the stands, and I was speechless. It was chills, goosebumps — whatever you want to call it.”

Jackson was 13-0 heading into that contest and had defeated teams by 29 or more points up until facing Eureka in the state quarterfinals. The Indians were victorious at 29-14 and then traveled to Kansas City to face Staley in the semifinals, where they won 20-7 to advance to Columbia.

Waters sealed the victory by breaking off a 33-yard touchdown run with two minutes left in regulation.

“That was a crazy, crazy game, and the fans were just awesome,” Waters said. “It was really fun and it was a true testament to us not giving up by going ahead and finishing it out.”

Following the season, Waters was one of the football team’s eight players named Class 5 All-State as he secured second team honors at running back.

“I thought [being named all-state] was really neat honestly,” Waters said. “I really didn’t expect that at all, and I thought it was a cherry on top of the season.”

On top of finishing as the Class 5 state runner-ups, the Indians finished the regular season undefeated back-to-back and won consecutive SEMO Conference and Class 5 District 1 Championships.

Waters began the football season as Jackson’s lone returning starter at slot receiver after hauling in 26 passes for 606 yards and seven touchdowns his junior year. Returning as the team’s starter at running back was junior Daniel Dickerson, who was coming off his own all-state campaign, where he recorded 1,583 all-purpose yards and scored 23 touchdowns as a sophomore.

In week two at Parkway North, Dickerson and backup running back junior Dimechi Herring both suffered torn ACLs. This forced Waters to take over the lead running back job, and he did so quite well while even picking up the nickname “Mighty Mouse.”

However, Waters was no stranger to the position since he had played running back off and on throughout his football career.

“It was a really easy transition, but the first couple weeks were a little tricky,” Waters said. “You would think the run plays would be easy, but it was fun. [Parkway North] was definitely nerve-racking because I would’ve never dreamed of playing running back in that game. Coach [Brent] Eckley took it easy on me and even threw me out there at the receiver spot at running back, so it was all right.”

Through 14 games, Waters racked up 1,640 yards from scrimmage and found the endzone 18 times on a total of 231 touches for an average of 7.1 yards per touch. Waters eclipsed 100 yards rushing five times this fall including a career-high 214 along with two rushing touchdowns in his team’s 35-0 shutout of crosstown rival Cape Central at The Pit.

“I have to give my o-line a lot of credit because those guys make holes that anyone could run through,” Waters said. “They made it very easy on me, and I think a lot of past experience at the position helped, too.”

Playing at The Pit is something Waters will never forget, and he and the rest of the 2020 class were even able to graduate at the stadium instead of at the Show Me Center like previous classes.

“Jackson Indian football definitely has a different ring to it — I don’t think there’s anything like it,” Waters said. “We always talk about brotherhood, and I think that is the biggest part about Jackson football. The bonds you make are unreal. You get so close to those guys, and you go through so much during the summer and offseason that you want to play your hardest during the season because you’re playing for every single one of your teammates and not just yourself.”

In what was his final full season of high school golf, Waters and the Indians did not lose once. Jackson won each regular season matchup while also coming away with consecutive SEMO Conference, Class 4 District 1 and Class 4 Sectional 1 titles.

Waters placed 36th overall at the Class 4 State Tournament as the Indians won the title with a combined score of 611. His first-round score of 78 helped Jackson finish in second place after day one.

Other golfers on last year’s state championship team included Case Englehart and Tanner Walton, who are both playing collegiately at Arkansas – Fort Smith and John A. Logan Community College, respectively.

“That whole year I had played the five spot, so I kind of just tried to post a good score in case one of the super talented guys had a rough day,” Waters said. “I always kind of took that to heart to always play solid and don’t do anything I wasn’t capable of doing. Just try to be that solid guy that posts something not too crazy but solid.

“When my score is getting counted, you know it’s not always the best. It’s all right, though, it was only a one-shot difference between Tanner and I that first day at state.”

Any young fan who understood which Jackson Indian was being called Mighty Mouse or simply witnessed No. 22 with the ball admired the effort and skill Waters played with. His advice to them would be, “Just work as hard as you possibly can because once it’s over, it’s over. You can’t go back and change how hard you worked.”