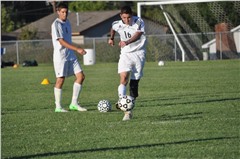 Almost four years ago, Dean and Rachelle Weber lost their 18-year-old son, Nolan, to brain cancer after a near three-year battle with the disease.

Nolan was diagnosed with cancer at 15, but Dean said he nearly doubled the life expectancy doctors had set for him.

“That’s just the type of kid [Nolan] was,” Dean said. “He did everything big throughout his whole, young life. So, when we do things for our foundation, we try and capture his strength and spirit, we try to do everything big.”

The couple, which started Believing Beyond — The Nolan Weber Foundation, keeps Nolan’s memory alive while also raising money for other families in need by hosting the Annual Nolan Weber Believers 5K.

“The 5K actually came about as a fundraising activity for [Believing Beyond], which is actually a name [Dean] came up with,” Rachelle said. “We started the foundation in honor of Nolan, who passed in December 2013. We kind of wanted to tap into things he was passionate about or liked to do.”

Nolan was a two-sport athlete at Jackson High School where he lettered in both baseball and soccer. The 5K is actually hosted in the parking lot of Jackson’s soccer field.

“Not that running was something [Nolan] liked to do, but it kind of fit a little bit,” Rachelle laughed. “One of the things he did is he did a lot of running to prepare for soccer. The course that we actually run is one that he would run ahead of the season to get himself in shape.”

Rachelle and her husband started off with “no real experience” in running an event such as a 5K. In the first year of the Nolan Weber 5K, over 300 people participated.

“Our goal is to keep it going, and continue to may be either add activities or add people to it every year,” Rachelle said.

Dean said it requires an extensive amount of work to run such an event as well as raise awareness for it. He explained numerous people help with the event the day of such as student-athletes from Jackson and Southeast Missouri State University.

“We are really touched when we see the high school and collegiate aged kids there,” Dean said. “We would love to find a way to attract even more of them to the event itself. It’s a constant work in progress, and last year we added a couple new events.”

The events added were the one-mile course and the color dash for ages 12 and under.

The reason why the Webers host the 5K in September is because it is Childhood Cancer Awareness Month.

Dean explained since he and Rachelle have gone through this traumatic experience, they already know how many different ways cancer can attack a family.

“Cancer attacks on every front, and it never stops,” Dean said. “It’s entire goal is to not only take life away, but to completely tear apart a family.”

All of the proceeds raised from the event are provided to families in need of financial support who have children facing catastrophic illnesses.

When Rachelle and Dean have a family with a need, the first thing they do is meet with them to find out what type of support they need whether it be financial, emotional or spiritual.

Rachelle continued by saying they have been able to help local families in Cape Girardeau and Jackson students who have been diagnosed with cancer by raising enough money to provide them with scholarships for college.

“Some of them can’t pay their house payment that month or they need help with something in their household,” Rachelle said. “They’re driving back and forth to Children’s every other day, and people don’t realize when you do that not only are you driving up there, you are having to park and eat there — it’s relentless and it’s never ending.”

People interested in joining can register online at https://www.runreg.com/4th-annual-nolan-weber-believers-5 or visit the organization’s website for more information on how to participate or donate to the cause here: www.believingbeyond.org