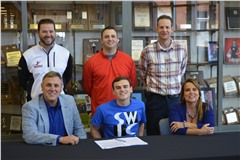 Jackson senior second baseman Justice Crosnoe returns as the baseball team’s lone Class 5 All-State selection from 2017. He is also the only player on the team to have signed a National Letter of Intent.

Crosnoe did so on March 2 as he signed with Southwestern Illinois College, which is a community college located in Belleville, Illinois.

“It’s a great two-year college,” Crosnoe said. “The baseball team is looking good, and I definitely like the coach. He’s a great guy, and I think I have lots of potential playing there.”

Crosnoe hopes his two years of playing at the junior college level will get him noticed by a four-year school.

He was noticed by SWIC after a camp he attended there, and soon after he was contacted by the staff.

In Crosnoe’s junior season, he recorded a team-high batting average (.415) as well as most runs batted in at 36 (program record) and a team-high 27 stolen bases.

Crosnoe also tied for the team-high in hits with 39 and only recorded four errors defensively.

“I told myself that I am going to have to practice everyday if I was going to get good at this,” Crosnoe said. “I practice everyday, and it’s showing. Our baseball team is overall better, and we had the most wins in history.”

Heading into 2017, Jackson had won two-straight district championships, but the Indians came short of winning a third last year.

“We’re definitely pushing each other to be better [this year],” Crosnoe said. “We have a good squad even though we did lose a lot of our players from last year. We three seniors have to be leaders and show the other players how to play the game.”

Jackson head coach Bryan Austin said Crosnoe is one of the best players he has coached in his five years at Jackson.

“The best part is he’s just such a hard worker,” Austin said. “That’s what the key is to him. He works extremely hard in the offseason.”