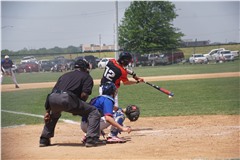 For a fourth year in a row, the Jackson baseball team (20-8) has reached the Class 5 District 1 Championship game under head coach Bryan Austin.

This mindset is the reason why senior Cole Welker (5-1) received the start on the mound in favor of junior Tyler Martin (7-0) because Coach Austin wants his ace starting in the title game.

“We knew [Welker] had to keep the ball down and locate three pitches,” Coach Austin said. “He located all three pitches all day long. Our goal was to get him through five innings and close Tyler Martin, and it ended up working how we needed it to.”

Welker pitched five of the seven innings, where he allowed all four runs off five hits and two walks while striking out three batters.

Martin came in for relief in the sixth inning after Welker allowed a two-run homer with two outs to make it a one-score game a 5-4 in the bottom of the fifth inning.

Martin only had to throw 22 pitches to get the final six outs, where he was also able to record his 49th K of the season.

“We had a plan where we were going to rule [Martin] out for 40 [pitches],” Coach Austin said. “If we kept him at 40 it would help with his recovery, so this was even better.”

To start the game, Welker was able to force Hillsboro’s first three batters into outs to allow the Indians to take the lead in the bottom of the first.

Senior Justice Crosnoe, who finished the game with a game-high three runs, started things off for Jackson with a triple into right field.

Junior Landon Hahn was walked after Crosnoe’s at bat to bring junior Tyler Harris to the plate, who is the team’s leader in RBIs with 31.

Instead of having Harris try to send the ball to the outfield, Coach Austin decided to have him bunt with Crosnoe at third base for the squeeze play.

Harris’ bunt was successful as Hillsboro’s pitcher failed to come up with the ball, but Crosnoe remained at third base for the bases to be loaded.

“Harris has been highly successful at [bringing runners home off bunts],” Coach Austin said. “That was the thought, but it didn’t turn out how we wanted it to. But it actually turned into a good situation that could’ve been terrible.”

With the bases loaded and only one out, junior Seth Essner was at the plate hoping to drive in the Indians first run of the game.

Essner did so as he hit a two-run single off a fly ball to left field for Crosnoe and Hahn to cross home plate for Jackson to take a 2-0 lead over the Hawks.

“[Essner] is a kid who got injured, had surgery on a Monday and plays on a Friday, so you’re talking about a very tough kid right there,” Coach Austin said. “He did a fantastic job [in that situation], and he’s done that all year.”

Both Essner and senior courtesy runner Coley Leimbach were in scoring position with one out, but junior Josh Randol was struck out for the third and final out of the first inning.

Hillsboro was able to answer with two runs of its own in the top of the second inning with two outs. Welker had walked a batter before getting out number two, but he then allowed a one-run double at the next at bat.

The Hawks tied the game one batter later as Isack Hamilton sent another pitch to right field for a double to make the score 2-2.

It wasn’t until the bottom of the third inning when Jackson regained and held onto the lead for the remainder of the game when Crosnoe was able to advance home from second base off an error.

Leimbach, who was courtesy running for Harris once again, was then sent home by Randol, who came up with Jackson’s second triple of the game to give his team a 4-2 lead.

Martin, who was playing in center field before going to the mound, drove Randol home with a fly ball into left field for a single.

Following the inning, Welker recorded his first two strikeouts of the inning to make quick work of Hillsboro in the top of the fourth.

Jackson’s at bat was not much longer as Welker hit into a double play after senior Bo Goddard was walked with Hahn hitting a pop fly into left field for the final out.

This led to Hillsboro making it a one-run game as Michael Brewer hit a two-run homer with two outs following a defensive error by Jackson to allow one runner on.

With the score at 5-4, Hillsboro brought in a new pitcher, who managed to walk four-straight batters in the bottom of the sixth inning. This brought Hahn up to bat with the bases loaded after a run was brought home via a walk.

At a 1-2 count and no outs, Hahn hit Jackson’s third and final triple with a fly ball into right field to send Goddard, Welker and Crosnoe home to give the Indians a 9-4 lead.

“The big thing in the six inning was when Landon Hahn steps up, who has had an absolutely terrible day at the plate,” Coach Austin said. “He comes up, and he is very mentally tough, and he stays back and hits the ball in the gap.”

Jackson meets Poplar Bluff (21-2) in the district championship game, the same team that ended the Indians season one year ago in last year’s title game.