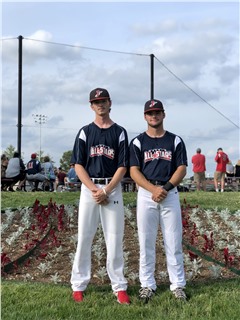 Two members from this year’s Jackson baseball team competed in the Missouri High School Baseball Coaches Association Class 5 All-Star Game on June 15 at the College of the Ozarks.

Former Indians shortstop Landon Hahn and pitcher Tanner Hecht, who graduated in May, led the West team to victory over the East squad 7-6 in their final high school contest.

Hahn went 3-for-5 in the contest and had two runs batted in along with two stolen bases. Hecht pitched three scoreless innings for the West and finished with a total of five strikeouts.

Both of these players will continue their careers at the college level as Hahn signed with Southeast Missouri State before the start of the 2019 season.

Hecht verbally committed to Missouri Valley last Wednesday after his performance in the all-star game.

Hahn and Hecht each garnered first team SEMO All-Conference and Class 5 District 1 All-District honors this year as Jackson finished the season 20-9. The Indians fell to Hillsboro in the semifinals.

Even though Jackson wasn’t able to capture a second-straight district championship, it was still a historic season for Hahn. He served as the team’s leadoff hitter, finishing with a team-high batting average of .432, which ranks fifth all-time in program history.

Hahn also led the Indians in hits with 41, and this mark was one hit away from tying for most hits in program history set by Jarrett Newell in 2016. The record Hahn broke was Jackson’s most runs record as the future Redhawk scored 44, besting the previous record of 38 set in 2010.

Finally, Hahn was one stolen base away from tying the program record of 34, which was set back in 2004. He shared the honor of this year’s SEMO Conference Player of the Year with Sikeston’s Nate Self.

It was also a historic season for Hecht on the mound for Jackson, finishing tied for third in most single-season wins at seven. He also finished with the fourth-best earned run average at 1.24.