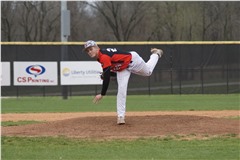 On Thursday, April 19, Jackson junior Tyler Martin was one out away from what every pitcher dreams of accomplishing — a perfect game.

Martin (5-0) received the start for Jackson’s baseball against SEMO Conference, Class 5 District 1 opponent Poplar Bluff (13-2) on that day, which was the same team that beat the Indians in last year’s district championship game to end their season.

Through 7.2 innings, Martin, along with the defense behind him, did not allow a single runner on base.

Players like junior shortstop Landon Hahn and senior second baseman Justice Crosnoe made the throws to first base for an out while outfielders such as seniors Cole Welker and Bo Goddard caught the fly balls.

It wasn’t until who could’ve been Martin’s last batter faced for the perfect game, senior Turner Fritts, that a Mule reached base.

With two outs, Martin threw three balls to start the at bat while his fourth pitch was a strike looking. His next pitch would be ball four to walk Fritts and bring his perfect game to an end.

Poplar Bluff’s next batter, senior Mason Libla, reached off a ground ball for an error, which was made by senior first baseman Carson Barnes.

With two men on and two out for the Mules, sophomore Sam Persons was up to the plate.

Martin made easy work of the sophomore as he threw three straight strikes for the final out for the complete-game no hitter.

“We’ll take the complete game, no hitter — they can have the perfect game, but [Martin] was just fantastic today,” Jackson head coach Bryan Austin said. “He was locating his fastball, and he was locating it out. He had an extremely high strike percentage. He could throw his curveball in any count today, and it was fantastic.”

Offensively, Jackson was led by junior Tyler Harris and Barnes as they tied for a game-high two runs batted in.

Harris’ RBIs came in the bottom of the first inning after Poplar Bluff sophomore pitcher Noah Burkey walked the top of the order.

On a 2-2 count, Harris sent the ball flying to centerfield for Welker and Crosnoe to reach home plate.

Martin was up after Harris, who hit into a double play, but Hahn was still able to cross home for Jackson to take a 3-0 lead over Poplar Bluff in the first inning.

“The big part of our game offensively is to score first, and then try to get a big inning with three or more runs,” Austin said. “We were able to do that, and what that did, it set the table for Tyler to be able to relax on the mound. He was great after that.”

Both teams went scoreless in the second inning, but in the bottom of third it was Harris being able to send another runner home. Instead of hitting a fly ball, Harris hit a bunt for the sacrifice out, which allowed Crosnoe to score the Indians fourth run.

The fourth and fifth innings were scoreless with Jackson on top 4-0, but with two runners on base and two outs in the bottom of the sixth, Barnes tripled off a fly ball to centerfield for two runs.

Jackson ended up defeating the Mules 6-0 for the team’s 12th win of the season. The Indians then competed in the Notre Dame Showcase on Saturday, where they went 1-1 at home.