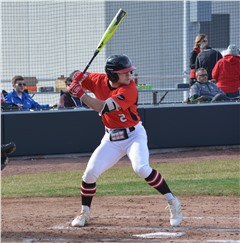 Last week, the Jackson baseball team went undefeated and picked up three wins over Class 5 District 1 opponents and now sits at 13-6 overall. The Indians first faced off against crosstown rivals and SEMO Conference foe Cape Central, where they prevailed 5-1 in eight innings.

Jackson senior Tanner Hecht pitched a complete game against the Tigers (4-6) and finished with four strikeouts, while allowing six hits and only one run.

Fellow senior Landon Hahn recorded a team-high two hits for the Indians, who also scored the tiebreaking run in the top of the eighth inning. He also came up with a run batted in the third.

The Indians were able to add three more runs following Hahn’s score as junior Blaise Winder came up with an RBI double in the next at bat. Senior Seth Essner scored the final run after Cape walked a batter with the bases loaded to make it 5-1.

Hahn and Hecht continued their success over the weekend in a doubleheader against district opponents Farmington (3-10) and Northwest (4-8) at Farmington.

“It’s a tough setup when you have to go play district games — they’re on the road and you’re visitors in both games,” Jackson head coach Bryan Austin said. “Very thrilled to come out of here 2-0.”

Jackson faced the Knights in the first game as the team was able to win handedly 10-3, while Hecht pitched another complete game to pick up his fifth win of the year.

In seven innings, Hecht recorded two strikeouts and allowed three hits for three runs with one walk. This allowed the Indians to score 10 runs off 13 hits as Hahn finished 3-for-5 at the plate with two runs and an RBI.

“Tanner has been fantastic for us — he was locating three pitches today,” Coach Austin said. “What I liked the most he was just flat out competing on the mound. The walks were way down, he trusts the defense behind him and we can’t ask for more out of Tanner right now.

“He had a great Cape Central outing, and another great out against Farmington, who has some boppers in their lineup.”

Junior Seth Spraggs batted near the bottom of the lineup against Farmington, where he managed to record three hits of his own with two RBIs and also scored two runs. Essner finished with two RBIs against the Knights as well.

The final game of the day was not won so easily as Jackson managed to defeat Northwest 7-5 after being down one run heading into the final inning.

The Indians were slated as the away team, so they had to at least tie the game in the top of the seventh inning to try and come away with a win over the Lions.

“In game two we put ourselves in a bad spot by some of the mistakes we made, but we did show a lot of toughness late by us competing,” Coach Austin said. “We ended up winning the game on the bases as we were able to put ourselves in scoring position. We were fortunate with the kids we had [on base] at the time.”

Enter Hahn, who with one out and down 5-4 in the seventh inning, reached first base off a fly ball.

After Spraggs’ performance against the Knights, he found himself batting second in the lineup for Jackson against Northwest.

Hahn was able to steal second base during Spraggs’ at bat, who eventually grounded out for out No. 2. Hahn still managed to reach third base to be in position for the tying run on the play.

In the next at bat, senior Tyler Harris recorded his fourth hit of the doubleheader to send Hahn home for the tying run. Fellow senior Josh Randol batted cleanup for the Indians, and he drove in pinch runner junior Lane Crowden for the Indians to take a 6-5 lead.

The Lions decided to change pitchers following the lead exchange, which resulted in Jackson scoring a seventh and final run off a wild pitch.

Senior Tyler Martin started the game on the mound for the Indians, but he only lasted three innings after allowing Northwest to score three runs off four hits and four walks.

Coming in relief for Martin to pick up the save was freshman Will Richardson, who pitched the final four innings and only allowed two runs off three hits and two walks. He finished with four strikeouts.

“That’s a big spot for a freshman to come in right there,” Austin said. “We were tied when Will comes in, and he came in right away pounding the zone and cutting loose some velocity. He had a fantastic game for us.”

Hahn produced a game-high three hits and two runs along with an RBI single, who is currently Jackson’s leader in hits (24), runs (29) and stolen bases (22). The Southeast Missouri State signee is also batting .387 with 11 RBIs and has one of the team’s three home runs.

“[Hahn] is a special kid and a special player — those don’t come around very often,” Austin said. “We’re fortunate that we have him with us because he’s a spectacular person and athlete. He makes us so much better, and he can put us ahead in games because of his base stealing and offensive ability.”

The Indians now only have seven games remaining on the regular-season schedule along with the SEMO Conference Tournament. Jackson will face conference opponents Dexter (2-10) and Poplar Bluff (12-3) this week.