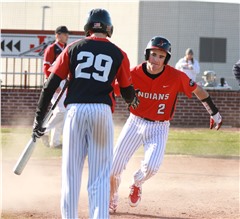 The rain could not contain the Jackson baseball team last week as the Indians were able to gain two SEMO Conference victories, both coming at Capaha Field.

It only took the Indians five innings to advance to 2-0 in conference play as they blanked the Bulldogs 10-0.

“We’re playing really hard,” Jackson head coach Bryan Austin said. “That’s what we knew [going into the season] is that we have kids that compete extremely hard.”

Junior Tyler Martin received the start on the mound for Jackson, which acted as the home team in this contest.

Martin earned the win by pitching a complete-game shutout as he recorded six strikeouts while only allowing five hits.

“[Martin] was outstanding again,” Coach Austin said. “He was really thrilled to be on the mound today because his last outing at Ste. Genevieve he did not have his best stuff even though he threw a really good baseball game.

“He had really good stuff [against Notre Dame], and that’s outstanding because of the temperatures now make it hard to grip baseballs. For the type of curveball he throws it’s a hard grip that he has to have. These conditions are not good for that.”

Notre Dame senior Reid James did not manage to have the same success through 3.2 innings. Jackson recorded 10 runs off six hits and four walks against James, with four of those runs being earned.

Offensively, the Indians were led by lead-off hitter in senior Cole Welker, who scored three runs off two hits and a walk while also batting one runner in.

Welker was able to tie for the game-high in runs with junior Landon Hahn, due to stealing his way into scoring position.

This is something Coach Austin said his team prides itself on, which has combined for 37 stolen bases thus far.

Scoring eight of Jackson’s 10 runs against the Bulldogs was Welker, senior Justice Crosnoe and Hahn, the top-three batters in the Indians lineup.

Jackson’s No. 4 hitter in junior Tyler Harris struck out in his first at bat, but he redeemed himself in the bottom of the third with a two-run single.

Currently batting sixth in the lineup for the Indians is junior Seth Essner, who has moved all the way up from the No. 9 spot from the beginning of the season.

Essner is the only Indian hitting over .400 with a team-high .407 batting average among starters with 11 hits, six RBIs and five runs.

One of those hits and two of those RBIs came in the bottom of the fourth inning against Notre Dame when he hit a fly ball into right field to send Crosnoe and Hahn home for the final two runs.

On the next day Thursday, April 5, Jackson went seven innings with New Madrid County Central as the Indians were down 2-0 in the first four innings.

Junior Tanner Hecht started on the mound for Jackson, but only pitched 1.1 after allowing two runs off three walks.

Coming in relief to pitch a 5.2 inning no-hitter was junior Lance Kluesner, who recorded seven strikeouts for the win.

The Indians offense produced two runs in the fifth, seven in the sixth and three more in the seventh to defeat the Eagles 12-2.

Welker scored two runs off two hits and one walk while Crosnoe also had two hits with a game-high two RBIs and one run.

Jackson faced crosstown rival Cape Central Monday, April 9, and then traveled to Kennett the day after before its doubleheader against Farmington and Northwest this Saturday at home.

Not included in this week’s paper: The Indians were able to defeat Central 9-8 through seven innings as Martin earned the winning by pitching 5.2 innings despite allowing eight runs off five hits and one walk. He did manage to record eight strikeouts.

Offensively, Essner had a game-high three hits while batting in one run and scoring two himself. Harris and junior Boone Gartman recroded two hits a piece while Gartman had a team-high three RBIs.

This brings Jackson’s SEMO Conference record to 4-0 and will face conference opponent Dexter (0-6) on Tuesday, March 17, a team that recently fell to Sikeston 11-0 at home.