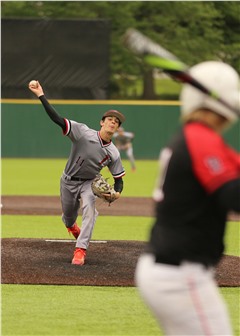 With only two district losses for the Jackson baseball team (21-7) this season, the Indians were seeded No. 1 in this year’s Class 5 District 1 Tournament starting on Friday, May 12, at Hillsboro.

One loss Jackson has suffered in district play this season was to No. 2 seed Poplar Bluff (17-5) at 5-3 April 24 on the road. Senior pitcher Colten Weber (4-1) started against the Mules and pitched four innings while allowing five hits, five runs, walked four batters and had three strikeouts.

In Weber’s last two starts following the Poplar Bluff game, he has went 2-0 with 19 strikeouts while only allowing one run off three hits.

One of those games was against Dexter in a 3-1 win over the Bearcats in the semifinal round of the SEMO Conference Consolation Round at Capaha Field on May 1.

Jackson fell to Cape Central 3-2 in the first round of the tournament, which was the second district loss the Indians have suffered this season.

The Indians previously defeated Cape Central 15-2 on the road April 11 when Weber pitched a complete game through five innings with 10 strikeouts while only allowing two hits.

By defeating Dexter in the semifinals, Jackson faced Kennett for the SEMO Conference Consolation Championship following the win.

The Indians had a total of 15 hits for eight runs in the game with junior Cole Welker hitting a one-run single to send senior Drew Brown home for the walk off to defeat Kennett 8-7.

Jackson had five days off before the team’s double header at home on May 6 where Weber got his last win against Malden at 10-0 to start the day.

The team’s final game of the double header was against Cooter where Jackson won handedly at 14-4. The Indians had 14 hits in the game with junior Justice Crosnoe tying for the team-high with three.

Two all-time records in program history were broke in this game, which were team total hits and single-season RBIs by Crosnoe with 34 on the year.

Jackson has also broken the RBI record this season as well as most runs scored with currently a total of 207 RBIs and 234 runs.

The Indians are on pace to also break the single-season wins record, which Jackson set two seasons ago at 22 wins.

If Jackson reaches 22 wins, this will tie head coach Bryan Austin with former coach Sam Sides, who was with the team for seven seasons, for most career wins in Jackson baseball history.

The team’s leadoff hitter, Cole Welker, is only one triple away from breaking the program’s single-season record of 6.

Welker is also currently tied for second in most runs scored with 35 and needs four more to break the record of 38, which was set in 2010 by Tyler Qualls.

Jackson only has one more regular-season game on its schedule, which will be on the road against Class 4 Perryville (14-4) Today, May 10.

Being the No. 1 or No. 2 seed in the district tournament means a first-round bye for both teams, and Jackson’s first opponent will be the winner of Farmington (9-11) vs. Northwest (3-11).

Jackson has defeated both teams already this season starting with Northwest in a 5-2 win on the road on April 3.

Weber started the game against Northwest and pitched six innings while allowing just two runs off four hits and managed to strike out six batters.

Senior Jarrett Newell started against Farmington, and Jackson defeated the Knights 9-2 thanks to his 5.1 innings pitch with no runs allowed on seven hits.

If Jackson wins, the team will then advance to the district championship where the Indians will face the winner of No. 2 seed Poplar Bluff vs. No. 3 seed Hillsboro or No. 6 seed Cape Central on May 15 at Hillsboro.