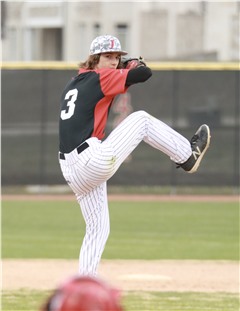 The Jackson baseball team’s offense was on display in its season opener during a 9-1 win over Class 2 Neelyville on Friday, March 16, at home.

The Indians tallied a total of 13 hits in the game as junior Tyler Martin recorded a team-high three hits and four runs batted in for a .750 batting average.

“I thought [Neelyville] started a guy on the mound that was pretty good,” Jackson head coach Bryan Austin said. “He was locating three to four pitches and was throwing in the upper 70s. I thought we hit the baseball extremely hard, but we had a lot of balls that were hit hard that were not hits, so I’m very proud of our approach at the plate.”

Martin also pitched three innings in relief for senior Cole Welker, who earned the win as he pitched the first four innings with six strikeouts and allowed four hits.

“Early on [Welker] was locating three pitches, and he got a little bit tired at the end,” Coach Austin said. “Our plan was to have him throw around 85 [pitches] for his first start. He kept all [of Neelyville’s] hitters off guard, and he was able to beat some guys with the fastball. He was also locating the curveball and changeup very well.”

Welker remained in the game since he and Martin switched positions in the fifth inning as Martin took over at the mound whereas Welker went to centerfield.

Welker only recorded one hit in the batter’s box, but was walked once allowing him to score two of Jackson’s runs.

Also scoring two runs for the Indians was senior second baseman Justice Crosnoe, who tied for second in hits with three.

Crosnoe was walked on his first at bat and struck out during his second, but on his third trip to the plate in the bottom of the fourth he tripled on a ground ball past third base.

This was the highlight of the inning for Jackson as the fourth was one of the three out of six innings where the Indians did not score a run.

“I thought up and down the lineup we had great speed all day long,” Coach Austin said. “I thought we could’ve taken advantage a little bit more on the bases, but we were at a point where there wasn’t a really good feel for it early just because of the situations. Later on in the game we had a lot more guys on base — we got to see how fast we were on the bases, and that’s when the score turned over pretty quick when we were able to start running.”

Jackson was able to score four runs in two innings starting in the first where junior catcher Tyler Harris grounded a ball for a single between second and third base with three men on.

This sent Welker and Crosnoe home for two runs and senior shortstop Landon Hahn to third base.

Martin, the team’s fifth batter in the lineup, doubled on a fly ball to right field to send Hahn and junior baserunner Bryce Vincent home.

“I thought we squared the ball up the entire day, and I was really proud of our baserunners for taking extra bases and trying to extend singles into doubles,” Austin said. “There’s multiple guys who might have not had any hits, but they squared the baseball up all day long.”

The final inning where Jackson batted in the bottom of the sixth is where the Indians scored their final four runs.

With the bases loaded and no outs, Crosnoe sent junior third baseman Boone Gart-man home with a single, who started the inning with a double on a fly ball to left field. Hahn hit a line drive to center field for a single as Welker scored.

Defensively, each team had one error as Hahn recorded Jackson’s lone of the game in his new shortstop position. He was mostly in the outfield for the Indians last season.

“Early on they are excited to be out here,” Coach Austin said. “It’s game one, so they have some butterflies in their stomach, and some footwork turns poor and we make some decisions like that, but overall we did a great job.”

Another first-year starter in the infield is Harris, who was able to throw one runner out at second base and save a run in the top of of the fourth inning. Hahn also made a nice play defensively in the fourth when he leaped for the ball for an out.