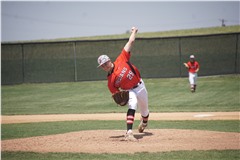 One year ago, the Jackson baseball team’s season was ended by rival Poplar Bluff in the Class 5 District 1 Championship game.

Last week on May 14, the Indians exacted their revenge by ending the Mules season in this year’s district title game with a 5-2 win to advance to the state playoffs.

“We feel like that we’re two big teams in the area, and it’s been a heated rivalry at times,” Coach Austin said. “We feel really great that we were able to take two out of three games from them this year. The key was we got the game that mattered at the end.”

Junior Tyler Martin threw a complete game for Jackson in seven innings, where he allowed eight hits for two runs while walking two batters and striking out one.

“He didn’t have his best stuff at all to start the game,” Coach Austin said. “In the first three innings he strugg-led to locate the breaking ball. They were doing some things to get his timing off, and when he got to the fourth he finally found all of his pitches and he kind of cruised through that area.”

Austin went on to say his defense was able to make crucial outs throughout the game with one of those plays being made by recent Fontbonne signee in senior outfielder Cole Welker.

Leading the Indians at the plate was senior Justice Crosnoe, who recorded a game-high two runs while tying for the game high in hits with two in three at bats.

“When you speak of Justice Crosnoe, the key statistic is he didn’t get out in the district tournament,” Coach Austin said. “He was on base every single time the entire tournament, which is huge. We were able to take advantage of miscues. We had plenty of opportunities early where we had runners in scoring position, but we could just not get the two-out hit.”

Jackson plays Lindbergh in the Class 5 Sectionals on Tuesday, May 22, which is the same team that ended the Indians 2016 season in the first round of the playoffs with a 5-0 win.