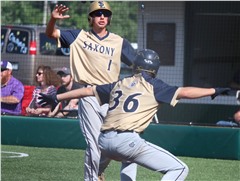 No matter what happens at this year’s Class 3 Final Four, the Saxony Lutheran baseball team has had its best season in school history.

On this day last week, the Crusaders defeated District 3 Champions West County 7-6 with a walk-off run in the bottom of the seventh inning to punch their ticket to state for the first time ever.

“[This win] kind of gave me goosebumps,” Saxony head coach Paul Sander said following the game. “You don’t think about [reaching the Final Four] until you start getting a little closer. You win a district crown, and you think, ‘I’m still a little ways away.’ Then you get within one, and you think, ‘Well, maybe.’ We knew this game with West County would be the toughest one of them all.”

Coming up with the final hit of the game for Saxony to win was junior Mason Lewis, who also started the game on the mound for the Crusaders. He threw for 6.1 innings and recorded four strikeouts, while tying for a game-high two hits at the plate.

Saxony was forced to use its top three pitchers against Malden in 11 innings two days prior for the team to win its first sectional championship in 13 years.

“Mason hasn’t had the year he’s wanted at the plate — he’s had it on the mound,” Coach Sander said. “When he got the hits today, I put my arm around him after the game was over, and I said, ‘That’s why you’re still batting fifth.’ The ability is there — he just hasn’t been able to get any rhythm this year. But he sure as heck got it when we needed it.”

Lewis’ first hit came in the bottom of the first inning with two outs to propel Saxony to a 2-0 lead over the Bulldogs. The line driver went just over the glove of West County’s shortstop Zack Francis as center fielder Peyton Nipper made an error for junior Jack Foeste and sophomore Tanner King to reach home.

West County did not go away easily, though, and tied the game in the following inning with a 2-run single by Dakota Dowd with two outs.

The Bulldogs went up by two more runs in the third and fourth inning with solo scores, setting up for possibly the most crucial inning of the game for Saxony.

The Crusaders went scoreless and stranded a total of three runners in the second and third inning, so they were desperate for something to go their way in the fourth.

Foeste, who in his last at bat struck out swinging in the bottom of the second, came up with two runners on base and two outs down 4-2. The count went to 3-2 as Foeste wasn’t going back to the dugout without a hit.

“I got down in the count and worked it back to full,” Foeste said. “He just threw the inside fastball, and I just put bat on ball.”

Foeste knocked the ball out of the park with a 3-run homer over the 305-foot left field wall to give Saxony a 5-4 lead to keep the Crusaders dream of reaching state alive. He didn’t even know it was a home run after he hit the ball because he, “Just started running.”

Both teams ended up scoreless in the fifth inning as the next run of the game was scored by Saxony’s lead off hitter Hunter Bilek, who hit a solo home run in the bottom of the sixth to give Saxony an insurance run.

“We’ve only hit one homer all year [before this game],” Coach Sander said. “You just feel like it’s destiny that we’re where we are at. Jack is a great hitter, Hunter is a great hitter, but I don’t know where the power is coming from. But they got it, and they got it when we needed it, so it’s just a great feeling for our school.”

In the top of the seventh, Lewis was able to force an out but walked two batters before being replaced by sophomore Will Ledure, who had yet to pitch a varsity inning all season.

Saxony wasn’t able to bring in pitchers like sophomore Eli Brown, senior Austin Fritsche or King because of the pitch-count rule, and junior pitcher Kaleb Kiefer didn’t travel with the team.

Ledure hit the first batter he faced with the pitch to load the bases and also walked the next batter for West County to make it a 1-run game with only one out.

The Bulldogs Cody Ruble then sent in the tying run off a fly ball to senior center fielder Zach Meyr, who was able to make a play to hold another runner from scoring.

The next at bat would be West County’s last as Ledure was able to force Tyler Price into a double play for King and Bilek to make throw outs.

“[Ledure] comes in and hasn’t pitched a varsity inning all year — his first appearance,” Coach Sander said. “Can you imagine how that kid felt as a sophomore to get two outs there? A little shaky with the first couple batters, but he got [Price] to hit the ground ball and the double play. If he doesn’t get that, we we’re on our way home right now.”

With the game tied at 6-6, the Crusaders had their three, four and five hitters coming up to bat for the bottom of the seventh with the chance of another walk-off. Against Malden in the sectional round, Fritsche had a walk-off RBI single to send Saxony to the quarterfinals.

King and Fritsche both reached base as Tanner got a single, while Fritsche bunted to get King into scoring position. Fritsche would’ve been thrown out, but West County’s first baseman Ty Simily couldn’t come up with the catch.

This allowed Lewis to end the game by hitting a fly ball to center field for King to score the winning run.

“It’s the best feeling in the world,” Lewis said. “I just can’t describe it — I’m just blown away. We get to go play the best guys in the state.”