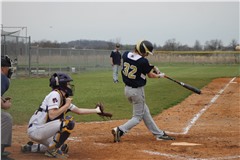 In the second regular-season rankings by the Missouri High School Baseball Coaches Association released on Monday, April 17, Saxony Lutheran (9-2) was ranked eighth in the Class 3 Top 10.

The Crusaders had not received any votes in the preseason rankings nor the first regular-season rankings released on April 3 by Class 3 district representatives.

Saxony is riding a six-game winning streak and is undefeated in the month of April after falling to Class 2 Bloomfield 6-3 at home on March 29.

Three of Saxony’s six wins came during the Oak Ridge Tournament hosted from April 6-8. The Crusaders scored a total of 37 runs in the tournament while only allowing nine.

In Saxony’s first game of the tournament against Chaffee (10-3), junior Jakaota Walther drove in four batters off a triple and a double to defeat the Red Devils 12-7.

Walther then threw a shutout in Saxony’s next game in the tournament against Advance in an 11-0 win as he only allowed three hits and had three strike outs. Leadoff hitter Jake Wyatt scored three runs in the game and had two doubles with an RBI.

Sophomore Zach Meyr, who is currently one of the three Crusaders with a .400 batting average [.405], had three hits in the game for doubles in his four at bats.

Meyr leads Saxony in both runs [17] and hits [15] while ranking eighth in RBIs being No. 2 in the team’s batting lineup.

With its 11-0 win over Advance, this put Saxony in the championship game of the Oak Ridge Tournament to face Leopold (5-6) April 10.

This game went short by lasting five innings since the Crusaders jumped to an early 10-1 lead after the first two innings.

Leopold made a total of three errors in the first inning resulting in three singles and one score.

The Wildcats final error of the first inning allowed Saxony to load the bases, which brought sophomore Luke Richmond up to bat.

Richmond hit a fly ball to right field for a single, which allowed all three base runners to cross home plate to finish with a total of four runs in the first.

Leopold made two more errors in the bottom of the second inning with the first coming after Walther hit a line-drive single for two RBIs in Saxony’s six-run inning.

The Crusaders scored three runs in their final inning at bat in the bottom of the fourth to defeat Leopold 14-2 off just six hits.

Coming off an six-day break, Saxony has two games this week and will travel to face Oran (7-2) Tuesday, April 18. The Crusaders will then come back home to host St. Paul Lutheran (3-13) the next day.

Saxony has three more games in April following this week starting April 25 against Bell City (8-5) at home, April 26 at Chaffee and finally back home against Charleston (4-11).