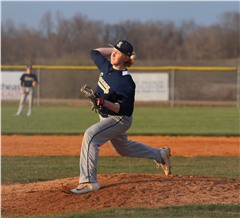 Saxony Lutheran baseball is having to start the season by facing three teams from its district, Class 3 District 3, in the first four games.

The Crusaders were able to take care of business in their season opener against district opponent Woodland on the road Wednesday, March 21, by defeating the Cardinals 17-2.

Saxony combined for a total of 12 hits against Woodland as juniors Zach Meyr and Luke Richmond tied for a team-high two hits. The two also combined for four runs and three runs batted in.

Starting on the mound was sophomore Mason Lewis, who pitched all five innings with three strikeouts while only allowing two runs off two hits.

Thursday, March 22, was the Crusaders home opener as they hosted district opponent Jefferson out of Festus.

Starting on the mound for Saxony was senior Jakoata Walther, who only lasted three innings as he allowed four runs off five hits and four walks. Walther did manage to throw five strikeouts.

This was one of the problems Saxony head coach Paul Sander had with his pitching staff that day is they were trying to throw strikeouts instead of throwing for contact to allow the defense to make an easy out.

“I think we threw too many pitches,” Coach Sander said. “When you have two pitchers out there that pitch seven innings and you’ve thrown over 150 pitches, what that tells you is you walked a bunch of guys and you struck out a bunch of guys. We didn’t pitch enough to contact. We had 11 strikeouts, but we also had nine walks.

“You’re in a situation there where you have to let somebody put the ball in-play more often instead of relying on the strikeout. Then you get into this walk situation especially early in the game.”

Walther allowed Jefferson to load the bases in both the first and second inning. He forced a pop up for an out to strand the three runners in the first, but he allowed three runs in the second after loading the bases once more.

After Saxony allowed the third run off an error, Walther struck out the next two batters to end the inning.

Jefferson was able to make quick work of Saxony’s batting lineup in the first two innings by only allowing one runner on base due to a walk.

Walther was able to do the same to Jefferson in the top of the third inning as he only allowed one hit. He threw two strikeouts and forced the other out on a line drive.

With two outs and no one on in the bottom of the third, Meyr was able to reach second base with a fly ball that was dropped by the outfielder.

Senior Austin Jarvis then drove Meyr home for Saxony’s first run of the game with a nice-placed hit, which became an error, leading Meyr to advance home from second base to make it 3-1 Jefferson.

Jarvis stole second base during Walther’s at bat, but Walther hit a fly ball into right field for the third and final out.

The top of the fourth inning was when Walther was relieved by junior Austin Fritsche after Walther allowed two doubles and one run.

Fritsche walked his first batter to put a second runner on the base, and allowed one run off a sacrifice out for the Blue Jays to extend their lead to 5-1 in the fourth.

Saxony answered Jefferson with one run in the bottom of the fourth as freshman Tanner King forced an error on a ground ball with two runners on and two outs.

Both teams loaded the bases in the fifth innings, but each came away scoreless as Fritsche struck out three batters and Saxony hit into three outs after getting three on.

“That’s the killer,” Coach Sander said. “I don’t know that I ever remember in the same inning where you have bases loaded and no outs in the top and bottom of the inning where neither team scored. They did the same thing we did, but we needed it a lot worse than they needed it. When we lead off the inning with three hits, and Zach Meyr is my fastest kid, and I stop him at third with nobody out thinking I don’t want to get him thrown out at the plate.

“I don’t know if he coud have scored or not, but you think he’s going to score with nobody out. Then [after your top three hitters get on base] you have your four, five and six guys coming up.”

Coach Sander simply described the bizarre event as “that is baseball,” and that he thinks his team is evenly matched with Jefferson.

The Crusaders allowed two more runs in the top of the seventh.

Only one more batter for Saxony was able to reach base in the game, coming in the seventh and final inning when Walther grounded for an error with two outs. Lewis then grounded out to end the game.

On the following day Friday, March 23, Saxony traveled to Bloomfield and came away with a 20-2 victory as Lewis went five-for-five with a grandslam home run.

King took the mound for the first time in his career, where he pitched four innings, striking out eight and walking four while only allowing two runs and one hit.