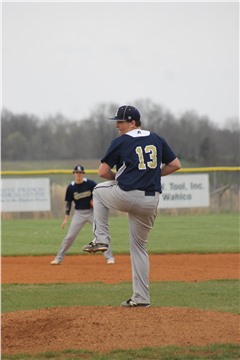 In the Saxony Lutheran baseball team’s fourth home game of the season on March 29, the Crusaders faced off against Bloomfield after defeating Delta 11-0 the day before at home thanks to a no-hitter thrown by sophomore Austin Fritsche.

Saxony’s No. 1 pitcher, senior Tyler Amos (1-1), was the man at the mound against the Wildcats. Amos had three strike outs, two walks and allowed no runs in the first two innings before a long third inning for the Crusaders.

Saxony was also held scoreless through the first two innings with Bloomfield’s pitcher having three strike outs and only allowed two runners on base.

Amos walked the first batter in the top of the third inning then struck out the next batter. He then allowed a single past third base and into right field.

Bloomfield’s runners advanced to second and third after a wild pitch from Amos, which led to a runner scoring on that at bat following a hit into right field for a single.

The next batter connected with Amos’ third pitch for a double to send both runners on base home to give Bloomfield a 3-0 lead over Saxony.

Amos and the Crusaders were able to get out of the inning not allowing another run but only another hit.

Just like the first two innings for Saxony, only one batter was able to get on base in the third inning for no score.

The fourth inning went scoreless as well for both teams for Bloomfield to maintain its 3-0 lead.

The top of the fifth inning was quite similar to the top of the fourth as Bloomfield’s first two batters were thrown out at first base with Amos striking out the final batter in the inning for another three quick outs.

The scoring drought continued for the Crusaders in the fifth inning even though they had two runners get on base.
Going to the top of the sixth inning, Bloomfield’s first two batters got on base with singles, which then forced
Saxony’s coaches to take Amos out of the game at pitcher.

Saxony swapped Amos with junior Jakoata Walther from shortstop with two men on and no outs.

Walther’s first pitch was bunted for the runners to advance to second and third, but the batter was thrown out at first.

Walther struck out the next batter to get out No. 2, and the final batter for Bloomfield grounded the ball for Walther to throw him out at first to end the top of the inning.

Saxony got three runners on base in the sixth inning, but one was thrown out and two were stranded for the team to go scoreless once again.

The seventh inning did not fair well for Walther as he allowed Bloomfield to score three more runs to take a 6-0 lead.

The bottom of the seventh is where the Crusaders offense finally sent a runner home after loading the bases.
Saxony scored three runs in the inning with one coming from a hit and the other two from walks.

Bloomfield replaced its pitcher after the third run was allowed with the replacement getting two straight outs for the Wildcats to defeat Saxony 6-3.

After falling to 3-2 overall, the Crusaders played in its final game of the week on Friday, March 31, at home against Marquand.

Saxony scored a season-high 22 runs off 18 hits, and held Marquand scoreless for the team to get its fourth win of the season.