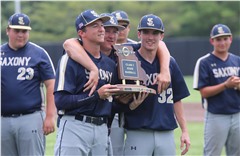 The 15th year of Saxony Lutheran baseball proved to be the best as the Crusaders took third place in this year’s Class 3 Final Four and finished with a program-record 23 wins.

Saxony would have much rather been playing for the state championship in its final game of 2019, but defeating Montgomery County 9-1 in the third-place game was still a sweet finish.

“We feel great — we didn’t play well yesterday — we played fantastic today,” Saxony’s 13-year head coach Paul Sander said. “I stressed yesterday, I do not want to end this season lying down and saying, ‘We’re happy to be here.’ We were happy to be here, but for them to come out today and play the way they did against a very good team — I’m just elated.”

The same player who pitched the game-winner against West County in the quarterfinals to send the Crusaders to state, junior Mason Lewis, got the start.

Lewis went all seven innings against the Wildcats to pick up his fifth and final win of the year, as he only allowed one run off three hits and struck out three.

“He’s had two or three good starts in a row, but today was his best because his pitch count was down,” Coach Sander said. “He only ended up with 82 pitches, and he can throw 105. He was all over the plate and only walked two.

After falling to state runner-ups Fatima 14-2 in the semifinals, it did not take long for the Crusaders to take a commanding lead over the Wildcats.

The next batter, senior left fielder Luke Richmond, was walked, but Montgomery County’s catcher attempted to throw out Ringwald at third base. The third baseman missed the catch to allow Ringwald to advance home for the Crusaders second run.

Saxony’s junior leadoff hitter and second baseman Hunter Bilek doubled to follow for he and Richmond to be in scoring position.

The Crusaders only sent one more run home in the inning as junior utility Jack Foeste singled on a ground ball to make it 3-0.

It was the bottom of the third inning when Saxony scored five of its nine total runs as senior center fielder Zach Meyr scored off an error to start.

The bases were loaded after Bilek was hit by a pitch during the next at bat. Foeste was walked as well, which sent Ringwald home to give the Crusaders a 5-0 lead over Montgomery County.

Saxony forced the Wildcats to use a total of four pitches in the game as their starter junior Carson Parker only went two innings after allowing five hits.

Junior Ethan Abercrombie replaced Parker in the third inning, who only lasted one out after walking Foeste with the bases loaded.

Replacing Abercrombie was senior Jonathan Wright, who had only pitched 5.1 innings heading into state. Wright allowed three runs as Richmond scored on a passed ball followed by Bilek finding home on a sacrifice fly by sophomore shortstop Tanner King.

With Foeste as the only runner left on the bases at third, Lewis came up with a pop fly to right field to send the runner home and give Saxony a 8-0 lead after three innings.

The Crusaders ninth and final run of the game was scored in the following inning as Montgomery County committed yet another error, which allowed junior catcher Ethan Koenig to advance home from third base.

“[Montgomery County] was sloppy, and I’m sure they’ll tell their players they were,” Coach Sander said. “When they got sloppy, we took advantage of it.”

The Wildcats one run was scored by Abercrombie off a sacrifice fly by senior Tristan Camp in the top of the sixth inning. The catch was made by Meyr, but the ball had been hit two deep for him to prevent Abercrombie from reaching home.

One key to victory that always checks out for Coach Sander is if his team made less than six errors, mental errors and walks combined. The Crusaders only had two errors and two walks against the Wildcats.

Against Fatima, however, the number was 17 with 11 walks, three errors and three mental errors.

“The numbers don’t lie,” Coach Sander said. “You’re going to be in the ball game with anybody you play against if you hit the ball. We hit it well in spurts today, and we forced the issue and made them have some errors. I couldn’t be prouder of the kids. 23-4 — it’s a fantastic season.”

The Crusaders were without one of their top players in senior Austin Fritsche, who was forced to depart for the military following the quarterfinals.

Fritsche recorded a pitching record of 5-1 this year with 53 strikeouts. At the plate, he had a .342 batting average, 25 hits, 23 runs and 23 runs batted in as the team’s cleanup hitter.

Saxony had Fritsche’s No. 15 jersey hanging above the dugout and awarded his parents his state medal following the game.

“He’s a big cog in our team,” Coach Sander said. “He’s a character — he’s fun and we love him. He’s been a tremendous part of our team. To miss the No. 4 hitter and our No. 2 pitcher in this tournament is big, but the kids stepped up.”