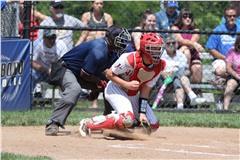 Following a season where the Jackson baseball team came up short in winning its third-straight Class 5 District 1 Championship, the team still managed to have two players earn Class 5 All-State honors.

This is the first time in head coach Bryan Austin’s career at Jackson where two of his players were named All-State.

Junior Justice Crosnoe and senior Braeden Dobbs were the Indians to be named to the Class 5 All-State second team with Crosnoe making it as an infielder and Dobbs as a designated hitter/utility.

“The year before we had one, but having two is an amazing feat especially for our program from just the amount of kids in 5A baseball, and the elite level that it is,” Coach Austin said. “One being a junior and knowing he’s coming back the next season — it means a lot to us.”

This was Crosnoe’s first year as a full-time starter where he managed to break the program’s single-season runners batted in record of 33 with 36.

Crosnoe also had the highest batting average of .419 and on base percentage of .509 among starters for Jackson while also tying for the team-high in hits with 39.

“[Crosnoe] hit in the five hole for us, and when you look at Justice he doesn’t look like a five hole type hitter,” Coach Austin said. “He’s  not the big, bulky guy, but he flat completes at the plate and hits the ball in the gap. He drove in a ton of RBIs for us and plays a solid second base.”

Coach Austin continued by saying whenever Crosnoe is up to bat it, puts the team in scoring opportunity because of his ability to drive the ball with power into the gaps, and also because of his pure speed.

“If [Crosnoe] gets the ball in the gaps he’s so fast that you’re looking at a double or a triple, and he’s a kid that doesn’t strike out very often,” Coach Austin said. “Due to that, his on base percentage is very high because he’s a patient hitter who knows what he’s looking for.”

With his speed, Crosnoe was also able to lead Jackson in stolen bases with 27 and also finished with the same number of runs to rank fourth on the team.

Crosnoe tied with fellow All-State honoree Dobbs and junior Cole Welker for most hits this season where Jackson broke its own single-season hit record of 264 set last year with a total 285 hits in 2017.

In his final season with the Indians, Dobbs had a batting average of .390 tying for the team-high in doubles at nine with 2016 Class 5 All-State  senior Jarrett Newell.

Dobbs and Crosnoe were the only players on Jackson to finish the season with 30 or more RBIs as Dobbs finished second with 30.

Dobbs is coming off a junior season where he was named SEMO All-Conference honorable mention as a utility.

Due to an injury in the jamboree last season, Dobbs started many games for the Indians at catcher, but he did not receive the same opportunities in summer leagues.

“[Dobbs] came back to us with a little chip on his shoulder that he was ready to work in the fall, he was ready to work in the winter, and he was going to prove to people that he was the guy,” Coach Austin said. “It kind of shows when you have a little bit of rejection, and you put a chip on your shoulder, what can happen when you decide, ‘I’m going to prove everyone wrong,’ and that’s what he did.”

Coach Austin said the versatility Dobbs brought to Jackson was one of the key reasons why the Indians won a single-season program high 22 games this year.

“[Dobbs] could catch, play third, he pitched and went 6-0 on the mound for us,” Coach Austin said. “He could’ve honestly moved over and played first, so we were able to move a lot of different guys around based off of who we were pitching that day.”

Five Indians from this senior class including Dobbs will play collegiately, which ties for the most college signees Jackson has ever had in one season.