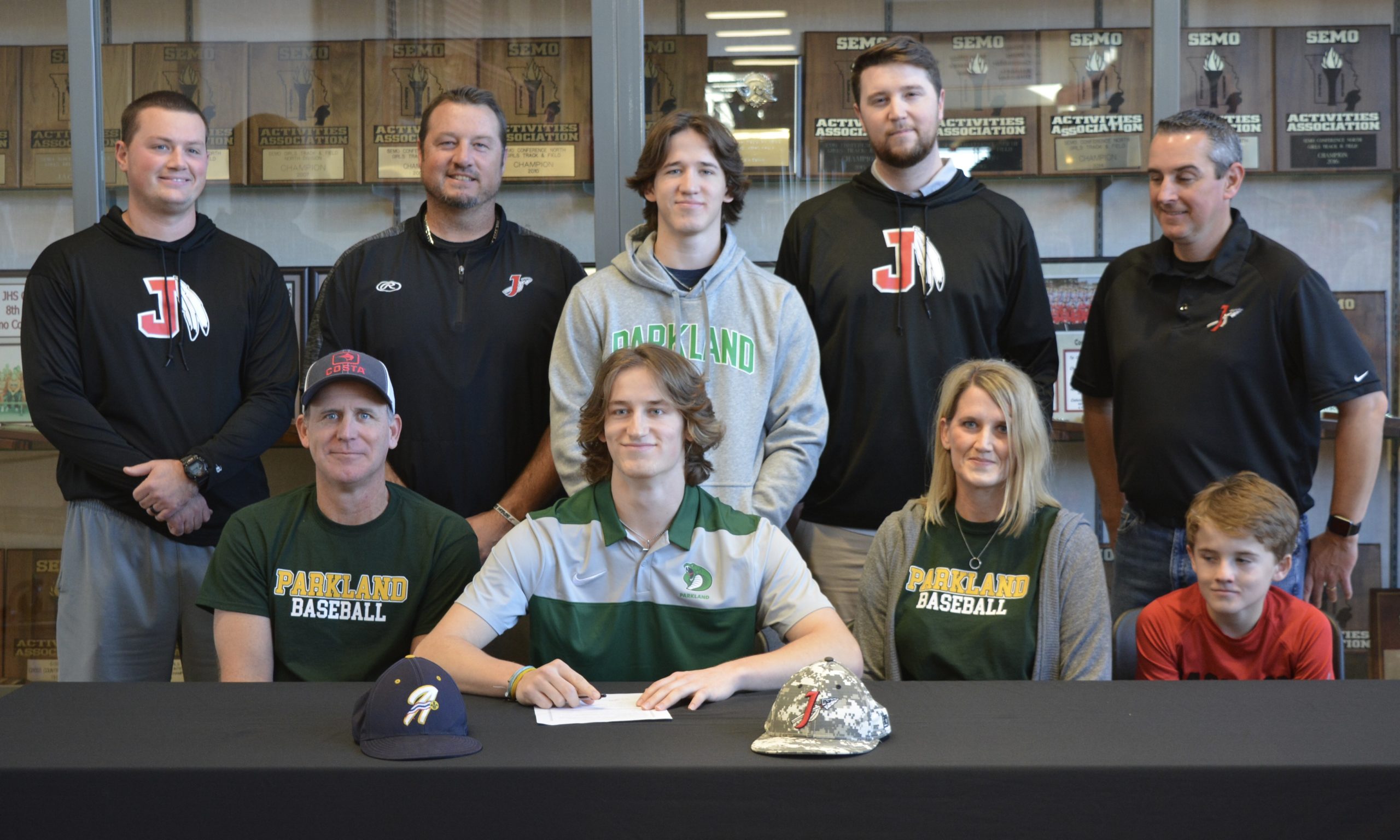 Like most children when they first started competing organized sports, Jackson senior Will Richardson played — you guessed it — baseball.

Not everyone sticks with the sport, but that certainly wasn’t the case for Will since he is going to continue his path on the diamond after high school.

Richardson will do so at Parkland Community College, located in Champaign, Illinois, as he signed with the school prior to Christmas break. Will said everyone at Jackson wants to play a sport at the next level.

“When you can do that, you’re a dude no matter where you’re going. It’s a blessing,” Richardson said. “I felt like Parkland was the place for me with Jonathan Goebel coaching there. It’s a great place and great stop right there next to the University of Illinois. A lot of dudes come from there.”

Unfortunately, Goebel recently accepted a pitching coach position with the Texas Rangers High-A Affiliate Crawdads team and resigned from his head coaching job at Parkland last month. Taking over as Parkland’s new head coach will be Anthony Silkwood, who pitched for Parkland in 2020 and finished his career at Louisville.

What Richardson is excited for the most about the beginning of his college career will be calling himself a “JUCO Bandit.”

“When you go to a four-year school after going to JUCO, you’re ‘the dude.’ Everyone knows you’re just a grinder,” Richardson explained. “I hate using the word grind, but JUCO really is just that. You get a lot of character built up.”

Richardson said baseball has without a doubt become his life and that he wouldn’t know what to do if he didn’t have the sport. Will describes himself as a student of the game, who has been shaped by everything that comes with baseball, such as the hard work he puts into it as well as the bonds he’s formed with teammates.

“Baseball built my personality up. It’s all I do,” Will laughed. “Everyone here at my signing I met through baseball. Even though he’s a football guy, Ashton Flinn played baseball. I think it’s a big story all together — it’s my calling. I just can’t see myself doing anything else.”

Last season with the Indians, Richardson helped Jackson record an overall record of 22-9 while having a .304 batting average, along with 28 hits (eight doubles, four triples), two home runs and scored a team-high 32 runs. Richardson also had 18 runs batted in and 12 stolen bases.

Richardson was also a standout defensively at center field with a .975 fielding percentage as he only had two errors all season and recorded 68 outs. Pitching in relief, Will recorded one save and struck out 12 batters.

Richardson suffered from an elbow injury last spring, which is why he didn’t pitch as much as he would’ve liked to.

All of the rehab Will had to endure due to his injury has made him question, “Is it really worth it to do all this rehab and not pitch?” What made Richardson realize it was indeed worthy of his time is that he’s been playing baseball his entire life.

“I’ve been doing this for 17 years — I’m good. I can go to this junior college and develop for two years — they’ll get me right,” Richardson said. “With all this rehab I’ve been doing, I’ve questioned everything I do. I’ve learned a lot about how the arm works and why I’m doing these different exercises.”

Since he’s had to go through so much rehab, Richardson said it makes him want to go into a field like biomechanical engineering.

“I’m trying to figure out how to make myself better and make everyone else better,” Richardson said. “People are trying to get new methods, and I’m trying them out for myself. It’s really fun to me to learn why we’re doing things and how we can apply it and make me a better athlete.”

During the summer, Will plays for Adidas Athletics in St. Louis. Even though it’s an out-of-town team, he said the program has a family-like atmosphere.

“It’s just a whole bunch of dudes who want to go to the next level,” Richardson said. “It’s really special being on a team where all they do is baseball. Everyone has that same mentality and there are a lot of JUCO guys.”

When describing himself on the mound, Richardson used the word competitor since he doesn’t shy away. For instance, if a batter “chirps” at Will after he strikes them out, he’s going to “go at you.”

“This summer, we’re playing a lot of these Division-I, polished recruits, and I was that little 5-foot-11 lefty on the mound just pumping,” Richardson said. “I pitched against the No. 5 player in the nation, Jason Jones, and broke his bat. I was chirping at him, and that’s when I was like, ‘Yeah, my personality is not this polished, four-year guy. I want to go to JUCO and be a dog.”