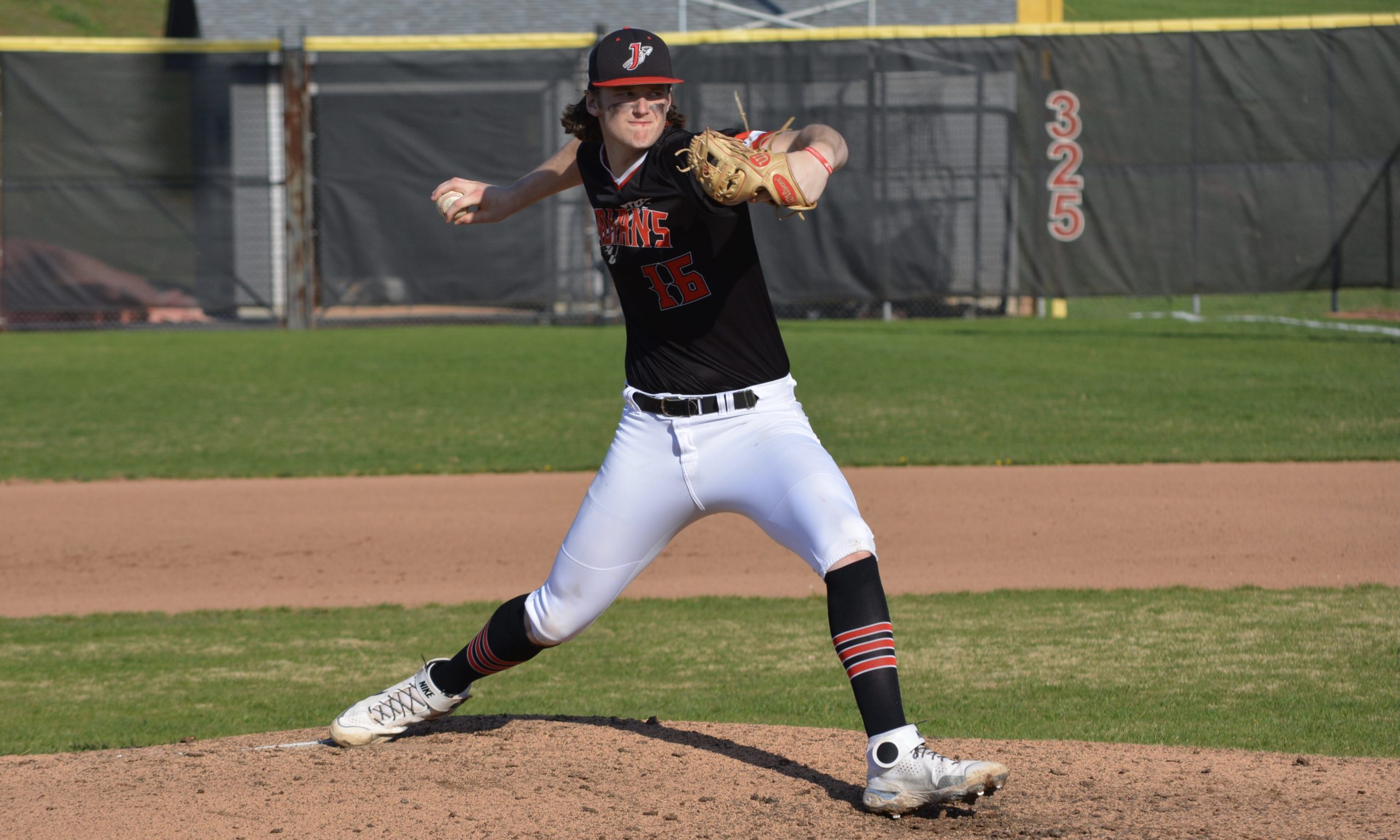 Junior Caden Bogenpohl was one of the five pitchers in Missouri named to the Class 6 All-State First Team by the Missouri High School Baseball Coaches Association. Photo by Jay Forness

When Caden Bogenpohl checked out this year’s Class 6 All-State selections, he was a little shocked upon seeing his named under “First Team All-State Pitcher.”

This wasn’t because the Missouri State verbal commit isn’t talented on the mound, but more because Bogenpohl has always seen himself as more of a hitter. Following last spring, Caden was named second team all-state as an outfielder for the Indians.

What impressed Bogenpohl the most about being named first team all-state that he did so in Class 6, which is the highest classification of baseball in Missouri.

During the offseason, Caden worked with Cam Hatch in a program where “you do so wild stuff,” Bogenpohl explained, such as throwing weighted balls against the ground. Caden said this program cleaned up his pitching mechanics and taught him a slider he used all throughout the 2022 season.

Bogenpohl said he always strives to earn the highest honors achievable in whatever he does, and he certainly more than earned every accolade he received this spring.

On top of earning first team all-state, Caden was also named the SEMO Conference Pitcher of the Year after finishing with a perfect record of 8-0 on the mound. He also recorded a team-high 72 strikeouts while finishing with the best earned run average among the Indians starting pitchers with a 1.94.

Along with his slider, Bogenpohl delivered plenty of “heat” this spring with his two-seam and four-seam fastball. Caden has two more pitches outside of this as he adds in his curveball and changeup every now and then to keep batters guessing.

“I think that’s how I’m so effective by having four pitches — three that I can really throw strikes any time,” Bogenpohl said. “When I get in a rhythm throwing strikes, it’s really hard to hit me because if I’m hitting my spots, it’s going to be a tough day overall. I’m usually always around the strikezone, but when I’m just throwing strikes left and right, it’s going to be hard to get a barrel off on me.”

Caden stands at 6-foot-5, and this makes for a fairly imposing figure on the mound for players to face, especially when said pitcher is reaching speeds of 90 miles per hour.

“Obviously I’m a big guy, so I think I’m pretty intimidating up there,” Bogenpohl laughed. “I know batters have to be like, ‘Dang, this guy throws gas.’ I think it does play a big role with how tall I am, and that I’m going to Missouri State.

“I was pitching high 80s and sometimes touching 90, 91 MPH. High school batters usually don’t see that every day or hardly every month, so it’s definitely challenging for them as well.”

Missouri State first offered Bogenpohl to only be a batter, but he has since been told that he will be brought on as a pitcher as well for the Bears. Caden only pitched 6.2 innings his sophomore year at Jackson, but he threw more than 30 during his summer season.

While Caden was without a doubt one of the top pitchers in Missouri this season, he still faced what can only be described as elite talent throughout the season. Bogenpohl said there are around 40 players in his class in Missouri that are committed to playing at the Division-I level.

Bogenpohl is the first pitcher for Jackson to earn first team all-state honors since Tyler Martin back in 2018. Martin set two program pitching records that season with an overall record of 9-0 and a .77 ERA, while striking out 50 batters.

“I think our success at Jackson really just comes down to the coaches — we’ve had plenty of good ones in the past years,” Caden said. “First we had Bryan Austin and then Tatum Kitchen took over, and the assistant coaches have been great as well. Josh Meyer is our pitching coach, and Jim Brady always brought energy to practice and made us get better every day.

“It also comes down to the players wanting to get better and having a drive for the game of baseball. I just remember coming in and all of us being ready to get better every day and never having a down practice. I think that’s what really carried us.”

Offensively, Bogenpohl certainly made a case to be named all-state as an outfielder once again. He led the Indians in major offensive categories such as batting average (.405), home runs (seven), runs batted in (29), hits (30) and doubles (nine). Caden was also second in runs scored (28) as well as stolen bases (16).