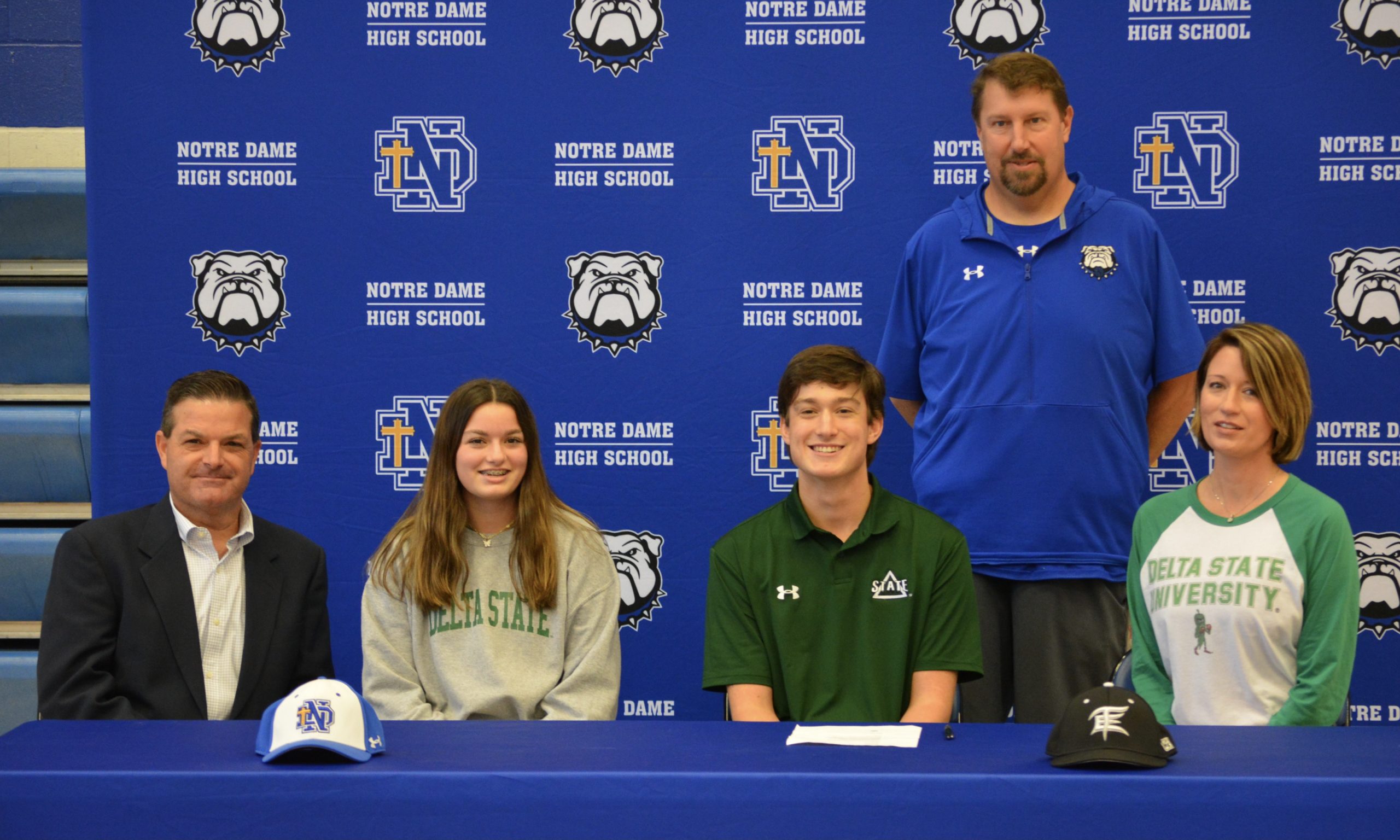 The one constant dream throughout Noah Gadberry’s life has been to do one thing, and that’s been to play baseball competitively after he graduates from high school.

Gadberry achieved this childhood dream when he officially signed with Division-II Delta State earlier this month, which is a program where Noah feels like he can contribute right off the bat.

“It’s been my dream my whole life to play college baseball,” Gadberry said. “With the program Delta State has and everything they offer for students and athletes, it means so much more to sign with them. I wanted to go somewhere I could play, and I feel like I can play there and help the team win.”

Gadberry’s dream of playing baseball at the next level entered his mind back when he first started playing the sport in second grade. This is because for him, playing baseball “is the dream.”

This dream certainly was not simply handed to Noah, though, as he’s endured many early mornings as well as staying after school to workout. Gadberry and his family also traveled to Atlanta every weekend this summer so he could play for Team Elite. This is something Gadberry has done for the past two summers and falls.

“Team Elite is one of the best programs in the country, and we emailed and sent them some video,” Gadberry said. “I tried out when I was 14, and I could name you three teammates that I had who are sure fire first-round draft picks.

“That has pushed me to be a better baseball player because it’s so easy to go through the motions. Whenever you go down there, you’re a little fish in a big pond. It makes you really strive to be the best you can be because you want to perform at that level.”

What Gadberry learned from those three players is that they always take things seriously every time they are on the diamond. “They have fun, but it just means so much more to them. I’ve learned a better work ethic and exercises I can do to improve my arm movement,” Gadberry said.

As for his career at Notre Dame, Gadberry has only pitched for the Bulldogs one season, which was last year when he went 4-3 overall with 55 strikeouts and a 3.63 earned run average. Notre Dame reached the Class 5 District 1 Championship game, but it fell to Festus 4-0 for the Bulldogs to come up short of winning their first district title since 2018.

However, Notre Dame and Noah didn’t get a chance to compete for a district title in 2020 like every other spring sport athlete since that year was cancelled because of the coronavirus pandemic. Prior to the pandemic, Gadberry actually attended Sikeston his freshman year.

“Coming in my sophomore year, I had known [Notre Dame head coach Jeff] Graviett my whole life,” Gadberry said. “He’s one of the best coaches Missouri has ever seen in baseball — has some of the highest accolades of anybody. I had high expectations my sophomore year, and then COVID happened.

“Last year meant so much more. The leadership he has and the way he coaches — everything he does – he’s a great coach. It means everything playing for him.”

What Gadberry enjoys the most about baseball is that it brings him ease because whenever he takes the mound, nothing else matters to him. He also thoroughly enjoys seeing his fellow classmates and teachers cheer him on.

Ever since he was little, Noah said that he has been able to throw harder than most players. That only got Gadberry so far until his competition matured with him and were used to seeing fast balls, so his work on off-speed pitches has been crucial to his success.

“My main thing I’ve worked on since I’ve been in high school is getting my off-speed pitches down and location,” Noah said. “You can throw really hard around here and succeed, but once you get to the next level if you miss your spots, they’re going to make you pay.

“That’s one of those things where I sat down and tell myself, ‘I have to give my best at every single pitch. I can’t take one pitch off.’ That’s what I live by.”

The pitches Gadberry has in his arsenal are the two-seam, fastball, changeup and slider. Noah said the slider is his go-to pitch whenever he needs a strike no matter the pitch count.

“For me, my favorite pitch depends on the day. One day, one is on, and I really utilize it, so I couldn’t tell you one I like the most,” Gadberry laughed.

On the rare occasion when Gadberry isn’t playing the sport or working toward becoming a better baseball player, he will be majoring in business with a minor in law. Noah, who has several family members that practice law, plans on going to law school following his playing days at Delta State.

“It’s just something that I’ve always wanted to do,” Gadberry said. “Just like playing college baseball — I’ve always known that I wanted to go into that type of study.”