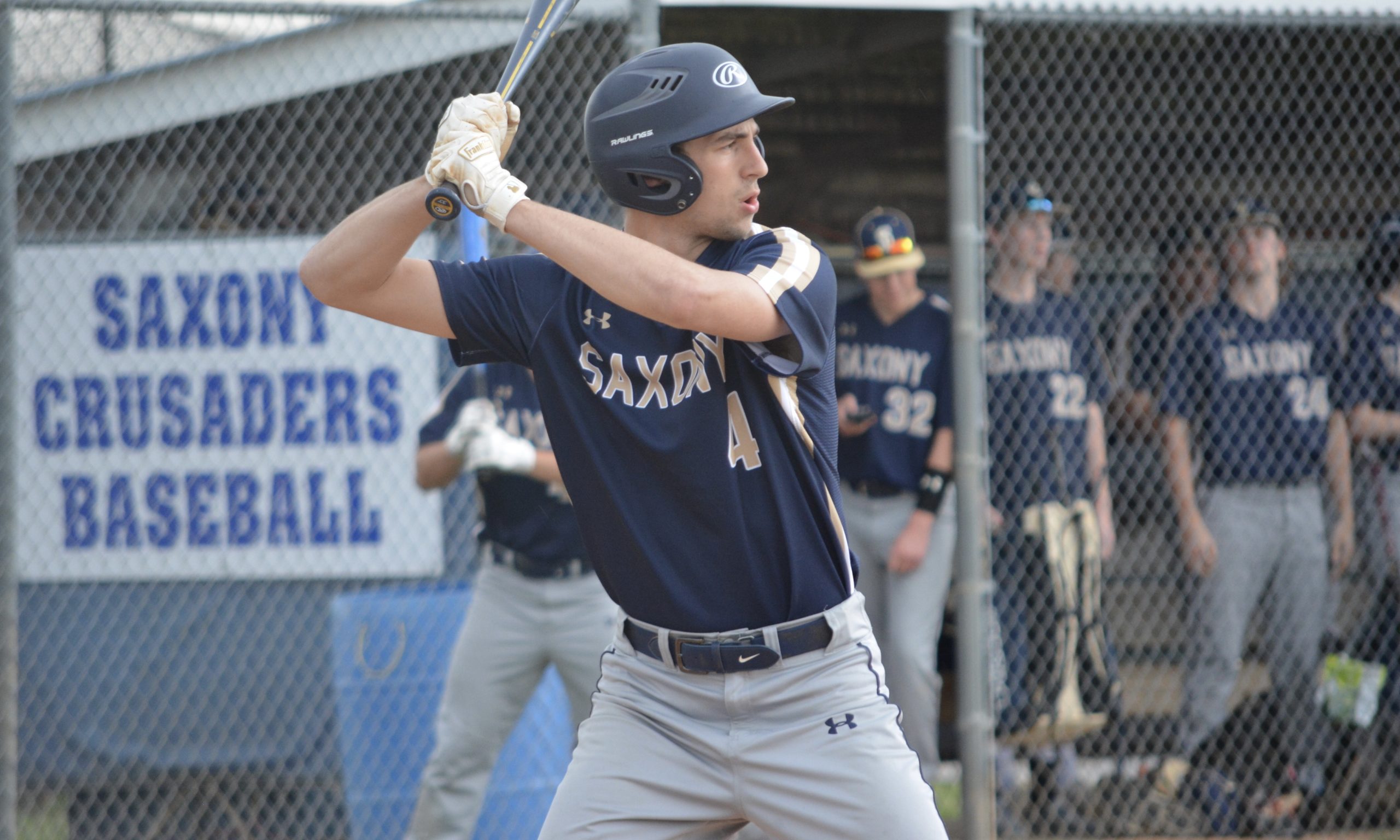 Senior Wilson Lodge returns as one of Saxony Lutheran's starters this season. Photo by Jay Forness

Even more impressively, though, Brown and LeDure each had earned run averages below one as Eli finished with a 0.16 and Will at 0.35. While King didn’t finish with an ERA under one, he still recorded a 1.18.

“We had two of the best pitchers in Missouri with Brown and King — in any Class,” Saxony’s longtime head coach Paul Sander said. “As I’ve told people, they don’t live here anymore.”

Despite losing those three-standout pitchers, the Crusaders will return one of their starters in senior Wilson Lodge. Lodge, who will likely serve as Saxony’s ace this spring, produced an overall record of 3-1 with 29 Ks and an ERA of 1.02 during his junior campaign.

“I like Lodge period. He’s a great kid and great human being,” Coach Sander said. “He’s a controlled-type pitcher — he’s going to throw strikes, and he’s going to be able to go deep in games. We know out of him he’s got a nice curveball and good location.”

Even though Saxony was nothing short of dominant on the mound last spring, the Crusaders fell short of winning what would’ve been their second-straight district championship. Saxony’s season indeed ended in the Class 3 District 2 title game at the hands of Kelly by only two runs at 4-2.

The past is the past, though, and Coach Sander is excited about the starters returning to Saxony and is hopeful about the pitching staff because of the depth at the position. The only problem is that outside of Lodge, the rest of the pitchers are unproven.

One pitcher the Crusaders will be relying on heavily to fill a starting role is senior lefthander Mason Mayhew. Even though he isn’t overpowering on the mound, Coach Sander said Mayhew has a lot of pitches in his arsenal and spots the ball well.

“He throws a number of different off-speed pitches for strikes, so we’re hoping as a senior he’s able to step into that role of maybe being our No. 2 guy,” Sander said. “It’s his to earn, and he’s paid his dues.”

Fellow senior Colin Tarry, who only pitched 4.1 innings last spring, is another player Coach Sander is hopeful to step up at the mound this season. “He’s worked really hard over the winter and has matured a lot physically,” Sander said.

Tarry will also return to the middle infield for Saxony after batting .263 and producing 15 runs, 10 hits and nine RBIs. Tarry along with Lodge and Mayhew were named the three team captains for the Crusaders this season.

Tarry has already signed on to play college baseball as he inked with McKendree earlier this month.

“The captains are the guys you go to if you had a problem, or they are the guys you would go ask for a ride home,” Coach Sander explained. “Lodge is a tremendous young leader. Mason Mayhew is just a quality young guy. They each have specific duties that they are responsible for.

“They’re the guys who lead the team in a positive manner. They’re all seniors, and that helps a lot when you’ve got guys people look up to.”

Another option at pitcher for the Crusaders is sophomore Mason Landewee, whom Coach Sander said has a true knuckleball. In the 17 years Sander has been the head coach at Saxony, he said Landewee is only the second player who’s ever been able to do that.

“This kid’s knuckleball is the real deal, so he will throw the knuckleball most of the time,” Coach Sander said. “If he can throw that for strikes and mix in the fastball, we’re hoping he can give us quality innings as an underclassman.”

Moving to defense, Tarry will likely move to shortstop to fill the hole left by King, who was a two-time all-state recipient for Saxony. Tarry should fill a spot in the middle of the order, as junior Jace Boland will take over at second base and likley leadoff for Saxony.

Even though he only had 12 appearances at the plate last spring, Boland finished with a .375 batting average, scored 10 runs, drove in four and had three hits. Sander stresses that if players can hit, they will find themselves a spot in the lineup.

Having already secured a spot and returning as one of the Crusaders starting outfielders will be senior Hunter Hamilton, who also signed with McKendree back when Tarry did. He will likely bat second in the order after producing a .324 BA, led Saxony in hits with 23 and tied for a team-high 26 runs with King. He also had 14 RBIs.

Batting third in Saxony’s lineup is going to be senior center fielder Zach Lewis, who hit a .241 with a team-high 19 RBIs. Lewis also produced 13 hits and scored 12 runs, while he had a fielding percentage of .923.

Behind Lewis at the clean-up spot will likely be senior Jacob Johnson, who is going to be Saxony’s utility player this season. He will start out in the outfield, but he will also see time at second base, catcher and even pitcher.

Behind Tarry in the sixth spot should be junior catcher Carson Birk, who only recorded one error the entire season last spring. At the plate, Birk finished with a BA of .321, nine hits, 11 RBIs and scored nine runs.

Currently there is a battle at first base between juniors Aaron Eubanks and Drew Hahs, while sophomore Nolan Hale could bat himself into the starting lineup and at third base.

“If you can hit consistently, we will find a place for you to play,” Sander said. “With the guys returning and the new guys moving up, we feel like we’ll be able to score some runs.”