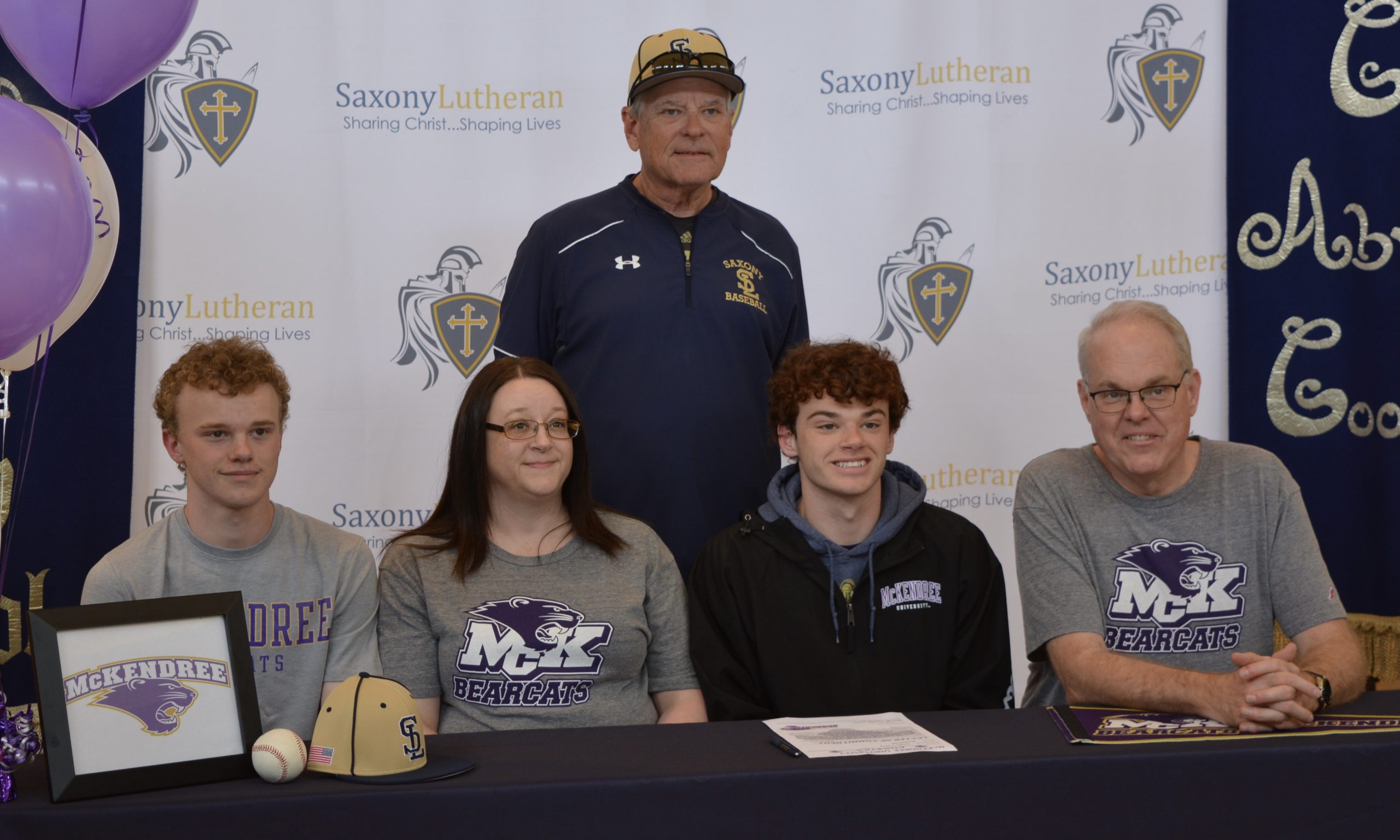 When Colin Tarry signed his national letter of intent with McKendree to play college baseball, it was nothing short of a surreal moment for the Saxony Lutheran senior. Like nearly every kid does, Tarry started playing the sport at a very young age, but his love for the game led him to take things to another level.

“There have been struggles because baseball is a sport where you have to learn to fail in order to succeed,” Tarry said. “Stepping out there and putting on my cleats every time — just walking out there — that’s what brings the love of the game for me.”

Tarry, who also played soccer along with baseball, describes himself as an extremely competitive individual. Colin said baseball brings out the competitive nature in him.

“It brings it out in me because I’m a pitcher, and I have to face everybody,” Tarry said. “I want to be the best and strike everybody out, so I do the best I can.”

Tarry also, of course, enjoys the friendships he’s made through baseball, and he will actually be playing at McKendree with his best friend and current Saxony teammate Hunter Hamilton. Tarry and Hamilton both went to a showcase hosted at McKendree in October.

The coaching staff was so impressed with Tarry and Hamilton that they had them come on a visit not too long after the showcase, which was when they officially offered them both.

“McKendree has a beautiful campus, and I really loved their field,” Tarry said. “All the coaches were very, very nice when they reached out to us. They made sure that we got what we wanted with their school.”

Tarry and Hamilton have known and played baseball together ever since sixth grade when they played in the Cape Girardeau Recreation League. Outside of playing together at Saxony, Tarry and Hamilton were teammates in Cape Legion this past summer and with the East Coast Sox in Mississippi this fall.

“I consider Hunter to be my bestfriend, so that’s incredible that we’re going to play at McKendree together,” Tarry said. “And we’re roommates, so it’s just going to be a great time. I’m really looking forward to it.

“He’s just kind of a goofy kid, and he loves the game and plays with passion. He brings that out in me, too, whenever I play with him.”

At McKendree, the Crusaders current starting shortstop Tarry will focus on playing in the infield. He took over the position this spring for Saxony’s former two-time all-state shortstop and 2021 graduate Tanner King.

Currently, Tarry is one of Saxony’s three starters with a .400 batting average as he currently sits right at that mark through eight games. He leads the Crusaders with 10 hits, 10 runs scored and is tied for third in stolen bases with four.

“My mentality at the plate — I kind of have a different approach,” Tarry said. “The first strike that I see, I’m going to hit it. I don’t like to see pitches because I’ll get in my head and start thinking too much. Nothing good comes from that, so my mentality is just to pounce on the first thing and go with it.”

Defensively, Colin has only had two errors for a .867 fielding percentage while getting 12 runners out.

This spring, Tarry has also seen time on the mound as he’s pitched a total of 12 innings and has an overall record of 2-1. He’s recorded 16 strikeouts and an earned run average of 3.50.

Tarry said he will primarily focus on playing second base in college. “The position just comes natural to me.”

As for Tarry’s current head coach at Saxony Paul Sander, Colin said he’s one of the best coaches he’s ever played for. Tarry stated this is because all Sander does, who’s only ever had one season under .500 in his 13 years at Saxony, is win.

“Coach Sander builds the program on winning, and the program was nothing whenever he got here,” Tarry said. “He built this whole program, which is pretty special. To play for Saxony, you have to show up every day and give your best. We’re here to win — not for everybody just to get playing time.”

Besides being on the diamond, something that Tarry thoroughly enjoys about baseball is being in the dugout during games.

“That’s probably what’s most fun is just talking to the guys. I know for a fact those guys out there are going to be my lifelong friends,” Tarry said. “What makes me love the game is the relationships I get to build.”

Playing college baseball first became a dream for Terry his freshman year at Saxony because of the players he witnessed signing to play at the next level. “You think, ‘I want to do that. I want to be there,’” Tarry said.

While there is much relief for high school athletes when they sign with a college program because the search is over, the motivation to become even better at their craft then settles in, Tarry said.

“Now that everybody sees that I’ve signed, they’re going to hold me to an expectation, and I need to rise up to that,” Tarry explained. “It’s a little bit stressful, but I know I’ve got to do it.”