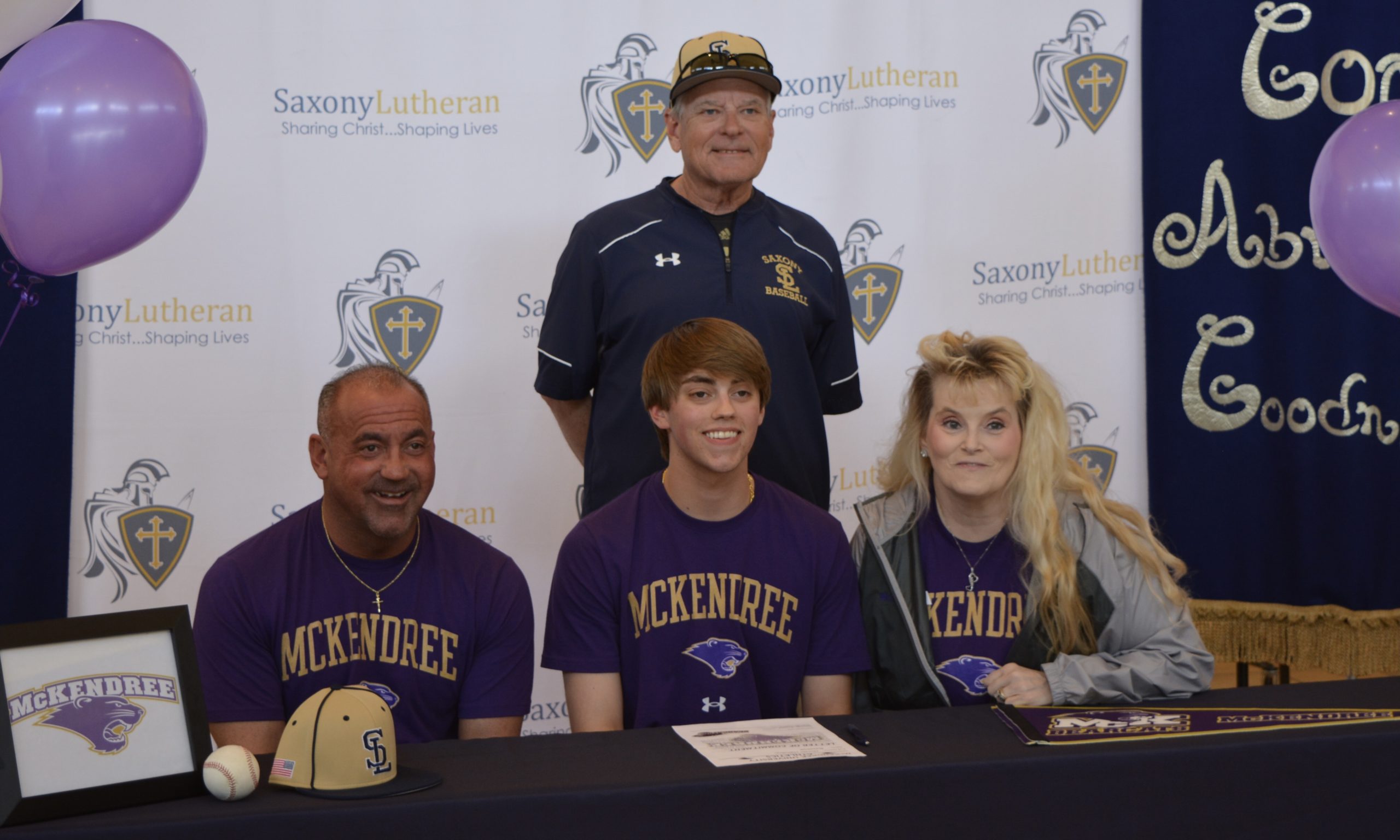 Hunter Hamilton’s love of baseball started like it did for most — by playing the sport with his father when he was growing up. However, a majority of players don’t make it to the next level, but this isn’t the case for the current Saxony Lutheran senior.

Last month, Hamilton officially signed a national letter of intent with Division-II McKendree prior to his final season of play with the Crusaders. Hunter was selected to the Class 3 District 2 All-District Team in his first year as a starter last season.

“Being able to go to college to play baseball is basically a dream come true for me,” Hamilton said. “Growing and playing baseball for nearly my entire life — watching MLB — and practicing and working hard turns out good for you.”

Playing college baseball didn’t become a dream of Hamilton’s until after he started attending exposure camps. This opened Hunter’s eyes to the fact that he had what it took to play at the college ranks.

“I would get all of these letters from colleges saying, ‘Hey, come to this camp and come to that camp,’” Hamilton recalled. “I wasn’t sure at first but then I told my dad, ‘I want to try it out.’ I went to all these camps and started seeing what life was like on a college field.

“That’s also where I started talking to coaches and it kind of just set into me, ‘I actually want to go play college baseball. If I’m going to train this hard, why not try to go to the next level?’”

Attending a high school showcase was how Hamilton first met the coaching staff at McKendree. Hunter’s current Saxony and future college teammate Colin Tarry attended the camp with him.

“Tarry and I went up there thinking it was just another showcase,” Hamilton remembered. “We both did really well — our swinging, fielding and timing for running were all good. After we left, I told Colin, ‘I kind of like this place. I like how the field is.’

“Everyone was really nice at McKendree, and a couple days later I got an email saying they’re interested in me. It’s crazy how anything can happen because it was a snap in reality getting an offer to go play college baseball.”

Hunter said that he and Hamilton have been friends for quite a while and, of course, played baseball together growing up. The two were also on the same soccer team when they were little.

“Getting to continue to play with Colin in college means a lot,” Hamilton said. “We’re even going to be roommates at McKendree, and that’s just special. That’s definitely a dream to playing baseball together with your best friend. We’re just always positive around each other and trying to help the other one out.”

Hamilton at first was a fan of watching golf until his father, who played baseball and slow-pitch softball, influenced him to start swinging a baseball bat. Ever since he first started hitting off the tee, Hamilton “felt good.”

Currently as Saxony’s cleanup hitter, Hamilton has a batting average of .320 off eight hits with three of them being doubles. Hunter is third right now for the Crusaders in runs batted in at eight and has scored six individual runs of his own.

“What’s been key for me is having a good mindset, staying positive and keeping on doing the work,” Hamilton said. “I try to stay positive and just be relaxed. Before I was always nervous, but you just have to have confidence. Now I know I can step in the batter’s box and be confident to where I have the feeling, ‘I’m going to get a hit.’”

Last season in his all-district campaign when he was Saxony’s leadoff hitter, Hamilton recorded a .324 batting average, 26 runs scored, 23 hits and 14 RBIs.

“I remember even all the way back to grade school, I would go hit twice a week just for fun,” Hamilton said. “In my freshman year, the fun was still there, but I wanted to train better and get better to go play college baseball somewhere.

“Something in me just clicked, so I wanted to go hit more, lift more and do anything I can to try to play college baseball. My mindset has been to work hard everyday and put in the effort and energy to be the best I can be. It’s really paid off for me.”

Over the past two seasons, Hamilton has started in the outfield for the Crusaders. Hunter was actually an infielder up until his sophomore year, which was when he “fell in love” with playing as an outfielder.

Hamilton has only suffered one error this season while having only two in the outfield last spring. Hunter’s work ethic has been the key.

“I wasn’t as big of a fielder whenever I first started playing baseball,” Hamilton said. “During my sophomore year, I started training everyday working on catching fly balls and making diving catches.”