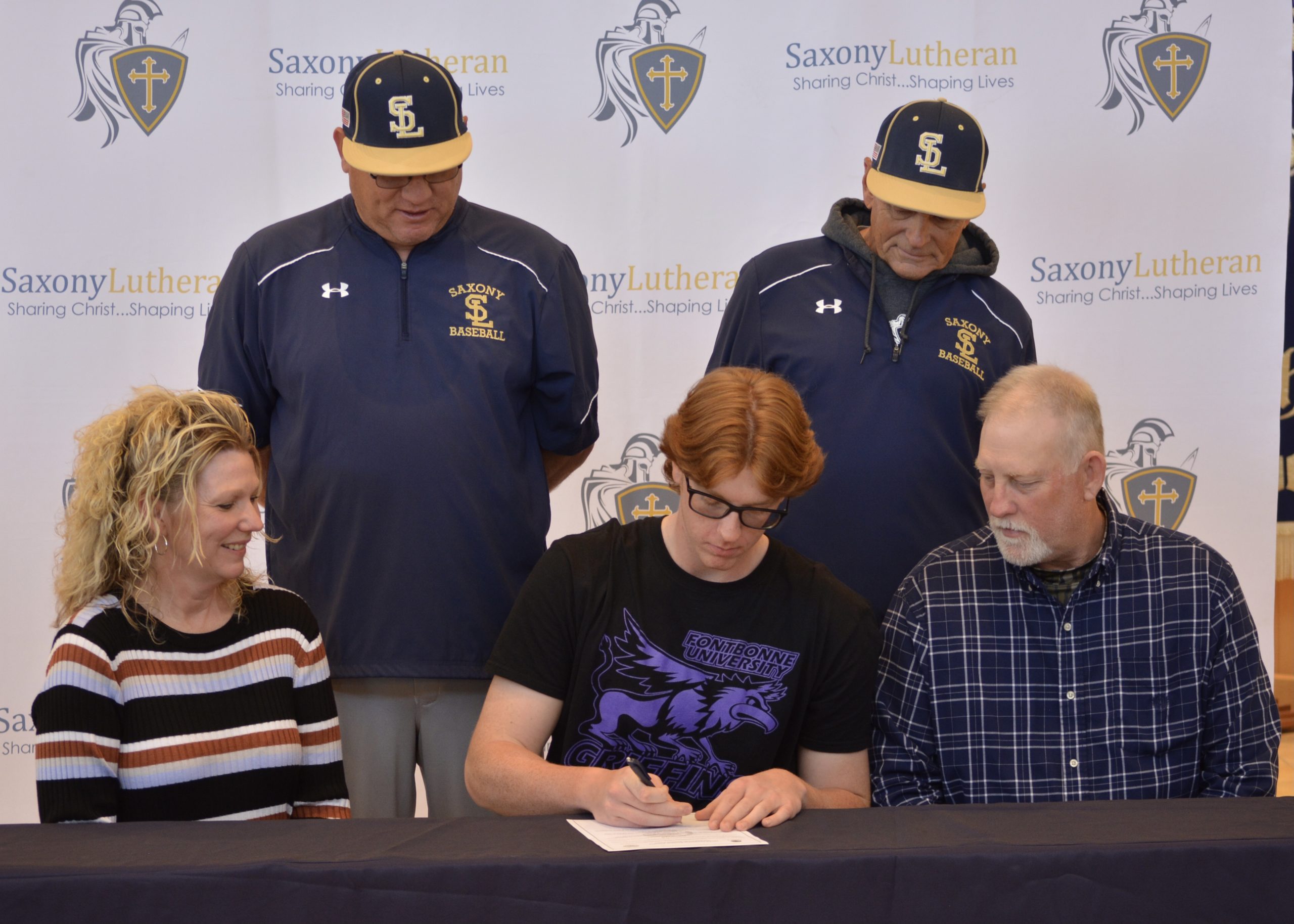 Saxony Lutheran senior Will LeDure officially signed his national letter of intent with Fontbonne University to continue his baseball career on April 22. Photo by Jay Forness

Saxony Lutheran senior Will LeDure has been playing baseball since he was four-years-old, and his career on the diamond won’t come to an end after his time with the Crusaders baseball team.

On April 22, LeDure officially signed his national letter of intent with Fontbonne University to continue doing the one thing he always wants to do, which is play baseball.

“I just want to play it every single day,” LeDure said. “When I’m bored, that’s what I want to do. Going to college and being able to continue to do that is just great for me.”

LeDure has established himself as Saxony’s starting first baseman and is also third in the Crusaders pitching rotation. On the mound, Will is currently 3-0 overall with 24 strikeouts and an earned run average of 0.58, while holding a batting average of .364 with 16 hits and has scored 13 runs offensively.

Saxony is ranked as the second best team in Class 3 right now by the MHSBCA with a record of 15-1. The Crusaders made the Class 3 Final Four for the first time in program history LeDure’s sophomore year when he served as the team’s designated hitter.

What LeDure enjoys the most about baseball is all the friends he’s been able to make over the years while being heavily involved in the sport by playing not only school ball but on travel and summer teams as well.

LeDure said the reason why he loves playing at Saxony is because of head coach Paul Sander and assistant coach Mark Lewis. “They do a great job here and work with us year round. I just love it here — the atmosphere of the school and all the fans we have for our baseball club.”

The two pitchers ahead of LeDure in the Crusaders rotation, Eli Brown and Tanner King, signed the same day Will did with Lindenwood. Brown currently has a record of 5-0 with a 0.0 ERA as King is 4-1 with a 1.00 ERA. Brown leads Saxony in Ks with 55 as King paces him with 46.

“There’s quite a few seniors on the team this year,” LeDure said. “We all get along together and have been in this club for four years. We’ve bonded pretty well and the whole class gets along.”

When LeDure isn’t on the diamond at Fontbonne, he will be focusing on becoming a lawyer. Will said the reason why he wants to became a lawyer is because, “I’m good at arguing. It’s a long road and lot of work, but it seems like it would be fun.”