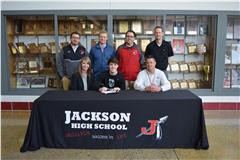 Link Year is a nine-month foundational biblical school, which is designed to build a “solid foundation within each student.”

Harris said it was a relief to have signed with Link Year because it means all of the work he has put in up to this point has paid off.

Link Year is a nine-month school, so Harris hopes his one year of playing there will help him achieve his ultimate goal of playing at the Division I level.

He also hopes he will mature more along the way.

“[I’m going to work on] definitely getting stronger and my all-around game,” Harris said. “Offensively, I’m pretty gifted, so just all the little things I guess.”

Harris started playing the game of basketball when he was six-years-old, but it wasn’t until after his sophomore season he realized he had the potential to play in college. This is when he had a growth spurt that inspired him to start focusing more on basketball.

Harris was one of the four Indians to earn Class 5 District 1 All-District honors this season as he averaged a team-high 16.2 points through 27 games.

He also held a 3-point shooting percentage of 39 while hitting 81 percent of his free throws.

Jackson failed to win its sixth-straight district championship to advance to the state playoffs, but Harris said he wouldn’t trade his final year at Jackson for anything.

This was also the last season he would be coached by Jackson head coach Darrin Scott, who Harris said has taught him about more than just basketball.

“Coach Scott is an unbelievable coach, so he taught me so many things — more than just basketball,” Harris said. “[He taught me how] to be a leader and just about being a man. There was more I took away off the basketball court than on it, but on the court he’s a really good coach.”

This was vital for Harris since being a point guard means you are leading your team offensively. This is an area where Harris excels.

“I always try and facilitate, and if the team needed me to score I would do that,” Harris said. “I just — I want to win more than anything, so I just try to do everything I can to win.”