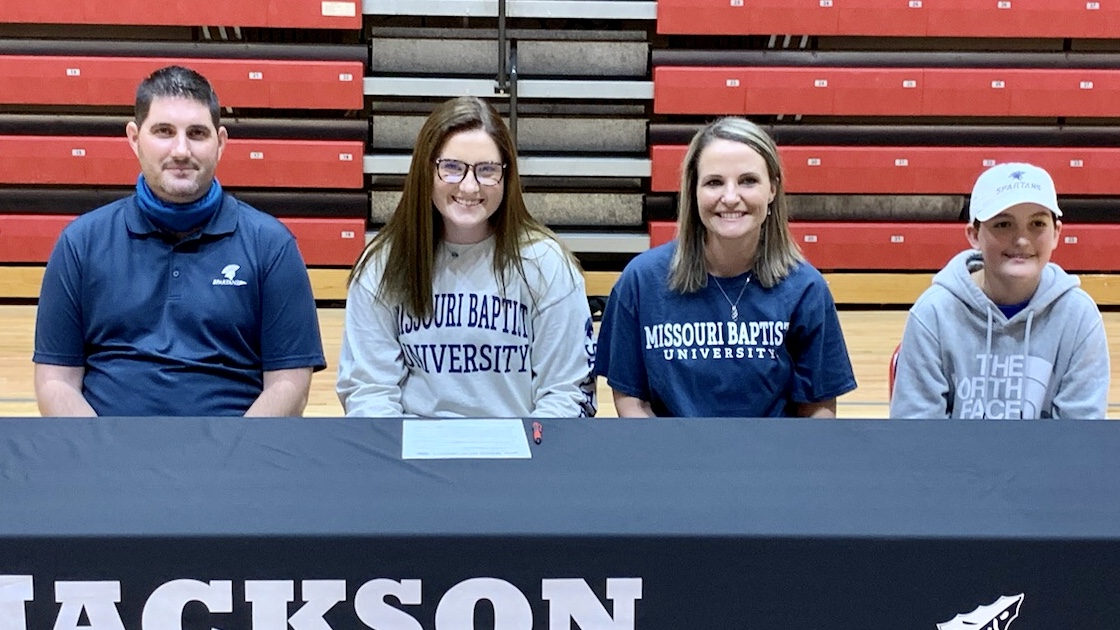 The first time Madison Lambert dreamed of playing college basketball was in the fourth grade as a member of a travel team when she would play games in St. Louis. Fast forward to 2021, and the Jackson senior has already achieved this childhood dream as she officially signed with Missouri Baptist out of the NAIA in December.

Lambert wanted the school she signed with to be her “home away from home,” and she said the culture at Missouri Baptist is what ultimately made her want to become a Spartan. Also, even though Lambert will tell you she’s the furthest thing from  a “home body,” she wanted to stay close to home because of her parents.

“I loved Reinhardt in Georgia — it was a beautiful campus and the coaches were nice, but it was also kind of far away from my parents,” Lambert said. “Staying close to home wasn’t a big deal for me, but I knew it meant a lot to them.

“When I visited Missouri Baptist, I remember just being like, ‘Wow, I really like it here.’ I practiced with their varsity squad, and it was so cool because I got a little bit of experience. I love coaches Samuel Pearson and Stephen Allen — they were the sweetest people ever and good to have conversations with.”

Besides the feeling of playing basketball at a high level, Lambert fell in love with the sport while bonding and training with her father growing up. Lambert also spent plenty of time with her mom through the sport since she was the one who traveled with her to all of the AAU games.

Lambert is the type of person who is always challenging herself and setting new goals, so another reason why she loves basketball is because there’s something new to learn all the time.

What Lambert loves the most about the sport, though, is the people she has met while playing it. Lambert said she has been best friends with her fellow seniors on this year’s team since third grade.

Lambert has always been one of the bigger players in her class at Jackson and primarily played in the post until high school. Thankfully, Lambert’s father was a post player when he was in high school, so she was able to learn a lot of moves to use in the paint from him early on.

When Lambert asked her current head coach Tyler Abernathy what it would take to play varsity as an underclassman before the summer of her freshman year, he told her to “learn to shoot it.”

“From spring to summer, that’s all I did was shoot — I shot all the time,” Lambert said. “I was basically taking what I knew from 15 foot and the post and trying to transition out there. I had trainers along the way teaching me moves and stuff, but it was really [Coach Abernathy] telling me, ‘If you want to play varsity, you have to shoot it.’ I was like, ‘OK, I can do that.’”

Lambert made a name for herself as an underclassman for the Indians, especially her sophomore year when she helped Jackson win the SEMO Conference Tournament, Regular Season and Class 5 District 1 Championships as a member of the starting five. Instead of playing in the post, Lambert was a wing throughout her first two years of high school.

As a freshman, Lambert played in all 26 games and finished as Jackson’s second-leading 3-point shooter with 29 makes from beyond the arc. Lambert also managed to be the third-leading scorer with 5.8 points per game behind former Indians Kalli Mayfield (13.8 PPG) and Mikala Liley (10.3).

Moving on to her sophomore campaign, Lambert became Jackson’s top 3-point shooter with 46 triples as she improved her freshman percentage of 27% to 35%. Lambert was the team’s fourth-leading scorer with 7.9 PPG since Alexis Allstun returned to the court with Liley and Mayfield after tearing her ACL the year before.

Lambert will be teammates with Allstun once again since Alexis signed with Missouri Baptist back in 2019. In her freshman season with the Spartans, Allstun earned all-conference honors and broke the program’s single-game rebounds record.

Current Jackson junior Jordyn “Jo” McClellan was in the starting five with Lambert in the 2018-19 season, but McClellan ended up missing last season due to tearing her ACL during summer basketball. This made Lambert the only returning starter for Jackson’s 2019-20 campaign, where she finished as the leader in points (16.2 PPG), rebounds (6.6 RPG) and threes (60) with a 38.5% 3-point shooting percentage.

Lambert also made the return of being a post player since Allstun graduated, and she remembers telling her dad about it, to which he replied, “Guess we’re going to practice.” All it took for Lambert to make the adjustment was refining the skills she already possessed.

Standing at 5-foot-10, Lambert will move back out to play wing in college, but she knows the moves she’s learned as a post player will also help her against smaller guards.

“My junior year was quite different because I had all of those other leaders before me, so it was a learning period,” Lambert explained. “Instead of being a leader, I needed to be more of a role model for the other girls. It’s hard to be like, ‘Do this and do that’ because these are all my best friends, and we’re all in the same grade. It was more of like showing them and showing what it takes to be a starter on the varsity level.”

The Indians failed to win what would’ve been a fourth-straight district championship last winter, but Jackson is posed for a postseason run with Lambert back for her last ride along with other returning starters like McClellan and Ward.

Jackson is currently 8-4 overall as Lambert is the second-leading scorer right now with 11 points per game behind McClellan’s average of 14.9. McClellan also leads the team in 3-pointers with 35 as Lambert has 10 through seven games since she missed the first five after testing positive for COVID-19.

Without Lambert, the Indians went 3-2 with losses to Class 5 Notre Dame, 46-33, in the conference tournament title game and Class 4 New Madrid County Central, 63-60, in the season opener. Now Jackson is 5-2 with Lambert as it only lost to Notre Dame by eight points, 40-32, in the Holiday Classic final.

“I have never sat out before, and I have never missed a game or practice until I had COVID,” Lambert said. “I remembered the first game back I was so tired, but when it was time for the Christmas tournament I was like, ‘I’m ready! Let’s go and win this thing.’

“I know we lost by eight, but Notre Dame had free throws at the end. If we didn’t have to foul, I think it would’ve been different. I’ve told my team, ‘Guys, we are good. We are meshing — we are doing great things.’ When we play hard, we’re really good, and I think we can go far this year.”

Lambert is currently working on shooting off the dribble because in college there won’t be as many catch-and-shoot threes like there are in high school. During this summer, Lambert spoke with former Southeast Missouri State guard and 2020 Ohio Valley Conference Tournament Champion Carrie Shephard about shooting.

With the Redhawks last winter, Shephard averaged 16.6 points per game and made 96 3-pointers (40.2%) while helping SEMO finish with a winning record for the first time in 12 years.

Off the court at Missouri Baptist, Lambert will major in education to continue her mom’s side of the family’s tradition of teaching.