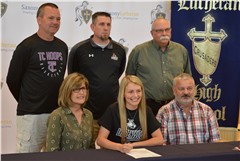 After playing basketball for two seasons at Saxony Lutheran, senior Macey Smith fulfilled her lifelong dream by signing a national letter of intent last week to play in college.

Her two older sisters, Taylor and Shea, each played college basketball before her, so doing the same has always been one of her goals.

Smith officially signed with Lindenwood Belleville, where she will be joining former AAU teammate and Crusader Brianna Mueller. Smith also played several games at the school during her time in AAU, and ultimately she felt like it was the best fit for her.

Smith first started playing AAU in middle school when she attended Delta. However, Smith decided to transfer from Delta to Saxony following her sophomore year.

This was two years after Mueller helped lead the Crusaders to the Class 3 State Championship game, where Saxony fell to Strafford 50-46. Strafford went on to win three more state championships, but the Crusaders continued their success as well by winning a fifth-straight district title the next season.

Smith said it was a difficult transition to make moving to Saxony, but she said her teammates eventually made things easy for her.

Smith was unable to play until January of her junior year due to transfer rules, but the Crusaders were able to win a sixth-straight district championship and reach the quarterfinals with an overall record of 25-5.

Coming off the bench in 17 games for Saxony that year, Smith averaged 2.2 points per game and finished 38% from 3-point range. She scored five points and recorded a steal in the district title game.

Heading into Smith’s senior year after Saxony only returned one starter, she said there were questions surrounding the program.

“I feel like a lot of people doubted us because we lost so many people,” Smith said. “We just all worked really hard the upcoming summer, and we were ready to prove people wrong.”

Proving people wrong is exactly what Smith and the rest of the Crusaders did by winning districts for a seventh consecutive year. Smith also garnered all-district honors following the tournament.

The Crusaders finished one game shy of reaching the Class 3 Final Four by falling to Licking in the quarterfinals, but they still finished with 20-plus wins for the seventh year in a row. Smith scored a team-high 18 points off four 3-pointers with six rebounds in the final game of her high school career.

Smith finished with an average 7.3 points, 3.5 assists, 2.1 assists and 1.9 steals per game. Earlier this season, she also helped Saxony win the First State Community Bank Holiday Classic for a second-straight year by beating Notre Dame for the title. She was also named to the all-tournament team.

“It’s been a blessing to play here, and I’ve enjoyed every minute of it,” Smith said. “I’m just so blessed that I got to have this opportunity.”

Smith extends the streak for Saxony’s girls basketball program of having a senior continue their career in college, following the footsteps of former Crusaders like Mueller, Addison Beussink and Masyn McWilliams.

Mueller is now the all-time leading scorer for Lindenwood Belleville after three seasons, while Beussink and McWilliams each garnered postseason honors in their first year.

At the helm of the program for the Crusaders is none other than eight-year head coach Sam Sides, who was thankful Smith moved to Saxony.

“The first time I watched her play was in a JV tournament, and you could tell then she had a lot of fight in her,” Coach Sides said. “I appreciate as a coach the kind of fire a player has — you can read their body language, and she has that. She became a very competitive player and has been a big part of our success since she’s been here.”

Smith will study education while she’s not on the court in college because, “I’ve always felt like I’ve wanted to be a teacher, and I had good teachers in the past.”