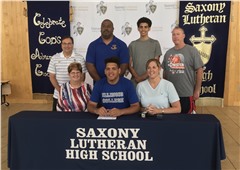 “It’s just been a dream I’ve always had to keep playing basketball for as long as I can,” Robinson said. “So for it to now come true in fruition is really cool for that to happen.”

Thinking back to the day Robinson woke up after his heart stopped, he remembers being told he may never be able to play basketball again.

He was eventually cleared to play, but Robinson still wasn’t able to do any physical activity for two months. He said it took a lot of faith and mental toughness to never give up while also continuing to push himself to make a comeback possible.

Robinson’s now former head coach Kevin Williams said he was invaluable to Saxony and even now during summer workouts the team is feeling his absence.

“We could make a lot of mistakes and we could just funnel you to a 6-foot-9, 300-pound kid and it was tough to score,” Williams said. “With his story and what happened to him I think it’s remarkable he’s even alive No. 1 much less was able to come back and have a good enough year to get a college scholarship.

“My hats off to him and I hope he embraces a second lease on life and attacks this opportunity because the sky is the limit for him.”

Robinson helped lead Saxony to a second-straight Class 3 District 2 Championship as the team’s center this season, where he averaged 13.2 points, 7.5 rebounds and 1.7 assists per game. He also shot 58.6 percent from the field and 66.7 percent from the free-throw line.

He was named to the all-district team along with fellow seniors Jalen Williams and Paiton Miller, who all helped lead Saxony to its winningest season in program history with a record of 26-4 last season.

“[Those are] memories I’m never going to forget,” Robinson said. “This is the funnest three years I have ever had in my life while making new relationships with my brothers and everyone. Winning back-to-back district titles and have the most winningest three-straight seasons in Saxony history is a real honor. [Playing here] is something I’m really going to miss.”

When Williams first started coaching Robinson, he said Robinson wasn’t well versed in the post with his footwork and that he also didn’t have a lot of go-to moves.

“[Robinson] was just a big body who could get a rebound and put it back in, but the more he worked he got really, really good with his back to the basket,” Williams said. “His footwork is good and his shooting has improved to where he’s a great free-throw shooter for a big man. That’s going to pay off for [Illinois] because when he gets hit and either finishes or doesn’t finish, he can go to the line and knock in some points.”

Robinson said he signed with Illinois because it felt like a “homey place” where he would like to be.

Robinson said when he first met with the team’s head coach Steve Schweer, who took the job in April, he was able to form a quick bond with him.

There were plenty of other offers on the table for the 6-foot-9 post player, which he admitted some as being hard to turn down. Ultimately, Robinson said he didn’t feel like those other schools were the right place for him.

Heading into college, Robinson wants to improve his overall playing ability as well as his stamina, but noted he is also there to get a degree and will be majoring in accounting.

Williams said being a college athlete isn’t just an extracurricular activity anymore but that it is a year-round job.

“There are expectations all the time whether you are in season or out of season, so you have to really love it to be able to do well at the next level,” Williams said. “[Coach Schweer] is hungry and is doing everything he can to bring in as much talent as he can and hit the ground running. I think [Illinois College] has a bright future.”

Illinois went 8-17 overall with a Midwest Conference record of 3-15 this past season.

During his time playing basketball at Saxony and in AAU, Robinson said he learned basketball is more than just a game. He said there are lessons you learn while playing like never giving up and pushing others to do well.

Robinson’s height gives him a lot of advantages on the court with the most obvious being able to reach further for rebounds. Another perk of being so tall is that Robinson is able to have full vision of the court so he can pass to an open shooter.

Robinson said his build is another advantage he has as a basketball player, which allows him to force his way through opponents.

All of these attributes helped lead him to being one of the best centers in southeast Missouri where he usually didn’t have to face a player taller than 6-foot-4.

This will change when he enters the college ranks.

“I’m going to go in prepared and ready because I know there’s not going to be any 5-foot-11 post players in college,” Robinson said. “I’m going to face a lot of people my height or maybe a little shorter, but I’m sure I’m going to face people taller than me.”

Another challenge most college students face that Robinson is looking forward to is living on his own and becoming an adult.

Robinson said he hopes whatever happens in college he can rebound off of for everything to go well.