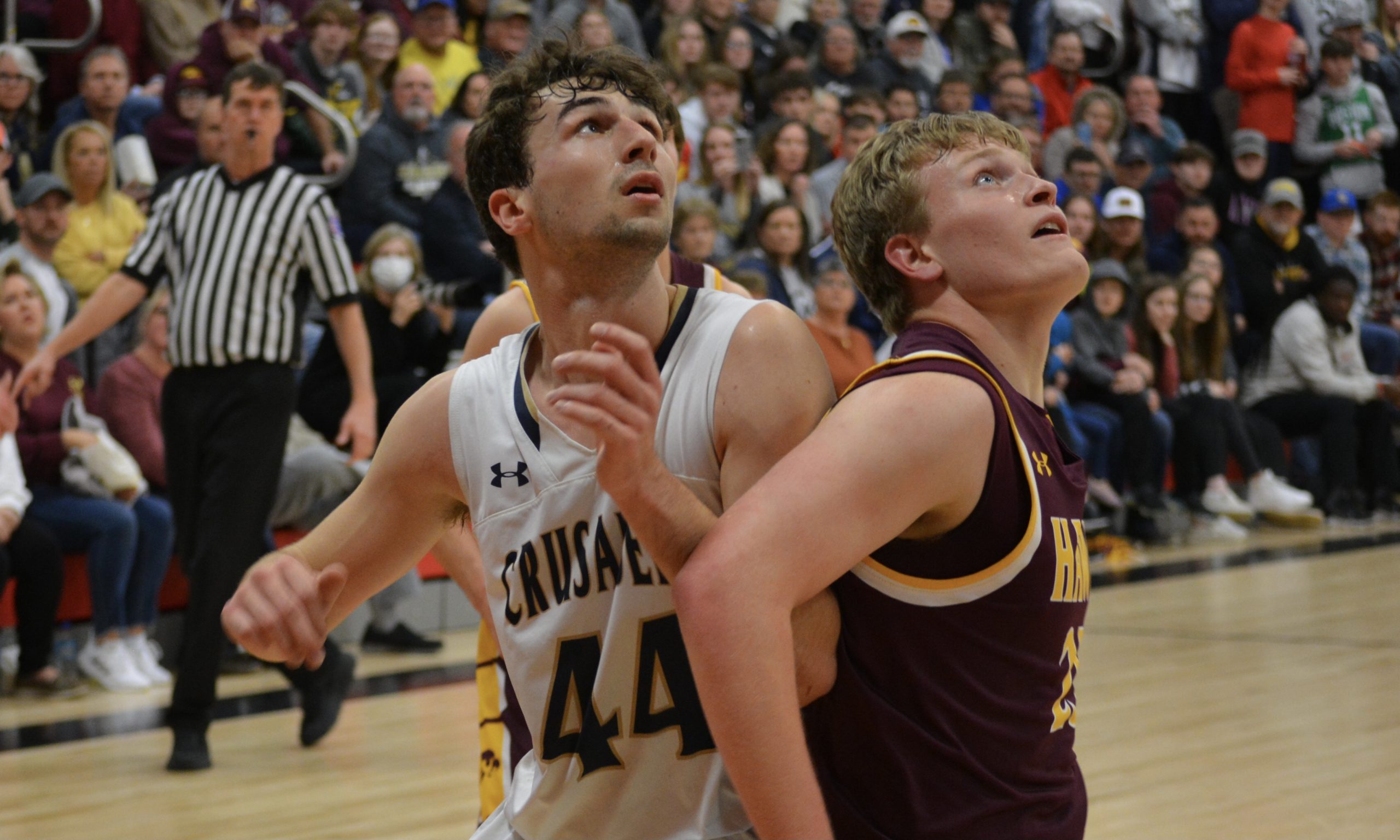 Last week, the Saxony Lutheran boys basketball team was able to reach the Class 3 District 2 Championship game for the second season in a row. The Crusaders were once again unable to come away with what would have been their first district title in four seasons, though.

However, it took more than four quarters for Saxony to fall as the No. 1 seeded Crusaders took a 36-31 lead over No. 2 Kelly with a little more than three minutes left in regulation.

Saxony’s defense held the Hawks scoreless for nearly seven minutes of the final frame, but Kelly senior guard Joel McClain came up clutch when the Hawks needed him. McClain went on a 5-0 run of his own to end the fourth quarter as he hit a 3-pointer to tie the game with 55 seconds left.

The Crusaders nearly broke this tie as junior guard Max Richey, who hit a buzzer-beating three to lead Saxony to a 51-48 win over Kelly in the regular season, took a short pull-up jumper with around five seconds remaining. Richey’s attempt bounced off the rim for the game to go into overtime.

There the Hawks outscored Saxony 15-8 in the four-minute overtime period for a 51-44 win as McClain produced eight of his team’s points. He finished with a game-high 25 points and hit three 3-pointers.

Saxony made it a four-point game with 18.3 seconds left in overtime, but the Crusaders had already forced too many fouls, which allowed Kelly to seal the game at the free-throw line.

“We knew this was going to be a lot of fun, and we were hoping to come out on top. It didn’t go our way,” Saxony head coach Justin Callahan said. “As far as the second half is concerned, we talked at half about what we could do better.

“Offensively, we stopped trying to run plays and just come down and play — run motion. Defensively, we tried the diamond and one. It worked for the first few trips, but we got kind of lucky.

Lodge, who will play basketball at Illinois College (Division-III) next winter, ended up with a team-high 13 points on top of his effort defensively. Wilson showed off his abilities as a rim protector by recording several blocks and didn’t give Jansen much room to work thanks to his smothering man-to-man defense.

“That was the game plan — to stop Gavin Jansen. You have to give McClain and Klipfel credit because they stepped up their game,” Coach Callahan said. “In the grand scheme of things with two minutes left, we had held them to 31 points. I mean, how could I ask for anything better than that? Jansen wouldn’t have been held to six points if it wasn’t for Wilson Lodge.”

Two other players for the Crusaders also ended up with double digits in the scoring column as sophomore forward Jon Hartmann knocked down four threes to come up with 12 points off the bench. Hartmann hit two of his threes in the fourth quarter, which propelled Saxony to its late 36-31 lead.

“Those threes were huge — John is a very good shooter,” Coach Callahan said. “Realistically, he’s probably our best 3-point shooter. He doesn’t have the highest percentage this season, but when you get down to it he’s our best 3-point shooter. He’s only a sophomore, so we’ve got him the next two years. He’s going to hit a lot more of those for us.”

Fellow sophomore forward Luke Eggemeyer paced Hartmann in scoring with 11 points of his own, but he only had six through the first four quarters.

Outside of those three, though, Saxony only produced eight points as senior guard Will Eldridge scored six and senior forward Logan Pruitt had two. The Crusaders fifth starter Richey failed to score at all, but he was also tasked with distributing the ball throughout the night.

Pacing McClain’s 25 points for Kelly was junior guard Drew Klipfel with eight points, while Jansen and senior forward Bryce Phelps each came up with six.

Saxony loses four of its top-nine players to graduation in Lodge, Eldridge, Pruitt and senior guard Wade Eggemeyer. “We lost to Charleston in the district title game last year, and that Thursday people were in the weight room getting ready for tonight,” Coach Callahan said. “It paid off. It’s just frustrating because we came up a little bit short.”

The Crusaders will return two starters next season — Luke Eggemeyer and Richey — from a team that had 19 wins for a program that only won a combined 20 contests the last three years. Hartmann will also likely move into a full-time starting role.

“This hurts because those kids worked so hard to get here, and they had a district title right there in the palm of their hand,” Coach Callahan said. “The seniors only had two wins their freshman year and then bumped it up to 10 wins as sophomores. Then last year they won eight, but we didn’t play as many games because of COVID. Then this year we had 19 wins, so it was pretty cool.”

“Our junior varsity team struggled as a group, but Bohnert and Gaebler had nice years individually,” Coach Callahan said. “Landon Ochs has done some really good things for us, and he’s the most athletic kid we have. Zoellner will be a force to be reckoned with inside.”