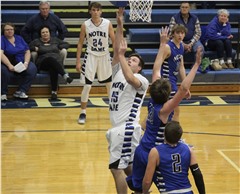 The Bulldogs went 21-7 overall last winter, having their season come to an end in the Class 4 District 1 semifinals against Cape Central 64-53.

Central fell to Sikeston 76-55 in the title game, and Sikeston almost failed to reach the championship, only having beat Dexter 56-54 in the semifinal round.

Coach Unterreiner believes District 1 is the best district in all of Class 4, which Notre Dame won his first year as head coach in 2014-15.

“All you have to do is have a chance,” Unterreiner said. “The last two minutes and you have a chance — anybody can win. If you win a district championship around here, it’s a big deal.”

The Bulldogs went on to place third in Class 4 after losing to second-place Hillcrest and then defeating Bolivar 65-44 in the third-place game.

Notre Dame has failed to reach the district championship since that season, but the Bulldogs are hopeful to do so this year by following the program’s motto, “God first, others second and I am third.”

This is the philosophy Unterreiner has set for each of his players since day one of taking over the program because he wants them to buy into the team aspect of basketball.

This is what he believes has led his teams to success in the past when they were not as skilled as other teams, including last year’s team that had four seniors, who all embodied Unterreiner’s philosophy.

Leading last year’s senior class was Blake Bauwens, who averaged a team-high 15.5 points per game and also led the team in steals with 64 and assists at 3.4 per game.

Coach Unterreiner said Bauwens was the team’s “big shot” maker last season, which will be a difficult thing to replace this year.

There is only one senior returning for the Bulldogs this year, and that is who Unterreiner calls the “quarterback of the defense” in senior center Dawson Dohogne.

Dohogne was second behind Bauwens in points per game last season with 14.3, but led Notre Dame in rebounds (6.1 per game), blocks (1.3) and field-goal percentage (66).

“[Dohogne] has gotten so much better since he first came on to the stage his sophomore year and played varsity,” Unterreiner said. “He’s trimmed down, more athletic, and really if he catches the ball in the block, he’s probably going to score.”

Coach Unterreiner also said Dohogne has ranged out as a shooter, who can now even hit the three-point shot consistently, which should spread the floor for Notre Dame this year.

Other returners for the Bulldogs include junior forwards Carter Dame and Braden Noel and sophomore  point guard Tyler Landewee.

Dame was the team’s second leading rebounder behind Dohogne with a 5.6 average and also scored 7.1 points per contest.

Coach Unterreiner said Noel rotates between forward and center, but will also probably see playing time at guard this year.

Landewee was the team’s starter as a freshman in 2016-17 before breaking his elbow against Central in the regular season. He averaged 6.6 points and 2.9 assists per game while averaging 3.2 steals.

“We return some good experience that played in some big games for us,” Unterreiner said. “Tyler was a huge part of what we did because he was our guys that could bring the ball up the floor and gave [Bauwens] a breather. I expect him to start taking ownership of this team along with [Dohogne].”

Three other sophomores, guard Jack Floyd and forwards Tyler Parker and Justice Thoma, expect to have key minutes this year off the bench to gain experience.

“For sophomores to be able to help us — that says a lot about them,” Unterreiner said. “As a coach and as a fan base, some times you have to sit back and realize they are just sophomores. They are going to make a few more mistakes than others.”

Unterreiner believes he can run 11 players in a game this season, and the focus thus far in practice has been running press.

The other focus has been defense while not really covering offense because Coach Unterreiner believes offense will come naturally.