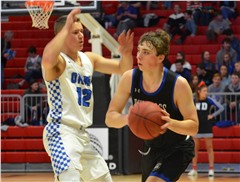 In the 16-team boys basketball Christmas Tournament that included seven blowouts by 30 or more points in the first two days, Thursday night’s quarterfinal between No. 5 seed Cape Notre Dame and No. 4 Oran was one to remember.

It was a game that included 11 lead changes in the second half, one half-court buzzer beating 3-pointer and a 1-and-1 free throw that tied the game with 2.7 seconds left in the fourth quarter.

“We’re just trying to win games right now,” Notre Dame Head Coach Paul Unterreiner said. “We’ll learn from [this game] and grow from it, and I was proud of our guys tonight. After that third quarter, half-court buzzer beat —  I think it really tested our guys.”

Hitting the buzzer beating 3-pointer was Oran sophomore Ty Johnson, which extended the Eagles lead over Notre Dame to five at 38-33 after the Bulldogs had made it a two-point game.

However, the Bulldogs were able to come out victorious by a score of 55-48 over the Eagles as senior Thomas Crippen had quite the performance in the post with a game-high 20 points.

Fellow post player sophomore Caleb LeGrand was able to score six points while subbing in for Crippen off the bench in the first quarter.

“I think one of the keys to our team is the minutes we get out of Caleb,” Coach Unterreiner said. “He’s a tremendous defensive player for us, and he’s still young and still raw. We’re still working on some things, but if he can give us two, three, four minutes a quarter, and give Crippen a breather.

“Those two guys did a tremendous job, and it wasn’t always easy getting them touches because it was pretty packed [in the post].”

Oran placed three defenders in the paint for most of the game, trying to force Notre Dame to shoot outside. The Bulldogs were able to hit four 3-pointers, but for two of the players who hit those shots, it was their only points in the contest.

Notre Dame also struggled with fouls throughout as the Bulldogs were called for a total of 19 as junior Tyler Landewee fouled out in the fourth quarter.

“We guarded better [late in the game] — we took our hands off them, and we stopped worrying about calls,” Unterreiner said. “We got to a point where we were worrying, worrying and worrying about calls instead of just doing what we have to do. I thought our guys did a really good job of adjusting in the fourth quarter.”

The bonus free throws Oran made because of the fouls by Notre Dame helped keep the Eagles in the game, but in the end it was free throws that helped lead the Bulldogs advance to the semifinals.

Notre Dame senior Carter Dame had yet to score the entire game until there was 2.7 seconds left in the fourth quarter with his team down by one at 45-44.

The Eagles only committed three fouls in the first half but later sent the Bulldogs to the line for bonus shots in the fourth.

With under five seconds remaining, Dame inbounded the ball and drove to the lane to get the blocking foul. The senior only had one shot to be able to tie the game.

Dame made the free throw, but his second shot bounced off the rim as Notre Dame was able to rebound but failed to get one more shot off as the game went into overtime.

“I’m sure he’s mad he missed his second one, but he’s a big senior leader for us — he doesn’t care about those points,” Coach Unterreiner said. “He’s from Oran, so he really wanted to win because he wouldn’t have been able to drive home tonight if he lost.

“At the end of the game, we drew up a play to get it to Justice or Carter. I didn’t care either way — just make a play. I just wanted to get it in either one of their hands and said, ‘Go to the rim, get fouled and make free throws.’ I was proud of the way they finished this game.”

Oran’s leading scorer senior Jacob Shoemaker hit his second 3-pointer of the night to give his team a 48-46 lead with under 3:30 left in overtime. Notre Dame junior Justice Thoma answered with a shot beyond the arc of his own to put the Bulldogs back in the lead at 49-48.

With 35.5 seconds left in overtime, Dame was able to give Notre Dame a four-point lead off two more made free throws at 52-48 to clinch the win for the Bulldogs.

In the quarterfinal game right before that one, No. 3 Jackson was able to show its dominance over No. 6 Delta with a 56-24 win.

The Indians only led by two points after the first quarter, but senior Payton Salyer was able to finish with five 3-pointers and a game-high 17 points to lead his team to the semifinals.

Fellow senior Colten Seyer paced Salyer with three 3-pointers of his own and scored 11 points. Senior Dalton Tollison made his presence known in the paint by finishing with 13 points. Delta failed to have a player score in double digits.