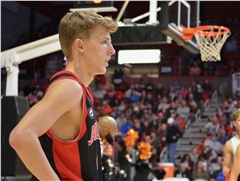 The Jackson boys basketball team reached the 74th annual Christmas Tournament Championship game for the first time in three years, but the Indians dropped their second game of the season in the contest.

In the Missouri Basketball Coaches Association’s latest rankings (Dec. 17), the Tigers were named third overall in Class 4 behind No. 1 Sikeston and No. 2 Grandview. Cape’s lone loss came to Sikeston in the SEMO Conference Tournament title game at 74-67.

Senior Payton Salyer was the only Indian to score in double digits with 12 points, while Cape was led by seniors Kinyon Hodges and Caleb Oswald, who both combined for 27 points. Hodges recorded a game-high 16 points as half of his points came from dunks.

The Indians were able to reach this year’s championship game with wins over Meadow Heights (76-50) and Delta (56-24), and then they finally upset No. 2 seed Charleston 49-44 in the semifinals.

Four players for Jackson scored 10 points or more against the Blue Jays as Salyer and fellow senior Colten Seyer tied for a game-high 12. Tollison was behind them with 11 as junior Luke Reynolds came up with 10.

In the quarterfinals against Delta, Salyer hit five 3-pointers and finished with 17 points as Seyer hit three of his own for 11.

Sayler was the only Indian named to this year’s all-tournament team and is currently averaging 11.5 points and 2.9 assists per game.

Up next for Jackson is the 13th annual Flyer Invitational this week at Lindbergh and enters as the top seed.