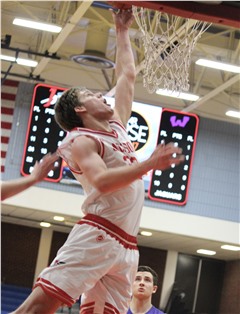 The start of the 2017-18 season has not what the Jackson boys basketball team hoped for coming in, having already lost three contests and two-straight in the SEMO Conference Tournament earlier this month.

The Indians lost their third game against Soldan by one point at 67-66 on Dec. 16, but have now won back-to-back contests, all in the Southeast Missourian Christmas Tournament.

“We’ve had two tough losses [this season], and we didn’t play well against Notre Dame, so now we are back in a position where hopefully a little bit of the pressure is off, and we can get some confidence,” Jackson head coach Darrin Scott said. “I think the biggest thing is we came in to this season thinking we were going to be really good — we worked hard.

“Some things didn’t go well, and we just didn’t play well to be honest. Then we didn’t handle in-game situations, and it cost us two games. Hopefully we learned from those things, and now we can have fun on Friday night when we play Cape [Central].”

Jackson was seeded fourth in this year’s tournament, having easily defeated No. 13 seed Scott City in the first round 82-25 to advance to the quarterfinals.

This is where the Indians met the defending Class 1 State Champions in No. 5 seed Oran to see which team would move on to the final four and face No. 1 seed Cape Central.

To start the game, senior Pete Lake went on a scoring spree, finishing Jackson’s 5-0 run over Oran with a three pointer.

The Eagles answered with a 5-0 run to tie the game as senior Layne Johnson first hit a three then rebounded the ball to eventually score two off a fastbreak.

Jackson was able to keep Oran scoreless for one minute to go on another scoring run, this time at 6-0 to take a 11-5 lead over Jackson as Lake stole the ball, scored two off a fastbreak where he drew a foul to score one more point off a free throw for an original three-point play.

Oran was not going to go away quietly as sophomore Todd Priggel hit a shot from beyond the arc to answer Jackson as Johnson then converted his defensive rebound into two points to narrow Jackson’s lead to 11-10.

The Indians hit two threes to take a 17-13 lead with three minutes, 34 seconds left in the first, which happened to be Jackson’s final points of the quarter.

Oran scored once more in the first quarter when junior Jacob Schoemaker hit his second shot of the game with 46 seconds remaining.

Jackson even called a timeout before that at the 1:35 mark of the first so Coach Scott could talk to his team since they were having trouble against Oran’s zone defense.

“The first quarter we were moving the ball really well, but we were not looking at the post,” Coach Scott said. “We called a timeout and challenged them to look to the post. We stopped moving and we started looking at the post and forcing it, and we turned it over.

“What I’ve told them is you’ve got to look, and Oran did a good job in their matchup. They were going to bring two guys to [Cameron Hester] everytime he touched the ball.”

Coach Scott told his team Hester would probably not be open on the first pass, so he knew his team had to move the ball around as well as be more disciplined with each pass.

Moving the ball around to force Oran out of its zone was how Hester was going to get open in the post, which did not happen very often in the second quarter.

Oran took its first lead of the game when Shoemaker hit his first shot from beyond the arc to make it 18-17 Eagles, but Hester was able to regain the lead for Jackson after another timeout with under six minutes remaining in the first half.

The Indians only scored six more points in the second quarter, allowing Oran to take a 30-25 lead heading into halftime.

One mainstay for the Indians in the second quarter was senior Gavin Harris, who scored Jackson’s final five points of the first half.

Shoemaker scored four more points before the half, and he also recorded two defensive rebounds to help his team take the lead.

Lake, who was held scoreless in the second quarter, helped his team take back the lead in the third quarter as he scored four points and got the assist to Hester for two, who also drew a foul to shoot a free throw.

Hester made his free-throw shot to give Jackson a 34-32 lead over Oran, which the Indians maintained for the rest of the night.

Jackson went on a 9-0 run to start the third, but then the Indians went on another 9-0 run once Oran got to 34 points, which was fueled by a three pointer from junior Colten Seyer.

The run gave Jackson a 47-34 lead, during which Hester and senior Grayson Ward took it upon themselves to dominate the boards, which they did in the entire second half.

Harris continued his success shooting from the field in the third quarter, having scored seven points for Jackson in the final three minutes to help his team take a 57-40 lead heading into the fourth quarter.

“It was nice in the second half that all of his shots came out of offense,” Coach Scott said. “We got some inside out and got some things happening, which is what we want. The way we moved the ball in that third quarter, fed the post and got some penetration — that’s the way we need to play all the time.”

Jackson only allowed Oran to score four points in the final quarter as Lake outscored the Eagles with seven in the fourth to finish with a team-high 19.

Three other Indians finished in double digits as well with Harris second in scoring with 14 points, Morris third at 12 and Hester fourth with 10 in the 73-46 win.

In the final four, Jackson will face Central to see which team will play Charleston or Notre Dame for the title.