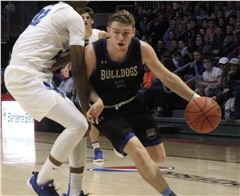 There were two different games and two opposite outcomes between the Notre Dame boys basketball team and SEMO Conference opponent Charleston last week.

Monday was the first meeting between the Bulldogs (10-3) and Blue Jays (9-2) this season, which was for the 75th annual Christmas Tournament Championship.

Charleston ended a dominant tournament run with a 64-41 route of Notre Dame to win the Christmas tourney for the second time in the last four years. Four Blue Jays finished with double digit in the scoring column as senior Terridean Bogan scored a game-high 20 points along with seven rebounds and three steals.

The other players for Charleston to finish with double digits were seniors Samuel Bledsoe [13], Isaiah Gillespie [12] and Blessin Kimble [13]. Kimble led the game in rebounds by recording 11 boards for a double double, while Gillespie paced him with six and also had two steals.

Bogan, Bledsoe and Kimble were each named to the all-tournament team as voted on by media members, while the Bulldogs placed three of their own on the team as well.

Notre Dame’s top scorer was senior Tyler Landewee, who finished with 12 points and shot 36% from the field.  He also had three turnovers while only coming up with one steal of his own.

Fellow Bulldogs senior Justice Thoma managed to lead the team in rebounds with seven, but only finished as the team’s third-highest scoring with eight points. He turned the ball over five times, which was tied for a team-high with junior Caleb LeGrand, who scored 10 points and collected five rebounds.

The Bulldogs reached the title game with a 70-54 victory over Class 4 District 1 rival Cape Central, which ended their season last year.

Landewee, LeGrand and Thoma were the three players for Notre Dame named to the all-tournament team, who also played vital roles for their team to advance to 2-0 overall in conference play on Friday night.

After suffering a 23-point loss to start the week, the Bulldogs started the weekend right with a 22-point, 73-51 win over Charleston at home.

Notre Dame only had two players finish with more than 10 points scoring, but each of those players eclipsed 20 points as Landewee and LeGrand tied for 22, which was the game high.

This time Landewee finished with a 73% shooting percentage and went 4-for-4 from the 3-point line. He also finished with nine rebounds, three assists and a steal.

LeGrand led the game in rebounds with 14 as 12 were on the defensive end of the floor, while he also dished out four assists. Thoma also finished with double-digit rebounds at 10 and produced a team-high seven assists and scored eight points.

Charleston also only had two players score in double figures as Bogan and Gillespie tied for a team-high 19 points apiece, while Bledsoe and Kimble combined for nine with five and four respectively. Bledsoe only shot 15% from the field, while Kimble only came down with three rebounds.