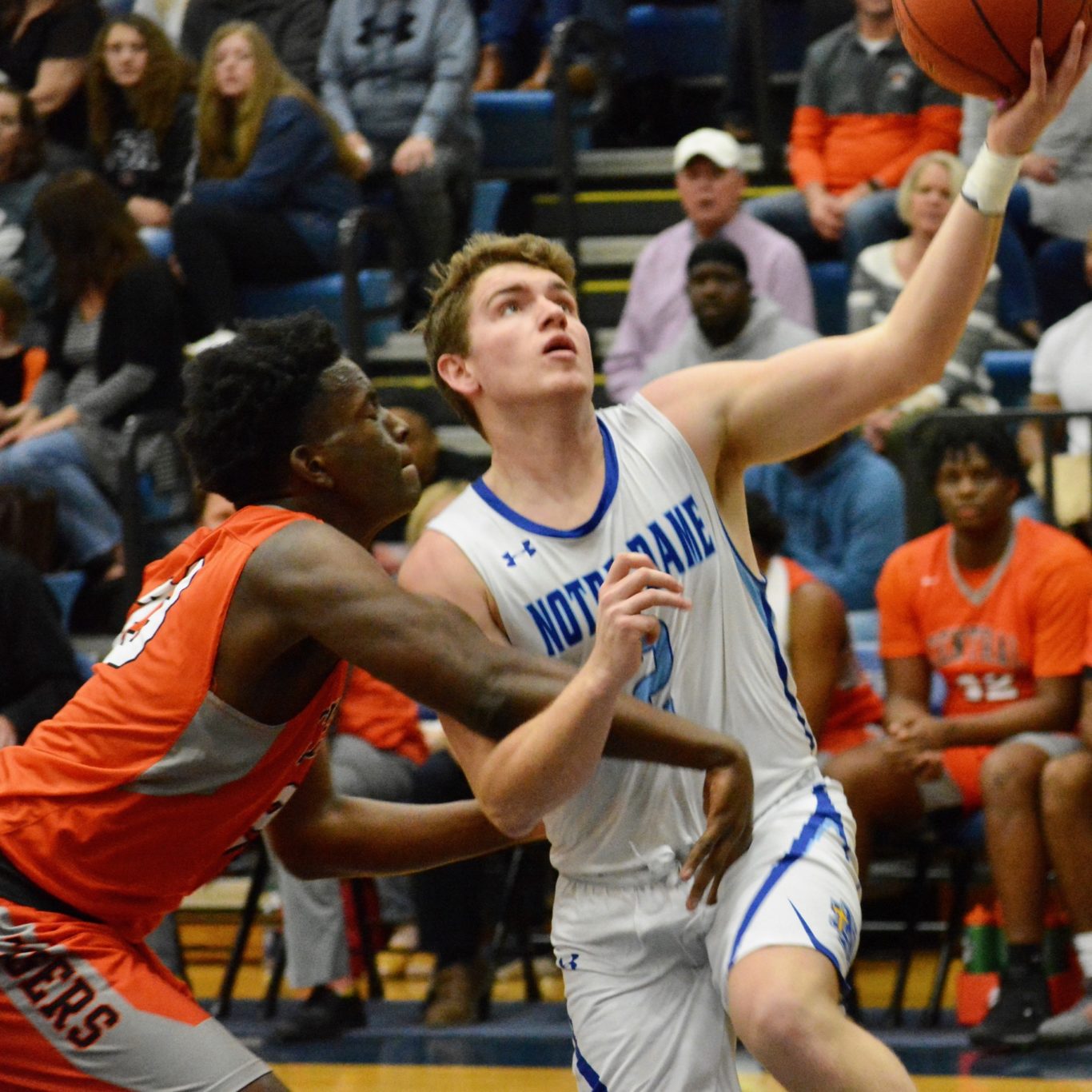 One year after the Cape Notre Dame boys basketball team’s 2018-19 season came to an end at the hands of Cape Central in the Class 4 District 1 Semifinals, the Bulldogs have now defeated the Tigers twice already this season.

Notre Dame’s first win over Central was in the 75th Annual Christmas Tournament by a wide margin of 70-54, which was followed up by a 52-44 win for the Bulldogs over the Tigers last Tuesday night at the Dawg Pound.

“[Central] changed up defensively completely from what they did [in the Christmas Tournament],” Notre Dame head coach Paul Unterreiner said. “That’s what good coaches do — you learn from one day and change it up. Drew [Church] is a good coach, and he changed his lineup and played some different guys.”

Unterreiner also felt like Central did not play as hard in the first matchup, which is something else he noticed Coach Church made sure would not be a problem last week.

In the first quarter, Notre Dame jumped out to an early 9-0 advantage as senior Tyler Landewee scored five points in the run to help give his team a comfortable lead. The Tigers scored their first bucket of the game with a little under three minutes left in the first quarter as the Bulldogs held onto a 16-10 lead heading into the second.

Notre Dame had much success passing the ball in the second quarter and were able to find some holes in Central’s defense. This helped the Bulldogs maintain their lead and head into the locker room over the Tigers, 31-24.

Landewee and fellow Notre Dame senior Justice Thoma were each tied with a game-high nine points after the first two quarters.

Another key factor for Notre Dame was holding Central senior Tyrus Reddin to only four points in the first half, but he would not be denied in the third quarter. Reddin started the third with a make from beyond the arc and scored six more points in the quarter to give the Tigers a 39-37 lead heading into the final frame.

Coach Unterreiner said he felt the reason why Central took the lead over Notre Dame in the third was because his team was playing not to lose as it only managed to score six points.

“We started getting really worked up about what was happening instead of just trusting what we were doing,” Unterreiner explained. “When our guys would just continue to play to win the game, we’re a lot better off. We’re not good on our heels, and Central played us on our heels for a while there.”

The Tigers were able to lead Notre Dame until there was five minutes and 20 seconds left in the game when senior Kam Dohogne was able to dish the ball to junior Caleb LeGrand for two to tie the game at 42-all.

The Bulldogs were able to take the lead over Central 15 seconds later as Landewee scored two points in transition off a steal. Landewee finished with a game-high 17 points along with five steals.

“That was it — the biggest thing [Landewee] did was he got some big, timely steals,” Coach Unterreiner said. “He was patient defensively, and he waited for his opportunities. When he took advantage of them, he finished.”

Notre Dame held onto the lead for the rest of the game as Landewee and Dohogne scored a combined six points from the free-throw line after the Bulldogs were in double bonus, thanks to fouls by Central.

Dohogne, who missed some time earlier this season, recorded six points, five assists and four steals off the bench for Notre Dame. Coach Unterreiner is excited to have three guards who each play vital minutes like Landewee, Dohogne and fellow senior Drew Heisserer do.

“[Dohogne] was big for us tonight, too,” Unterreiner said. “I’m telling you, in the last couple of weeks, Kam has really come on. Our guard play has been phenomenal for us. We just have to continue to keep guys fresh and trust that those three can handle the job. I’ll coach those guys any day of the week.”

Thoma finished as the Bulldogs second-leading scorer against the Tigers with 12 points as only two of them came from the line. One of Thoma’s go-to shots was the mid-range, pull-up jumper, which Landewee hit throughout the game as well.

“Anytime Justice can get a look 15 foot and in, I want him taking it whether it’s at the rim or he’s pulling up,” Coach Unterreiner said. “Tyler has gotten really comfortable offensively shooting the ball. If we can stretch out that [mid-range jumper] to the 3-point line that would be lovely, but it’s not that way right now.

“That’s a shot people tend not to guard anymore — it’s either post or the 3-point line, so if we can make that on a consistent basis, that makes us much better.”

Notre Dame (17-4, 5-1 SEMO) only has five more games left in the regular season before starting the road to hopefully winning a Class 4 District 1 Championship for the first time since 2014-15. The Bulldogs can win the regular-season conference title if they defeat Poplar Bluff and Dexter.