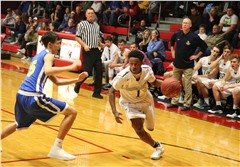 For the third-straight season, the Saxony Lutheran boys basketball team (3-0) claimed its first championship of the season in the Rolla “Duke” Herbert Tournament.

Saxony shot a total of 30 three-pointers with senior Jalen Williams having nine of those attempts, making four for 12 of his 18 points in the game.

Pacing Williams in threes were fellow seniors Dewayne Giboney and Paiton Miller, who each hit three shots from downtown. Giboney and Miller each scored 13 points for a combined 26.

Senior transfer out of Bismarck, Austin Jarvis, tied for the team-high in scoring at 19 while coming down with nine boards.

Leading the Crusaders in rebounds and tying Jarvis for most points at 19 was senior Trae Robinson, who collected 12 boards on the night.

Robinson standing at 6-foot-8 and Jarvis at 6-foot-4 with St. Vincent’s tallest player at 6-foot-3 in junior Issac Ernst, rebounds came easy, but the Indians still made it tough under the rim for Saxony.

“[Having Jarvis and Robinson as rebounders] is a luxury, but I think we can still do better,” Coach Williams said. “Sometimes they just rely on their size and ability as opposed to thinking a play ahead or, ‘Hey, that’s a long three-pointer from the corner. I need to get in front of this guy and make it easy.’”

Even though Saxony won by 31 points to claim its first tournament title of the young season, the Indians made it a close contest in the first quarter.

The Crusaders only led by three points at 19-16 following the first quarter as St. Vincent sophomore Colby Hager scored seven of his team’s points in the final four minutes.

“I’m almost happy the way it happened because we needed a little adversity,” Coach Williams said. “Those first two games we played, every shot dropped, every dunk was easy and everything just fell into place, and that’s not real. That’s like Disney-land.”

Williams said he had to have his team make adjustments due to St. Vincent’s early success, going to the “big” lineup with Robinson.

This move allowed the inside to open the outside scoring, which is how Saxony was able to jump to a 10-plus point lead in the second quarter.

The Indians kept the game within five points at the beginning of the second with Saxony leading 28-23 with five minutes remaining in the half, but the Crusaders went on a 8-0 run to follow.

This is where Robinson went on a scoring surge of his own, putting up six points in the span, thanks to multiple rebounds.

St. Vincent answered the run with a shot from beyond the arc by senior Evan Clifton, but the Crusaders went on a 20-0 run to end the first half, taking a 56-26 lead into halftime.

Giboney hit two of his three 3-point shots during the run while Williams made two of his own.

One key for Saxony’s scoring runs was how effective the team is passing the ball with Coach Williams describing it as like watching popcorn pop.

“[The ball] is going from one open guy to the next, and it’s just always leading to the  next pass and the next good look,” Williams said. “And we have so many guys that can shoot the ball effectively that it’s hard to key on any one guy because if you do then there are gaps in that zone.”

Moving forward into the season, Coach Williams said his team must improve defensively, especially on closing out to shorten the distance between ball handlers. Williams also said communication and overall physicality will be a focus to work on.