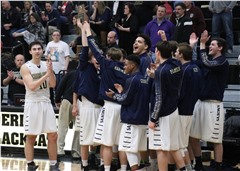 The Saxony Lutheran boys basketball team was able to punch its ticket once again into the state playoffs by claiming the Class 3 District 2 Championship.

The Crusaders managed to do so in the same fashion as last year with a win over Doniphan, this time at 56-39 as senior forward Austin Jarvis led the way with a game-high 18 points.

Jarvis had been out for a little over two months with a strained hamstring, and he also tweaked his ankle just before the start of the district tournament against Twin Rivers Feb. 13.

“He’s still getting back into the swing of things,” Saxony head coach Kevin Williams said. “[Having a performance like this] means a lot [for his confidence]. This was a guy I felt like we should win. Everything from here is a bonus, and there’s no pressure on the Crusaders moving forward.”

Heading into halftime as Saxony lead the Dons 21-15, Jarvis only had scored four points as senior guard Jalen Williams led the Crusaders in scoring with eight, six coming from three-point range.

Coach Williams said his team tried to get a feel early on if it was indeed Saxony’s night individually instead of running the set offensive scheme.

“When we ran our stuff, we made it look easy because they had trouble at certain positions stopping us,” Coach Williams said. “When we just tried to shoot it and play off the dribble we had travels and all kinds of stuff where we looked out of sync. All that ball has to do is move — it’s not brain surgery. Any good basketball team offensively will move and share. This isn’t the NBA. We don’t have to shoot it in 24 seconds, so let’s move, share the ball and set screens.”

Williams wants his team to get back to this style of play, which is how they were playing to start the season when players weren’t sure who was going to start or not.

In the second half, Saxony started to look like that team again as the offense was able to move the ball to Jarvis, who scored 12 of the team’s 16 points in the third quarter.

“Guys found him in positions where he’s just a good athlete,” Coach Williams said. “We ran the ball down the court a little better and we threw it to the rim. He’s a tough matchup for anyone because he jumps so high, so that was good to see.”

Saxony was able to jump out to a 31-19 lead because of this to eventually take an 11-point, 37-26 lead heading into the final quarter of play.

The Crusaders big man in senior center Trae Robinson was able to help lead Saxony to an 9-0 run as he dished the ball to Jarvis in the third then senior guard Paiton Miller in the fourth for three. Robinson, who finished with 10 points, also scored four points in the span, two coming from the free-throw line.

With nearly three minutes to go with a 50-33 lead, thanks to a number of runs and three made free throws from Williams, Saxony began to play keep away.

Saxony held on to its lead for the 56-39 win and its second-straight district championship, which is just one of the team’s goals this season.

“[Winning this district championship] is huge. It’s one of our goals, but it’s not thee goal,” Coach Williams said. “With everything this group has been through with all the adversity, injuries, sickness and a tougher schedule — to be 22-7 and going to sectionals to play Charleston, you couldn’t ask for anything better.”

Saxony, which will face the Blue Jays tonight, was able to defeat Charleston last year handedly at 81-68 to advance to the Class 3 Quarterfinals, and Coach Williams thinks his team matches up well against them again this year.

“If we make it a one-on-one school-yard game, we’ll be in trouble,” Williams said. “If we make their five play our five and play to our strengths and try to exploit some things that they aren’t great at, it could be a ball game.”