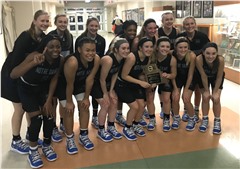 For the first time since 2010, the Cape Notre Dame girls basketball team was able to win the Class 4 District 1 Championship.

“They made a decision to work hard all season and not quit when things got tough,” Notre Dame head coach Kirk Boeller said. “That attitude they took on this year was, ‘We’re going to give it our best shot and whatever happens happens,’ carried us to where we are now.”

Scoring a team-high 14 points for the Bulldogs was senior Julia Williams, who was able to knock down two 3-pointers in overtime to help clinch the title.

Williams final make from beyond the arc gave her team a 43-40 lead with 39 seconds left in the first and only overtime period. She also made three of her four free-throw attempts while shooting 57.1 percent from the field.

Notre Dame held the lead over the Bearcats for the majority of the game until Dexter was able to tie things up at 35-all with under a minute left in the fourth quarter.

“We would get a five, six-point lead and then in a blink of an eye Dexter would tie it up,” Coach Boeller said. “I think the big thing was when Dexter would go on those runs, our girls never panicked. They were even-keeled throughout that game.

“Our girls did a really good job of staying focused and not doing too much scoreboard watching. Down the stretch we made some really key stops defensively.”

The Bulldogs came up with a total of 10 steals as senior Megan Heisserer and freshman Lexi Rubel each recorded three apiece. The two also combined for 16 of Notre Dame’s 27 rebounds.

Heisserer finished with seven points and hit two 3-points, while Rubel only put up three points of her own but distributed the ball for a team-high five assists.

Scoring a game-high 15 points was Dexter senior Maycie Martin and was paced by two-time SEMO Conference Player of the Year and Three Rivers signee senior Chaylea Mosby, who only finished with 14 points.

“[Defending Mosby] is hard to do because she’s such a phenominal player,” Coach Boeller said. “She creates her own shots and moves great without the ball. [Burger and Kellum] did a nice job of getting around screens, and they were closing out right when she would catch [a pass].”