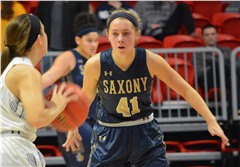 For the first time in her career at Saxony Lutheran, junior Emma Brune garnered all-state honors for basketball. She did so by averaging 19.7 points, 3.9 rebounds, 2.8 steals and 1.5 assists, while leading the Crusaders to win their seventh-straight district championship this season.

Brune, who has played and started in 90 games for the Crusaders so far, became just the fifth player in Saxony girls basketball history to be selected as one of the top players in Class 3.

This is also the sixth-straight year a Crusader has been named all-state under head coach Sam Sides, who led the program to its first-ever Final Four and runner-up finish in 2016.

“Basically, she turned up her game and became more of a scorer,” Coach Sides said. “The last couple of years she’s been more of a complimentary player — a good ball handler and defender. She’s probably our best defensive player, but this year she stepped up her game as a scorer, which we needed her to.”

How did Brune step up? She broke the program’s single-season scoring record set by Brianna Mueller back in the 2015-16 season when the Crusaders reached the state title game. Mueller scored 506 points in 31 games that year.

It only took Brune 25 contests to break Mueller’s scoring record as she finished with a total of 590 points through 30 games. Brune did not exceed 400 points her first two seasons but totaled 658 heading into this year.

“I think she recognized her role change, and that she needed to do more offensively,” Coach Sides said. “She looked to score with more of a shoot-first mentality as opposed to get somebody else open. She’s improved her game, too. She can attack the bucket, and she continues to improve her outside shot. She’s become more of a complete player.”

Another reason why Brune earned all-state accolades not only as a scoring threat but a defender as well was by holding Missouri’s all-time leading scorer in Oran’s Leah Cauble (3,788 points) to 46 points in two games. The Crusaders defeated Oran both times as Cauble, who averaged 36.5 points a game this season, put up 19 in the first contest and 27 in the final.

Mueller became the all-time leading scorer for Lindenwood Belleville this season as a junior and now has 1,583 career points in her collegiate career. Mirly is currently a two-sport athlete at Troy University, playing soccer and softball.

Brune has already verbally committed to continue her athletic career at Southeast Missouri State as a member of the soccer team. As a member of Saxony’s soccer team, Brune has been named the Class 1 Player of the Year twice, scoring 55 goals and dishing out 33 assists as an underclassman.

The Crusaders fell short of returning to the Class 3 Final Four for a third-straight year this season by losing to Licking in the quarterfinals. Brune is one of the two returning starters along with fellow junior Makayla Mueller next season in their final year.

“She’s also gotten more vocal as a leader, and she takes on that role, too,” Sides said. “The other kids listen to her because she knows what she’s doing. … She’s going to have to be an even better leader next year.”