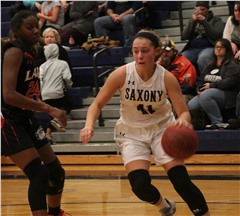 The Saxony Lutheran girls basketball team was tasked with replacing four starters heading into this season. The Crusaders had no trouble in their season opener with a 71-45 win over SEMO Conference opponent Sikeston on Nov. 20 at home.

Saxony’s lone returning starter was junior guard Emma Brune, who was able to have a career day against the Bulldogs by scoring a single game-high 28 points.

“We need [Emma] to do everything,” Saxony Head Coach Sam Sides said. “She can play defense, she can handle the ball and she can shoot. She has to be a leader, but she kind of has a quiet personality. I need her to be more of a leader because the rest of them are kind of quiet, too. She’s by far the best athlete I’ve got all around.”

Coach Sides continued to say this team will need that type of production from Brune even if it’s not scoring 28 points a game. He also said Brune is his top defender when she wants to be.

The other Crusader to finish in double-digit scoring was senior center Bri Jenkins at 13 points, who came away with eight points in the third quarter after getting in early foul trouble in the first half.

“[Bri] is a good player — she’s strong and she can jump, but she has a tendency to want to block everybody’s shot,” Sides said. “She’s going to learn to have to be more disciplined and not so much handsy, but use her body. She’s athletic enough, but she just gets her hands caught in the cookie jar too many times. We need her to have a good year.”

Jenkins finished second in rebounding for Saxony with four boards, which tied her with three of her teammates. Also coming up with four rebounds was senior guard Macey Smith and senior forwards Zoie Roth and Cass Wunderlich.

Coming off the bench, Roth finished third in scoring for the Crusaders with nine points as Smith came up with six and Wunderlich at three.

Leading the team in rebounds was junior forward Olivia Spanley at six, who saw plenty of playing time subbing in for Jenkins. She also scored four points.

“Olivia has athletic ability, but I just need her to be more intense and be more alert,” Sides said. “When we get her up to varsity speed, she’s going to be a good player. We’re going to have to have her because she can do some things.

“She’s only a step off right right now where she needs to be. If we get that solved and some other players solved, I think we can compete with most people.”

Defensively, Saxony was able to force Sikeston to turn the ball over 23 times as Brune led the way with nine, which resulted in fast-break scores. Wunderlich came down with three steals as Smith, Roth and sophomore guard Sydney Turner all recorded two of their own.

The only problem with Saxony bringing so much pressure defensively is the fouls they had in the process.
The Crusaders had a total of 26 in the game, and Coach Sides said it felt more like 50.

“We’re trying to play a little more risk-taking defense, and I expect us to commit [fouls],” Sides said. “Right now we’re just not in good enough shape to play that way, but we’re going to have to play ourselves into shape or work on it in practice more.”

Coach Sides said he witnessed his team get beat “all over the floor” defensively and that his players became fatigued early on. He wants his team to continue to play full court because they will have to turn the ball over to compete.

“I couldn’t argue with any one of those fouls — almost every one of them was a reach-in foul,” Sides said. “If you expect a different result doing the same thing that’s a mental illness.”

Sides wanted his players to adjust to how these fouls were being called instead of continuing to try to steal the ball the same way.

One reason why Coach Sides must have his team be so aggressive is because the lack of size his team has in the post with his tallest players, Jenkins and Spanley, only standing at 5-foot-11.

“It’s going to look ugly at times because we’re doing what I call ‘Helter Skelter’ by trying to cause disruption,” Sides said. “It’s a fun way to play to me, but it can look ugly sometimes. It was ugly tonight, but we’ll have to live with some of that.”

The Bulldogs only had two players score in double digits as well as Taydrianna Barnett put up 13 and Chelsie Moore finished with 10.

After the win, Sides quoted Vince Lombardi when he addressed his team in the locker room, “If you play bad and win, you’re good.”

“It’s early, but again I have high expectations,” Coach Sides said. “If we just fix up some stuff, reduce our fouling and take care of the ball — we made some silly turnovers, too. You can’t beat good teams turning the ball over especially with carelessness. We had too much of that, so we have a lot of stuff to work on. I saw a lot of good stuff, too.”

The Crusaders will have to correct these issues rather quickly if they hope to reach the SEMO Conference Tournament Championship game for a second-straight season.

Saxony is seeded No. 4 and faced No. 5 Notre Dame to start the tourney on Monday, which is being hosted at Sikeston this year. The Crusaders defeated the Bulldogs 53-47 as Brune and Jenkins combined for 26 points.

The Crusaders are now headed to the semifinals to face No. 1 seed and reigning tournament champions Dexter. Saxony fell to the Bearcats in last year’s title game 53-52 but were able to avenge the loss in the regular season with a 71-54 win.

“Every game over there we better be ready to go,” Sides said. “We have to take care of business because everybody over there is capable of beating you if you don’t play well enough. Hopefully we learn a little bit from this and get better the next game.”

Saxony will return home for a two-game slate starting with Twin Rivers Dec. 10 and then Chester Dec. 13.